The host of "Late Night" wears many hats, each of them contributing to his transformation into one of finest in his field. 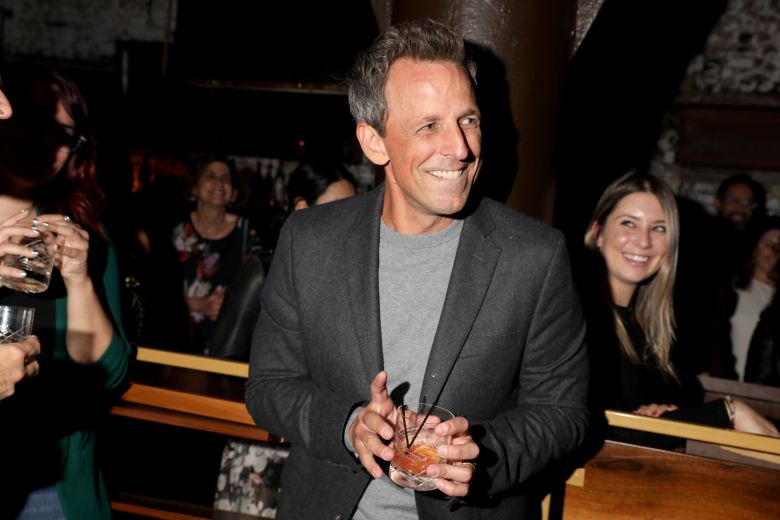 Seth Meyers is not a cuck.

Or, more accurately, he’s still not entirely sure what a cuck is.

It’s a charming admission from the host of NBC’s “Late Night” made during a sit-down with IndieWire, who earned the ire of some conservatives after a tense interview with “View” co-host Meghan McCain in May. During the conversation, the pair discussed McCain’s efforts to link comments from Congresswoman Ilhan Omar (D-Minn.) to an April shooting at a synagogue in San Diego.

While McCain grew frustrated with Meyers’ call for everyone – including McCain – to be careful with the language they use, particularly when referring to people in a minority, the host held his ground, proceeding in a polite but pointed manner.

Not polite enough for some, however, as McCain’s husband and founder of conservative website The Federalist, went on a now-deleted homophobic Twitter rant about Meyers, accusing him of being anti-Semitic (Meyers’ wife and children are Jewish) and that everyone hated him and, ultimately, dropping the C-word.

It was a Twitter tantrum for the ages, but for the unflappable Meyers, it was just another day’s work. “I was really happy that Meghan made the time and came to the show and you know, hopefully she feels as though she was treated decently, but when it was over, we thought that we handled it as well as we can have,” he said earnestly.

This kind of political imbroglio isn’t anything new for Meyers, who joined the cast of “Saturday Night Live” in 2001 and served as head writer for eight years before taking over “Late Night” in February 2014, shortly before the wheels fell off American politics as we knew it.

The host grew up in New Hampshire with a vague interest in politics, thanks to Presidential hopefuls coming to stump, but it wasn’t until “SNL” that Meyers began honing those specific comedic instincts.

“You work at some place like ‘Saturday Night Live’ and there’s always a market for political writing. I grew into it there and then right around the time we got this platform to do [‘Late Night’], it all [politics] sort of fell to pieces,” Meyers said.

“We made this decision to make the first act of our show as much about the day’s news as possible and to challenge ourselves to come up with as many things as possible that are unique to that specific day,” he continued, talking about the show’s in-depth focus on news, as opposed to just entertainment. “And certainly we live in a time right now where what’s unique to any given day is more often than not coming out of Washington D.C.. And there’s obviously an optimism that it won’t be a permanent era that we’re living through. But that’s certainly the era we’re living through right now.”

So if Meyers isn’t a cuck, then what is he?

When asked if he ever dreamt of hosting a different late-night show, potentially taking over the reins for one of his competitors, Meyers quickly shot the idea down. “One of the keys to doing these jobs and being happy is making them feel like home, because otherwise they just become a grind that wears you down.”

“But if you make it as nice a place to be as your actual home, then you want to live there and you want to be there for a long time. And ultimately, like any home you live in, there are things you don’t like about it that you work on,” he continued. “And, and maybe you put some time aside that, and you know, this summer we really do have to build that shed.”

“We think that the key to our happiness is being in the present and the key to the show being good is us being happy. So if as long as can make both of those things work at the same time, it’s a good product.” 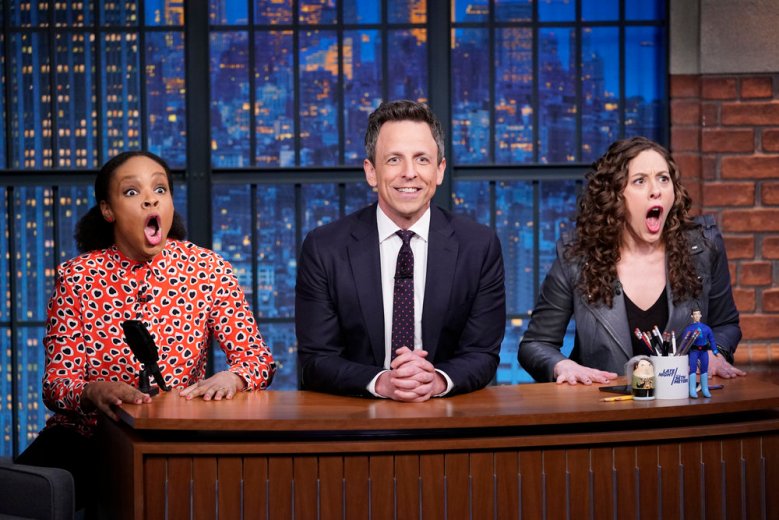 Meyers obviously can’t testify to how well those ideas have been implemented at “Late Night,” but his writers certainly can. And do.

“Late Night” writer Amber Ruffin scoffed when asked if she’d prefer working on another show. “Girl, everyone knows at least someone on every show, and everyone tells everyone everything,” she said. “I am very confident that we are on the best show to work for, with the happiest staff. I know for a fact that we are.”

“We have just new blood and new people and a new way of thinking that makes it the best place to work,” she continued. “That and we don’t fucking work Fridays.”

Beyond the Fridays off, though, Ruffin knows there’s something special about “Late Night,” and a big part of that is due to Meyers.

“A lot of people get a new job [in late night], struggle and get fired and never really find any footing or confidence, but we were allowed so much leeway that we ended up with these pieces that, I feel, are honestly great and that perfectly showcase our voices,” she explained. “A lot of shows don’t have that, they don’t have the patience for it. But Seth could write his own show, Seth could do this show with no writers. Technically, he could, because he’s been writing jokes for so long. That gave us room, so that we could hand in imperfect things and let him perfect them.”

Fellow writer Jenny Hagel echoed much of what Ruffin said, pointing out one thing in particular that she thinks puts Meyers on another level when it comes to working with writers.

“He’s just really generous,” Hagel said. “He’s generous with compliments. He’s generous with credit. He’s generous with advice. And he’s also just a phenomenal writer. So if I bring in a piece that’s like halfway there or needs some shaping, I think a different kind of boss could be like, ‘Oh no, it’s not quite ready. Let’s toss it.’ But Seth takes the time to be like, ‘You know what? I think this can work if we do this and change this and alter this.’

He’s definitely an improv guy. In fact, it’s improv that allowed him to take a job that rested so heavily on his ability to interview people without, you know, actually having interviewed anyone. “So much about being a good improviser is listening, and trying to be as much at the moment as you can be with whoever you’re talking to,” he observed.

But before taking on “Late Night,” Meyers needed to hone his listening skills. It turned out he had the perfect subjects close at hand. “For like the six months leading up to when the show started, I just tried to be a better listener to my parents. In the years leading up to this decision, I had maybe tuned out a little bit while they were talking. They have may have had some verbal tics that I’d grown accustomed to,” he admitted.

It is a little easier on the show, as the host credits researchers and segment producers who set him up for success for his interviews, but ultimately Meyers tries to play things fast and loose.

“Once the interview actually starts, I try to not have too much of a plan and live way more in the moment, as opposed to, you know, in my head be thinking these are the six things I want to make sure I ask before our time is up,” Meyers explained. 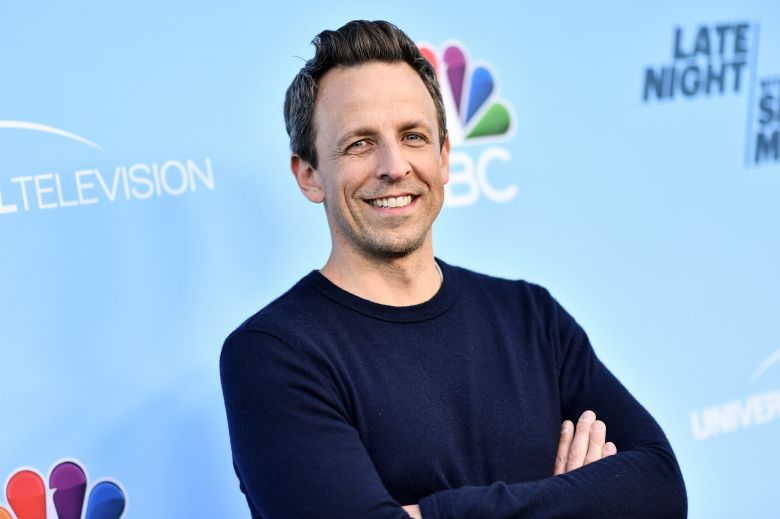 Of course, being on “Saturday Night Live” for over a dozen years and hosting a late-night talk show for five means that you’re something of a known entity, but Meyers – unsurprisingly – has his own take on celebrity.

When asked about his “Game of Thrones” fandom and what it was like to be “known” as a fan of anything – to the extent that it’s included on his Wikipedia page – Meyers had a simple explanation.

“The reality is, when you put celebrity in front of anything, it usually means ‘at a lower level.’ Like, I won at celebrity poker. That doesn’t mean I’m good at poker. It just means I’m good at bad poker,” he said.

“And you don’t want to over-promise yourself to real fans because the last thing I want to be is a poser. There’s no shortage of ‘Game of Thrones’ fans,” he continued. “19 million people watched the final episode!”

“You know what I am a fan of,” Meyers continued, riffing. “Alec Guinness’ ‘Tinker Tailor Soldier Spy,’ the BBC show from fucking 1979. If you really want to talk about the thing I’m a fan of, that’s it. Because I feel like that’s not out there.”

Above all else, however, Meyers is – and maybe always has been – a host. And right now, he’s where he needs to be.

Asked if there are days where he’d rather pack up his family and move to a desert island, Meyers took a pass.

“I’d rather stay than run. I find it very cathartic to have a place every night, a home, to work through issues. Especially to an audience that is there to spend that time with you,” he reflected. “I think the world is still a better, a more peaceful place to be right now than a desert island. Because ultimately on the desert island, you would know the bad things would still be happening.”

This Article is related to: Awards and tagged Late Night with Seth Meyers, NBC, Seth Meyers