Plus, his motorcycle boot closet had a totally different look in an earlier shoot. Drew Tarver and Heléne Yorke, “The Other Two”

Justin Theroux has been shown to have a good sense of humor about many aspects of his persona, and in the latest tribute, it’s his interior decorating that’s targeted.

Comedy Central’s showbiz satire “The Other Two” takes on pop culture and the concept of fame in a biting yet affectionate way. Look no further than its treatment of “The Leftovers” star Justin Theroux, or as one character identifies him: “LEGO Ninjago.” Although the actor doesn’t appear in the series, a version of his apartment does.

In the series, adult siblings Cary and Brooke Dubek (Drew Tarver, Heléne Yorke) are struggling with their careers when their 13-year-old brother Chase Dreams (Case Walker) becomes a viral singing sensation overnight and begins a media tour to capitalize on his fame. Their mother Pat (Molly Shannon) goes along for the ride, and they end up bunking at Theroux’s New York apartment since Chase’s manager Streeter (Ken Marino) represents Theroux for his hitherto unknown music career.

IndieWire spoke to series co-creators Chris Kelly and Sarah Schneider, along with Yorke, to get the behind-the-scenes scoop on what Theroux’s digs look like in the hilarious universe of “The Other Two.” Kelly revealed that the show didn’t want to have one central location to return to – like the “Seinfeld” apartment – but that it would hop around to all the various locations in New York: a party, a movie premiere, the set of a music video, a plane, on the set of “Watch What Happens Live!”

“But we knew that they needed to live somewhere. So if we were going to return to some place over and over again, we wanted it to be interesting. We wanted the place in and of itself to be funny. So then we decided to have him live somewhere famous,” said Kelly. “We just thought Justin Theroux’s house was very inappropriate for a child and his mother to live in that it would feel very masculine and cold, a lot of hard edges, just not very inviting. So, that’s how we came up with him and it was fun to brainstorm a bunch of different weird rooms for his house.” 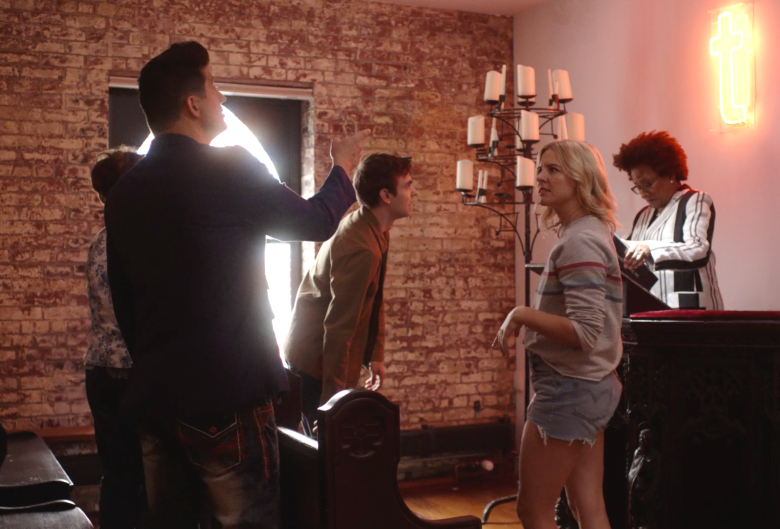 The one-bedroom, three-sauna home features an oversized photo of the actor in the living room, hard concrete chairs, a Japanese zen garden-style coffee table, a swimming pool with giant orbs floating in it, a motorcycle toilet that flushes if you rev it, and a church-like room for worship that features a glowing cross that looks a little off.

“That’s a ‘T’ for Theroux because Justin believes in himself so much,” Streeter explains.

Marino is friends with Theroux, and the show had his permission to depict this fictional version of his home throughout the process. “It’s not a skewer; it’s a loving tribute,” said Kelly.

“We don’t know exactly what his house looks like, but, when you see him, you kind of get this impression. So that’s what we were hoping for, that you don’t know things to be specific about him, but when you see them, and you think, ‘That makes sense. He maybe would have a motorcycle toilet in real life.’ It could work. We should patent it.”

A few interior design ideas unfortunately never made it to the screen. Schneider said, “Nothing that we thought of went too far, but just for production reasons we couldn’t execute a couple of things. A couple of other ideas that we talked about were basically a room of curiosities, a lot of taxidermy things and little things in jars with formaldehyde – that kind of vibe. But that was all just insanely expensive to rent, as you might imagine, let alone fill a room with it.” 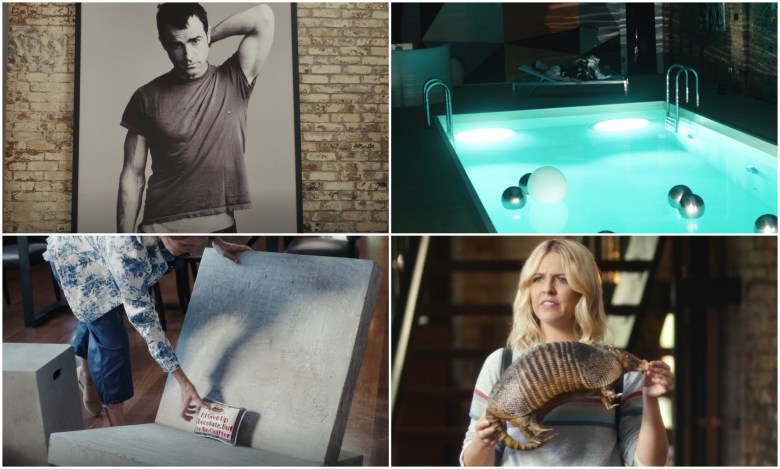 “The Other Two” Justin Theroux’s apartment

The creators also played around with the idea of an apothecary room “with the little bottles and potions, powders and stuff.”

“I think the church was originally the apothecary room, so it was a combination of what we found funny, and what was possible to pull off with the time and money we had. And then also, once our locations manager Justin Kron found the location, that had so much stuff [in it],” said Kelly.

“The pool, for example, was not in the script. Originally, I think Molly Shannon’s character slept in a tanning bed. But then there was a pool. So we were, oh, let’s make her sleep by the pool. ‘We’ve got to put that on camera. It looks like a lot of money right there. It looks expensive. Let’s do that.'”

One purely visual gag that none of the characters remark upon is the massive walk-in shoe closet where Brooke sleeps in because it has a massive tufted ottoman in the center. As she walks inside, she’s surrounded by rows upon rows of shelves up to the ceiling filled with black motorcycle boots in various styles. This plays off of Theroux’s known aesthetic for wearing motorcycle jackets and all black; it’s also a callback to the motorcycle toilet.

Yorke revealed that at first the concept was that the closet was filled with boots of all styles and colors.

“We did it that way one time and then changed it. It’s just a bunch of boots – they had gotten these cowboy boots and all this stuff and it just didn’t make sense,” said Yorke. “Justin Theroux would have only black boots. Yeah. And so we went with motorcycle boots, and when I met Justin Theroux he was wearing black motorcycle boots.” 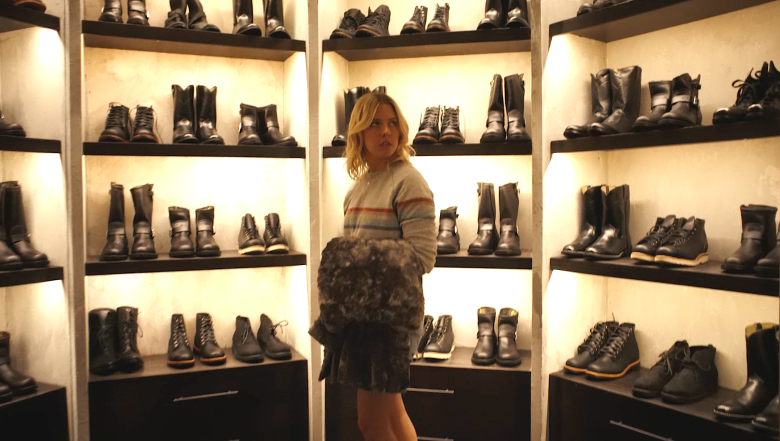 Heléne Yorke, “The Other Two”

Although “The Other Two” made up everything about the apartment, this was one detail that was uncannily accurate. During a panel for the series during the Television Critics Association press tour in February, Marino said that Theroux had seen the episode.

“He loved it… he thought it was terrific,” said Marino. “In fact, he texted me a picture of his real boot closet, which was very similar to the boot closet in the [series].”

“The Other Two” is currently available to stream for free on the Comedy Central website.

This Article is related to: Awards and tagged Comedy Central, Consider This, Emmys, The Other Two