It took several iterations to figure out the best opening for setting up Woody's reunion with Bo Peep.

The “Toy Story” sequels are renown for their playful and imaginative prologues: Buzz’s video game battle with General Zurg in “Toy Story 2,” and Andy’s wild, wild West playtime adventure in “Toy Story 3.” Trying to top those for “Toy Story 4,” however, became its own special challenge, given the need to reintroduce Bo Peep and explain her absence from the franchise.

Although the Pixar team went through several fun-filled iterations, they landed on the perfect flashback that not only delivers a thrilling rescue of RC (Remote Control car) in a rainstorm, but also a bittersweet goodbye between Woody and Bo Peep as she’s passed on to a new child. Best of all, it brilliantly foreshadows their complex journey to come and Woody’s existential crisis, in his choosing to stay with Andy rather than running off with her.

“We went through many versions of what the opening would be,” said head of story Valerie LaPointe. “We had the toys coming to life in Bonnie’s room in the way that we remember the first film, and explored a lot of playtime scenarios, like imaginary playtime similar to ‘Toy Story 3.’ Some were with Bonnie and how different it could be in her mind…then we had a clash of playtime between Andy and Molly, and a favorite was a zombie musical.  We actually have a whole canon of them now, of deleted scenes.”

But credit director Andrew Stanton (“WALL-E,” “Finding Nemo”), who’s been a significant screenwriting contributor to the “Toy Story” franchise, for eventually devising the “Operation Pull Toy” flashback that takes place nine years earlier. Having already hatched the idea of bringing Bo back (secretly, it turns out, during the making of “Toy Story 3”), there were obviously a lot of goals to establish for setting up “Toy Story 4.”

“We had to design all new toys and come up with a whole new room for Molly,” added LaPointe. “We had to get Bo back to life in her original form with the lamp and the sheep. The sheep even play a bigger role now and have names [Billy, Goat, Gruff] and personalities. And I love how we made them girls. We put Andy’s red hat on so people remember Andy. We had to think of the iconography and previous imagery.”

Initially, the dazzling rescue mission in a rainstorm didn’t involve RC. First, it was the robot and then one of the aliens because it was more recognizable. ” But then we wanted the stakes to be higher and we landed on RC for a couple of reasons,” LaPointe said. “Because he has his wheels that are turning and can get stuck, but also RC is not in ‘Toy Story 3,’ so it created this heightened level of awareness with people wondering if maybe this was the moment he got lost.”

The biggest strength of the flashback, though, is reintroducing Bo (voiced by Annie Potts) in ways that were familiar and new. She’s displays an active leadership role in taking charge of “Operation Pull Toy” from Molly’s room, thinking quickly and improvising when Woody runs out of toy cords. “Right away we could see the status level between her and Woody is equal,” said LaPointe. “It’s re-grounding the audience because it’s a while before we see her again as a lost toy. She’s always been an instrumental character for him in the previous films, the person he confides in or sets him back on track, even though she plays a small part.

“And she’s unique in that she’s porcelain and part of an appliance, a lamp. And she’s specifically for babies or little children, so she would be passed along sooner than other toys and would never get the full toy life. And so things started falling into place where she’s the perfect character to have gone to the next step and become a lost toy and thereby changing Woody’s point of view on that.”

Sure enough, after the rescue of RC, Molly gives Bo Peep away to another family, and Woody tries to rescue her before driving off. Alone, underneath the car, Woody first offers to sneak Bo and the sheep back to Andy’s room, but Bo is way ahead of him. She’s not Andy’s toy. But, in a tender, romantic gesture, highlighted by a stunning profile shot, she hints that they could run away together. Woody almost goes for it until Andy bursts out of the house in a panic about his lost toy.

“There had to be a lot of subtlety,” LaPointe said. “There was lots of debate about hinting at the possibility of leaving Andy. Does he put his hands on the box? Does he start to lean forward? But I think we found the right balance where he starts to lean forward, looking at Bo, but then hearing Andy come outside. It switches his attention and he realizes he can’t go. And there was a lot of subtlety in how we play Bo Peep: we didn’t want to have her be angry with him, forcing him to go. She just wants to throw it out there. And the animators had a challenge with still trying to keep her limited with the porcelain and adding that melted quality to her face, still being able to emote to that level that humans can.” 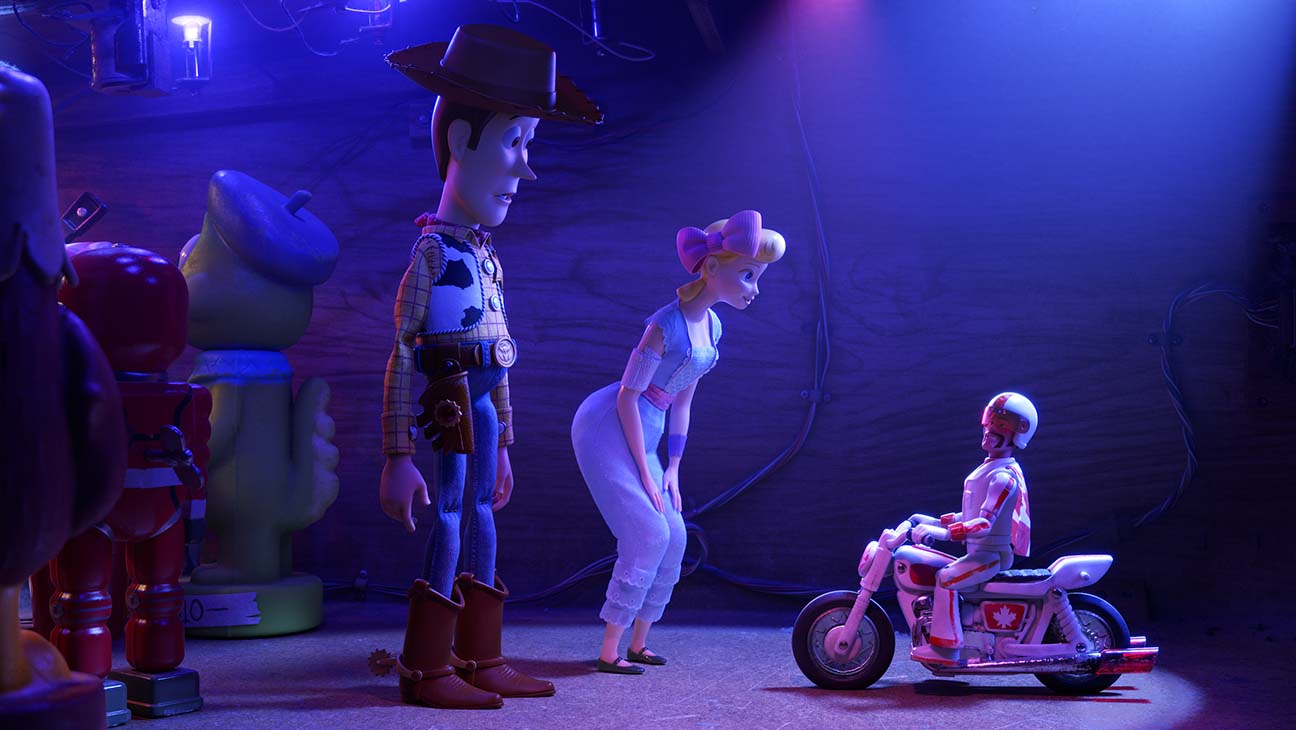 Indeed, the Pixar animation team upped the character work of both Woody and Bo with new rigs for improved movement and gestures, and the latest in surfacing and eye intricacy. Of course, it also benefited from the brilliant vocal work by Tom Hanks and Potts, who performed together for the first time for greater interaction and intimacy. The shot of Woody lying face down in the rain, with a look of mournful regret after Bo drives away and out of his life, is unforgettable. A smile returns to his face when Andy retrieves him, setting up the major conflict for Woody: What’s to become of him after Andy, when he’s no longer the favorite toy?

Therefore, Woody’s fear of being a lost toy must be grappled with throughout “Toy Story 4.” And Bo Peep provides the best example with her liberating, fearless, every day’s an adventure credo. It’s actually a continuation of Stanton’s “Finding Nemo” theme of change being inevitable and necessary. “It’s nice at Pixar that we have multiple generations,” said LaPointe, who came to the studio in 2006 as part of the middle generation. “Combined we have different life experiences and perspectives that all contributed to finding the story and then discovering these characters.”

This Article is related to: Film and tagged Disney/Pixar, Tom Hanks, Toy Story 4