The HBO sketch series is the first with a cast of entirely black women, and an all-black women writers room. 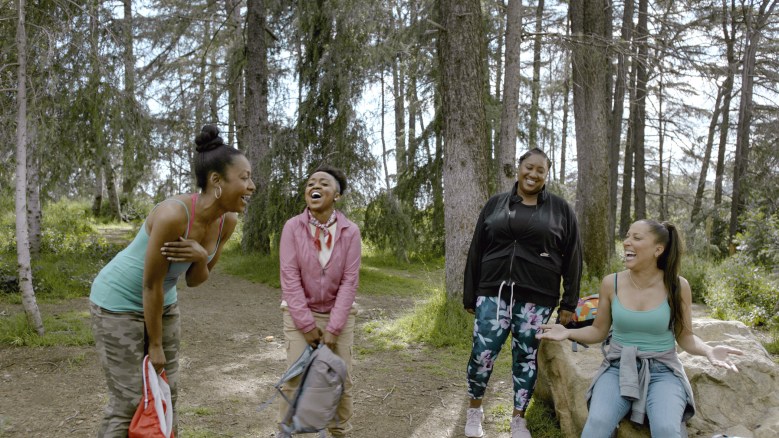 Robin Thede’s new HBO series “A Black Lady Sketch Show” has already made history: it’s the first sketch series cast comprised entirely of black women, and it boasts the first all-black women writers room. These landmark achievements are as much a credit to the creators of the series and HBO for taking a chance on it, as they are an indication of how the television comedy landscape has failed to be inclusive of black women’s voices in a meaningful way. Thede is aware of these particulars, and for her, as well as executive producer Issa Rae and director Dime Davis – who were all present for a panel at the Television Critics Association’s summer press tour – the show was a no-brainer.

“That’s how I pitched it,” Thede said in response to whether she was aware that it was a groundbreaking idea when she met with HBO brass to sell them on it. “I said to them, ‘You know what we should do? Something that’s never been done before.’ So yeah, I was aware.”

But did that awareness influence her approach to the series, or place any undue pressure on her team to be circumspect? Not for Thede or Rae; although for director Davis, if there was any pressure at all, it came in the form of satisfying Thede’s ambitious aesthetic vision for the show.

“Robin’s vision was so specific, cinematic, magical and grounded, which is a lot to put on a sketch show,” Davis said. “So, for me it was very important to capture all of that and make sure it’s funny as hell. And I think that we accomplished that.”

The show came together rather quickly, about a year ago, after Thede sent text messages to her three cast mates: fellow comediennes Ashley Nicole Black, Gabrielle Dennis and Quinta Brunson, with whom she’d been friends for several years. The message sent asked if they would like to develop a TV series together. They all said yes, and the rest is history.

On January 28, 2019, HBO announced it had ordered the half-hour sketch series, written and created by Thede, with Rae executive producing via her Issa Rae Productions.

And with the pick up, Thede wielded far more creative freedom at the premium cabler than she did at basic cable TV network BET, where her late-night talk show, “The Rundown with Robin Thede,” was canceled in July 2018 after just one season.

Thede said: “[Executive VP, HBO Programming] Amy [Gravitt] was like, ‘Do more. Be crazier.’ It was great. We pushed it. I have never ever worked with a team this supportive of a vision of mine and it’s so ridiculously fun.”

That freedom encouraged a near-boundless imagination for the show’s creative team, who developed sketches across every genre, in a conscious attempt to represent a full breadth of black women experiences.

Additionally, for her, this celebration of varied experiences also had to be intersectional. Said Thede, “It was important that we had a plus-size woman on the show; different skin tones; different age ranges; that we hit matters that are important to different economic statuses; to the LGBTQ community; to all sorts of different people – Afro-Latinas, Afro-Caribbeans, first generation Africans. We wanted to show the variety amongst black women, so that a show that seems very singular can be universally funny and appreciated.”

The title was originally “The Black Lady Sketch Show,” which suggests a monolithic black female experience. Further consideration led Thede to change it to “A Black Lady Sketch Show” which informs the audience that this is just a single television experience, with the expectation – or maybe even the hope – that there will be many more to come.

The series features a veritable who’s who of black women in Hollywood as guest stars, from Angela Bassett to Lena Waithe, and exec producer Issa Rae herself, to Gina Torres and starlet Marsai Martin, to name a few. Thede and Rae were just as aggressive in terms of who and how many they approached as they were in their pitch to HBO.

“We were ambitious,” said Rae. And luckily they faced little, if any, resistance from the “dozens” of black women celebs they wanted on the show. The only hurdle was scheduling, but the excitement they witnessed was palpable. “Everyone that we reached out to was just so enthusiastic and were like, ‘What? This exists? I would love to do it’,” she said.

To be sure, while it is titled “A Black Lady Sketch Show,” black gentlemen are not entirely left out of the picture. David Alan Grier, Larry Wilmore, Lil Rel Howery, Jermaine Fowler and others make appearances in series sketches.

The show marks another producer credit for Rae, who continues to expand her media footprint since the 2016 premiere of her HBO series “Insecure,” which the multi-hyphenate doesn’t expect will return for a fourth season until 2020 and then will unfold over 10 episodes.

“We’re writing it right now, and we’re shooting in September,” she said.