Director Tom Jennings on how his new film strives for a full, honest look at what went into the iconic, decades-long program to reach the moon. 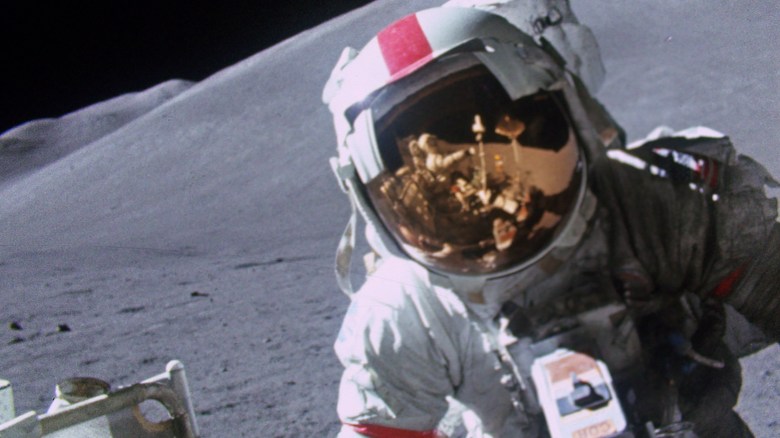 Astronauts on Moon for Apollo 15.

Imagine a documentary where citizens rail against government spending on science-based initiatives, women are constantly asked by media what it’s like to work in a male-dominated profession, and a vocal group raises doubt about whether or not the Earth is round. Now imagine it takes place a half century ago.

It’s part of the surprise of “Apollo: Missions to the Moon,” a film that may have the hook of the famous Apollo 11 moon landing, but ends up extending beyond those few days in July 1969.

“We want to try and make it relevant. This isn’t just a nostalgia trip,” Director Tom Jennings said. “It’s nostalgic in the sense that it can transport you back in time, but you can also judge how much have we changed – or have we changed at all. Are the issues the same or do we just have different hairstyles and clothing? How can we look back at time and hold a mirror up to ourselves today?”

“Apollo: Missions to the Moon” focuses primarily on archival footage from this specific period in the 1960s and 1970s, when NASA was still actively pursuing lunar touchdowns. Without the aid of modern interviews that look backward to illuminate the past, the film stays immediate by gathering together media reports, private on-board camera footage, and candid looks inside newsrooms, control rooms, and living rooms. Jennings wanted to make sure that, in the process of showing the gradual progression of these successive journeys to space, that each bit of visual information was true to the point on the timeline that the film is portraying.

“We wanted to do this definitive primer for a television audience and we wanted to do it with only the material at the time. We wanted to back it up in a way that everything in it is authentic. We don’t borrow a moon shot from 1972 because it’s better than the one we have for 1967,” Jennings said. “Everything in it is from the missions. Everything in a proper chronology. There’s nothing fudged. We wanted to be able to make people really feel like they’ve been flown back into the 1960s and come away with a sense of the entire program and what it was like to be alive at that time.” 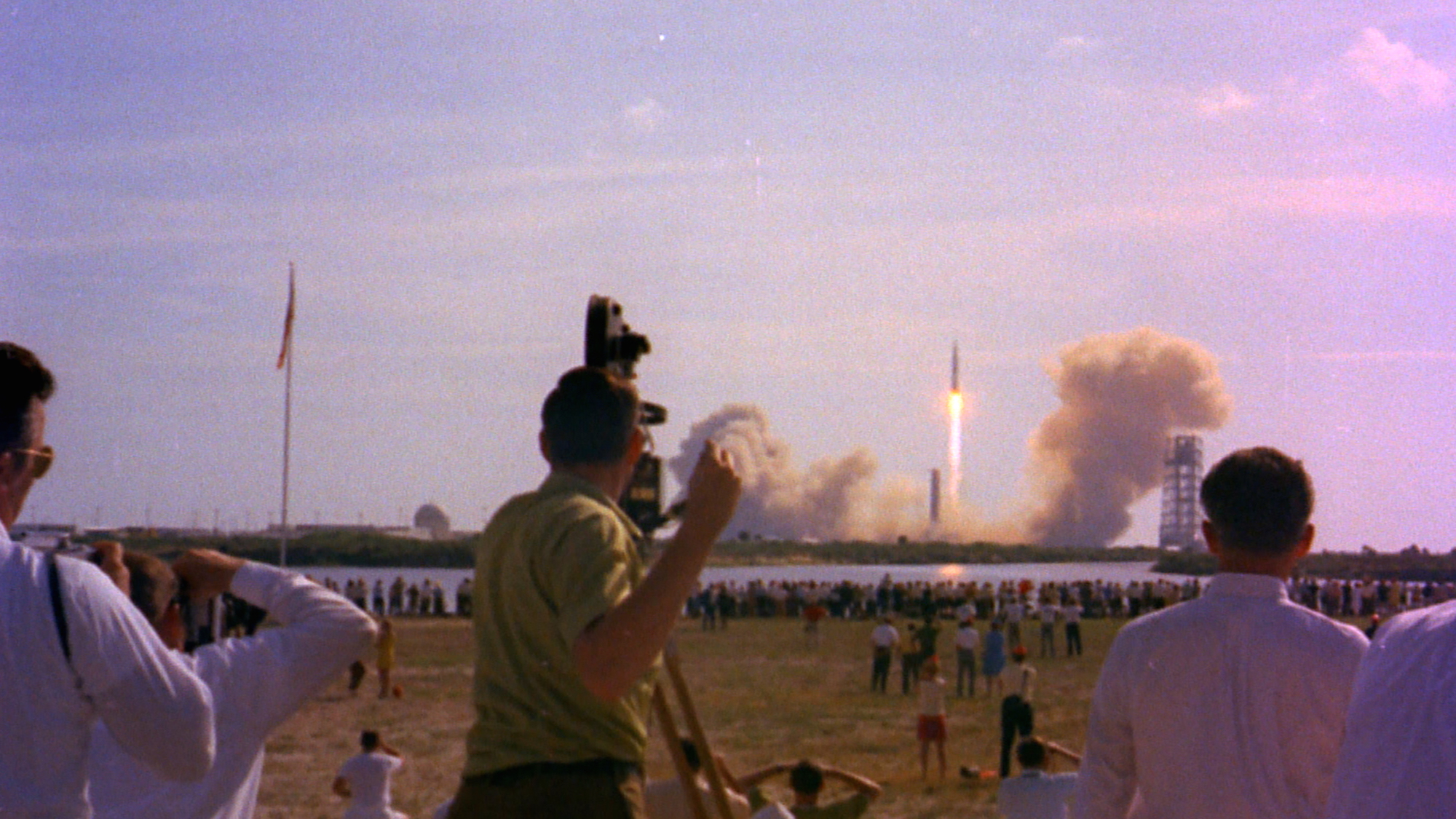 Of course, not everything has stayed consistent over the intervening five decades. Jennings said that one of the things that caught him off-guard about the time was just how simple the technology was in areas as disparate as the Apollo rockets’ onboard computers and the in-studio media setups. That simplicity helps lend a greater air of drama because it doesn’t have the modern bells and whistles.

“With Apollo 13, we particularly liked the BBC’s James Burke, in some ways the British Walter Cronkite, who was there for all of them. When Apollo 13 is having all those problems, he’s just holding a model at his desk. He’s got a pencil and he says, ‘The problem is the only engine working on this thing right now is this one.’ What’s funny is it does show through media how far we’ve come, because we would have such slick graphics today. But at the same time, that’s all I really needed to see. The guy with the pencil and the model? I get it. Simplicity can be best.”

No discussion of the Apollo program is complete without a consideration of the tragedy of Apollo 1. Three astronauts — Gus Grissom, Ed White and Roger Chaffee — died during an accidental fire that broke out inside the capsule of the rocket during a pre-launch test session. The film uses some terrifying audio from all sides of the tragedy, made even more harrowing by the fact that prior interviews with Grissom show how he and his fellow mission members knew that what they were attempting was extremely perilous. Jennings wanted to make sure that the film carefully acknowledged those realities while being respectful to their memories.

“We went over and over that section to make sure that it told the story well and it told it in a way that elicited the amount of information that we wanted to get across, and also the emotion that people experienced at the time,” Jennings said. “These were the guys that were willing to do whatever it took to keep pushing. This wasn’t a game for them. They knew how dangerous it was, that there was the risk of tremendous loss. And I think we needed to show what was lost by showing who they were prior to the fire.” 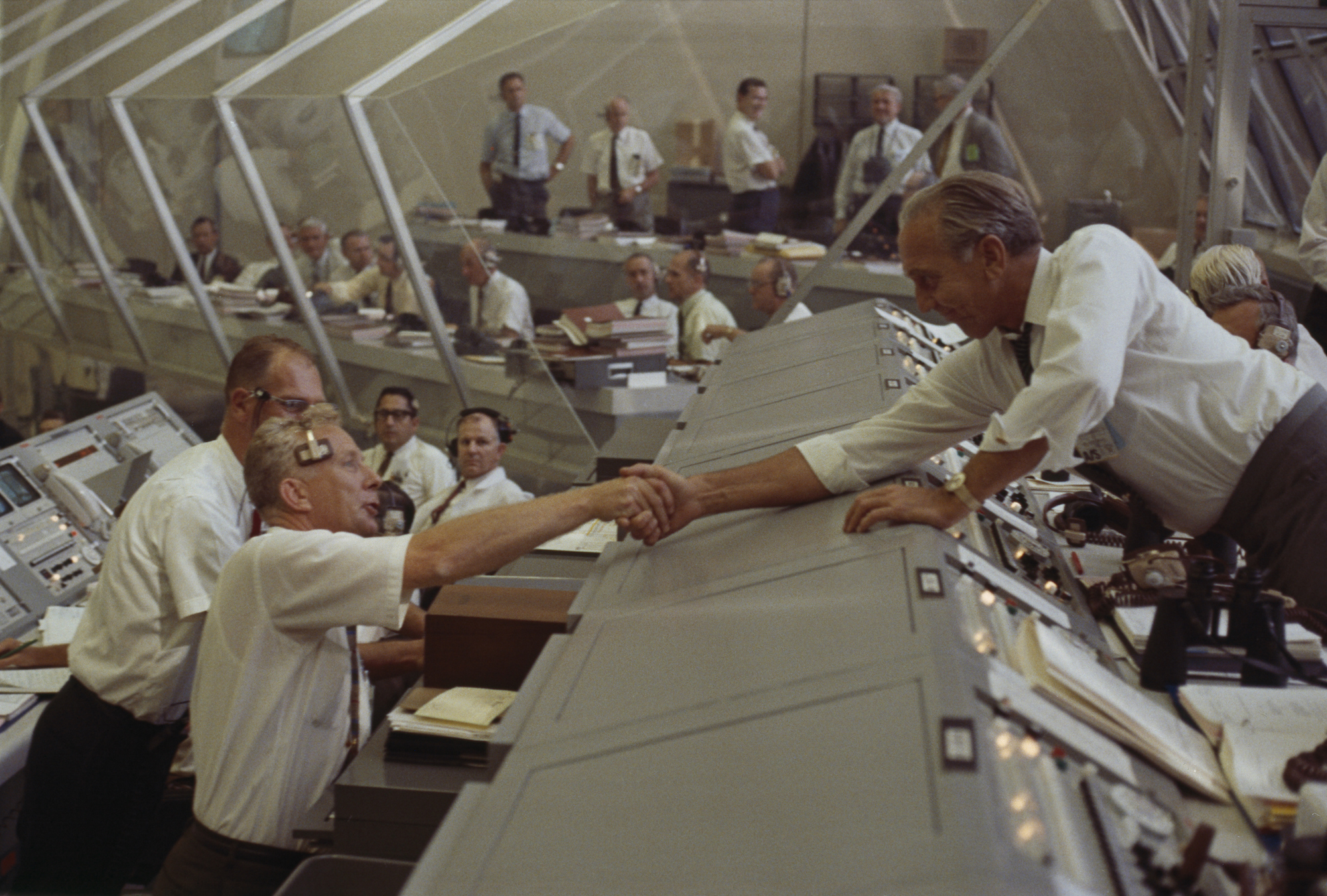 Flurry of handshakes erupts after successful launch of Apollo 11.

Following a number of people throughout this process meant showing key figures at every stage of the process, from operations specialists to those few who experienced life in outer orbit. Jennings singles out Poppy Northcutt, a technical engineer who worked in the Apollo 8 control room and was crucial to subsequent lunar missions. Part of the challenge of “Apollo: Missions to the Moon” was keeping focus on individuals like Northcutt while also portraying the sheer size of how many people it took to complete these various projects.

“I didn’t realize how big the Apollo program was. There were 400,000 people that worked on Apollo. They had subcontracted with 20,000 businesses outside the government to work on it. I knew it was big, but those numbers, like with the US’ Saturn V rocket, you just can’t wrap your head around the size of the project.”

With an overarching subject that literally extends beyond our own perception, it would be simple to lose sight of the individuals that helped this program go. Within that scope, “Apollo: Missions to the Moon” also brings out the humanity of the people who helped power such a mammoth achievement.

“After going through so many hours of watching them, they were special, but they were just determined individuals who happen to be in the right place at the right time to take advantage of this amazing program called Apollo,” Jennings said. “They actually became more real to me than when I was a little boy and thought they were gods. But in becoming more real to me, they became that much more special because now I can appreciate them as an adult. They’re that much more impressive because they were men and not gods. I’m really grateful to have been able to go through so much footage and listen to them over the years. They really are remarkable individuals.”

“Apollo: Missions to the Moon” premieres Sunday, July 7 at 9 p.m. on National Geographic.

This Article is related to: Television and tagged Apollo: Missions to the Moon, National Geographic, Tom Jennings