Alexandre Aja's aquatic monster movie is strictly by the book, but not devoid of purpose. 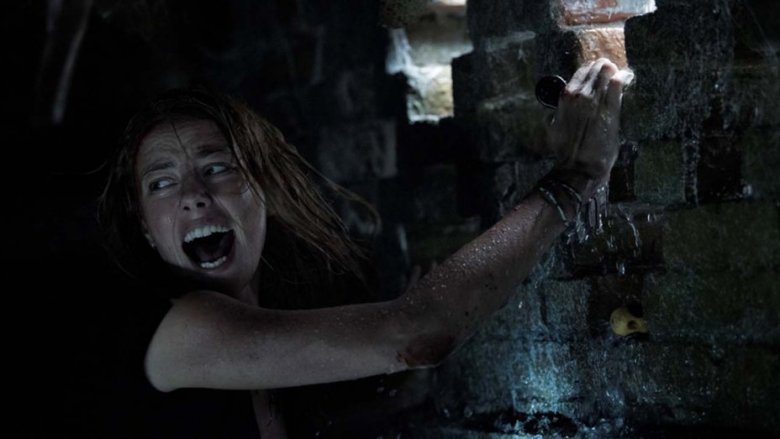 The thrill of a great B-movie is its unapologetic commitment to entertain at all costs. With giant killer alligators converging on a hurricane-stricken home, “Crawl” certainly aims to deliver those goods. Once the first gator bursts into the watery Florida basement where ace swimmer Haley (Kaya Scodelario) has arrived to save her ailing dad Dave (Barry Pepper), “Crawl” becomes a claustrophobic pileup of variations on the same harrowing challenges: Evade those jaws as the flood waters rise.

And so they do. Darting through a tangled mess of pipes and cords, weaving through narrow pipes and gasping for every breath, Haley and Dave anchor a taut, bloody survival story that takes no compelling turns whatsoever. Ace genre director Alexandre Aja simply delivers on expectations without the slightest curveballs. Unlike the zany thrill of his cartoonish anything-goes remake “Piranha 3D,” this aquatic monster movie is strictly by the book.

Still, there’s a certain artfulness to the way “Crawl,” which Aja directed from a script by sibling writers Michael and Sean Rasmussen, establishes its main scenario. Haley’s a competitive swimmer who has dealt with anger and rejection for much of her life, in part due to lingering resentment over her parents’ divorce. When her sister rings to ask her to check on their dad ahead of a looming Category 5 hurricane, she rolls her eyes and works her way into the seaside community, evading police blockades in the process. When she finally gets to Dave and finds him trapped in a small corner and already badly injured, “Crawl” becomes a frantic riff on the father-daughter bonding story. As they breathlessly catch up and talk through the various ways in which this broken family missed its moment, every life-or-death close encounter becomes a microcosm of the uncertainty behind their relationship.

Of course, there’s a scarier real-life threat percolating beneath this rather ludicrous pileup of physical challenges, but don’t expect a hot take. While the very nature of a hurricane movie released in the midst of hurricane season taps into a mounting dread of climate change, while providing an outlet for that fear in pure escapist terms, “Crawl” never endeavors to dig beyond the conundrum established within its first 20 minutes. From there, it’s just an excuse to play around.

As with many movie monsters, the gators are simply thoughtless, growling giants who dart out of the water at the least opportune moments, and give Haley the excuse to flex her swimming muscles under duress. While those gaping maws threaten one helluva bite — one brilliant shot of Haley’s distant face seen between a gator’s jaws says it all — the movie’s two central characters are remarkably resistant to the wide range of wounds they receive over the course of the movie’s 97 minutes, even as other less-fortunate victims are ripped to bloody pieces.

As much as the suspense remains in play, its main threat has a certain robotic quality, and the humorless tone doesn’t help. Aja can’t resist the occasional unapologetic “Jaws” POV shot, but outside of that, “Crawl” sticks with its humans as they keep searching for new ways out — and hit a lot of dead ends. Shifting from green-hued underwater scenes and a shadowy basement cast in streams of light, “Crawl” is essentially a damp haunted house movie, and at its best works as a visual treat just a few notes shy of the wild potential embedded in its material.

Of course, when you reverse-engineer a guilty pleasure, it’s not exactly going to take big swings. Moviegoers who want to watch a killer gator movie will get exactly what they want, and Aja keeps the adrenaline pumping all the way through to a dramatic finale. While the father-daughter dynamic feels like a bit of a routine, the pair’s dwindling options as the water levels rise take on a representational quality that extends beyond dysfunctional families. “Crawl” doesn’t exactly deliver the most elegant metaphor for the rising crisis of the environment, but the simplicity of that message is exactly the point. When the levees break and the waves come crashing in, there’s nothing left to say.

“Crawl” is now in theaters.

This Article is related to: Film and tagged Crawl, Reviews