SXSW winner is a bracingly horrific but resiliently beautiful documentary about a young woman raising her daughter in a Syrian war zone. 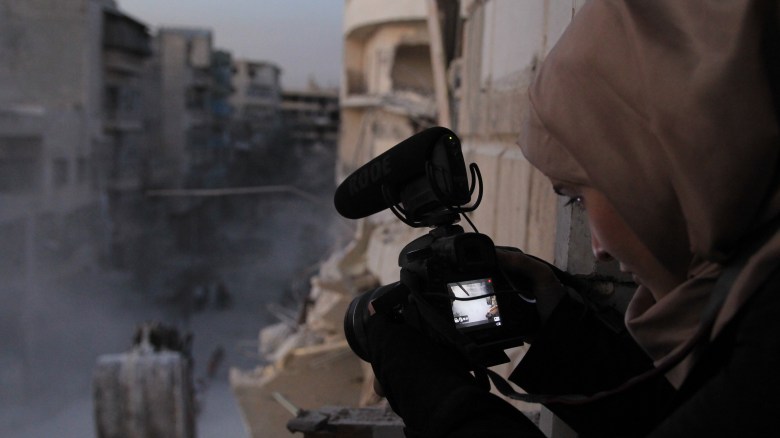 Towards the beginning of Waad al-Kateab and Edward Watts’ “For Sama” — a bracingly horrific yet resiliently beautiful documentary about al-Kateab’s experience as a woman, a patriot, and a mother living in the ruined heart of Aleppo during the ongoing war in Syria — a few medical volunteers are seen messing around in a hospital during a break from the shelling. They’re young and smiling and you would never know what they were living through if not for the blasted concrete on the floor and the wet blood on their clothes. A few years earlier, they were regular university students pursuing regular careers; now, a normal day consists of avoiding bombs and burying friends.

Why don’t they leave? How could they stay? What inspires someone to scrap for the ashes of a country where local jihadists, foreign warplanes, and even their own president are competing to exterminate them? The men find some art supplies amidst the rubble, and start writing thick black letters on each others’ faces. One of them looks into al-Kateab’s camera and spells it out for us with a rebel smile: “It’s beautiful to have the word ‘freedom’ painted across my forehead.”

“For Sama” may not be the first documentary to offer the world a vivid glimpse of the unimaginable suffering of the Syrian people (“Last Men in Aleppo,” “City of Ghosts,” and “Of Fathers and Sons” are just some of the many remarkable pinholes that filmmakers have poked into the cruelest ongoing war of the 21st century), but where its predecessors have often literally salvaged life from the clutches of death, al-Kateab and Watts invert that dynamic.

For all of its abject horror — epitomized by frequent images of dead children, and a heart-scarring birth sequence that feels like the single worst thing ever caught on camera until it’s suddenly redeemed by a miracle — “For Sama” isn’t a nightmare with pockets of joy so much as it’s a collective dream that’s playing out under a cloud of impenetrable darkness.

A conflict of this scale doesn’t take shape overnight (the filmmakers object to the term “civil war” in this case, as it overlooks the atrocities of international forces), and “For Sama” offers a powerful vision of how violence can scald an entire country at the speed of a slow boil. Al-Kateab was a twentysomething marketing student at Aleppo University when the anti-Assad protests first began, and some of her film’s most gripping footage comes from those early days of civil uprising, when her friends were happily galvanized into activists. They take to the streets to demand their freedom, either too brave or insufficiently cynical to imagine that Bashar al-Assad’s regime would sooner raze those streets to the ground than share them with its people.

The spark of revolution always feels the same among young people — it always casts their faces in the same beautiful light — but “For Sama” crystallizes the hope and conviction that brings them together. Al-Kateab’s voiceover grows numbing as the film goes on, and sometimes feels used to elide difficult moments and spare viewers from having to wallow in an ocean of second-hand pain, but her narration also lends the documentary a diaristic intimacy that keeps the story grounded on a human level.

It’s deeply touching to hear her think back on the day when she first met a handsome doctor named Hamza (an encounter precipitated by a terrible bombing), and to see him for the first time as she did, through the lens of her camera. You can feel why she fell in love with him as he puts the carnage out of mind to focus his full energy on the wounded child in front of him; it’s a bravery so natural and complete that it doesn’t even seem like bravery. We see that they both looked like movie stars on their wedding night, and that the music was loud enough to mute the explosions outside.

And then, of course, there’s the scene where Al-Kateab, flushed and in disbelief, records her reflection in the bathroom mirror as she learns that she’s pregnant with her first child. Al-Kateab and Watts don’t need to belabor the circumstances — what amount of context could ever hope to make sense of a mother claiming her son’s corpse from a hospital and carrying his lifeless body through the streets? — and so they focus instead on how people lived through them. How they joke about running to the front lines for safety, sing to their blissfully oblivious kids, and anguish about what might be best for them.

Hamza (whose “Do Not Disturb” t-shirt feels like the darkest of great jokes) chose the revolution over his first marriage, and stayed behind in Aleppo when others begged him to flee. Al-Kateab is wracked with guilt for raising her daughter in the middle of a warzone, but what example would she set if she surrendered her home to tyrants? Al-Kateab’s film is dedicated to her daughter, but “For Sama” highlights how Al-Kateab’s actions are dedicated to the adorable baby girl as well; everything she and Hamza do, especially when it’s dangerous, is for her.

“Places are about their people,” Hamza insists, and even as “For Sama” sinks into an uncertain limbo during its final third — the film becoming temporarily enervated by its own helplessness — this utterly essential documentary never fails to illustrate what he means by that.

“For Sama” is now playing in theaters. It will air on PBS later this year.

This Article is related to: Film and tagged For Sama, Reviews, Syria