Eisenberg remains open to the idea of a new chapter in Mark Zuckerberg's story, and shared his thoughts on the Facebook founder's Congressional testimony. 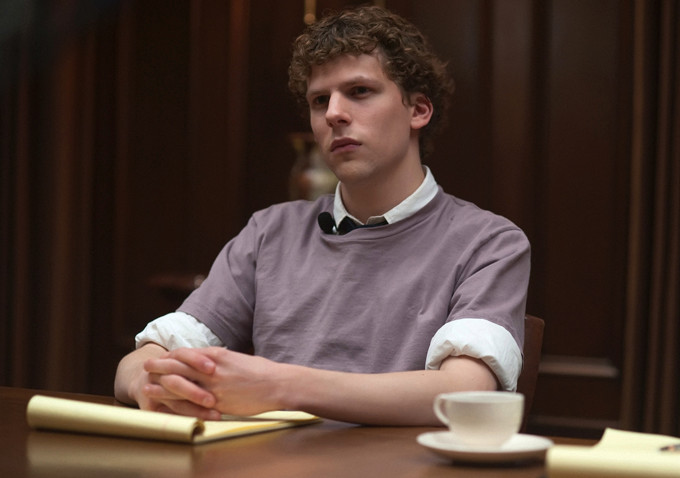 Much has happened in the nine years since the release of “The Social Network,” and earlier this year, Aaron Sorkin expressed interest in making a sequel to the David Fincher-directed saga of Facebook founder Mark Zuckerberg. But star Jesse Eisenberg, who scored an Oscar nomination for playing the fresh-faced entrepreneur, hasn’t received any official updates about the project.

“I’ve only heard about it in interviews this week,” the actor said, during a conversation in New York while promoting his dark comedy “The Art of Self Defense,” now in release. “Because I don’t Google my name, this the only way I hear about my future projects.”

Nevertheless, Eisenberg said he would gladly entertain the offer if it comes his way. “Oh, yeah,” he said. “To play a good role in a popular thing is very rare. This was an opportunity to play a complicated character that you’d normally play onstage or an art film, but on a big scale. For me, that was incredibly fortunate.”

Eisenberg praised Sorkin, whose “Social Network” script won the Oscar for Best Adapted Screenplay, but the actor confessed to ignorance about the many ways in which Facebook — and Zuckerberg’s complicated reputation — have evolved over the past decade. “Sorkin is a genius, and if he chooses to write about something, it’ll obviously be interested,” Eisenberg said. “But I am not aware of either the project, or even the current controversy of the company.”

Sorkin himself has said he has some homework to do if he pursues a “Social Network” sequel. “I know a lot more about Facebook in 2005 than I do in 2018, but I know enough to know that there should be a sequel,” Sorkin told AP Entertainment. “A lot of very interesting, dramatic stuff has happened since the movie ends with settling the lawsuit from the Winklevoss Twins and Eduardo Saverin. … I’ve gotten more than one email from [producer Scott Rudin] with an article attached saying, ‘Isn’t it time for a sequel?’”

While “The Social Network” ended with Zuckerberg settling a $65 million lawsuit, the decade since then has seen more newsworthy Facebook stories, including last year’s Facebook–Cambridge Analytica data scandal, not to mention the broader arguments about the proliferation of fake news on the platform that played a role in the 2016 presidential election. Zuckerberg faced widespread backlash to his testimony before Congress last April, when he faced tough questions about the company’s privacy regulations and other pressing issues.

“I just watched a little bit,” Eisenberg said. “It’s funny, because a lot of friends who are on Facebook, they are increasingly paranoid about their data. But because I’m not on it, I feel less invested in the controversy of them selling data or whatever.”

The actor said he didn’t blame Zuckerberg for looking awkward during the hearings, adding that it had a certain authenticity to it. “You could argue that acting what we would call natural in that situation requires a level of unnaturalness, because the situation is so strange,” he said. “If a person excels in this strange, public forum, you could argue that is the least natural because they have this facade.”

Stay tuned for more from IndieWire’s interview with Zuckerberg this week. “The Art of Self Defense” is currently in limited release.

This Article is related to: Film and tagged Aaron Sorkin, Jessie Eisenberg, The Social Network