Oppenheimer reflects on the impact his docs about the Indonesian genocide had on the country, himself, and “Look of Silence” star Adi Rukan. 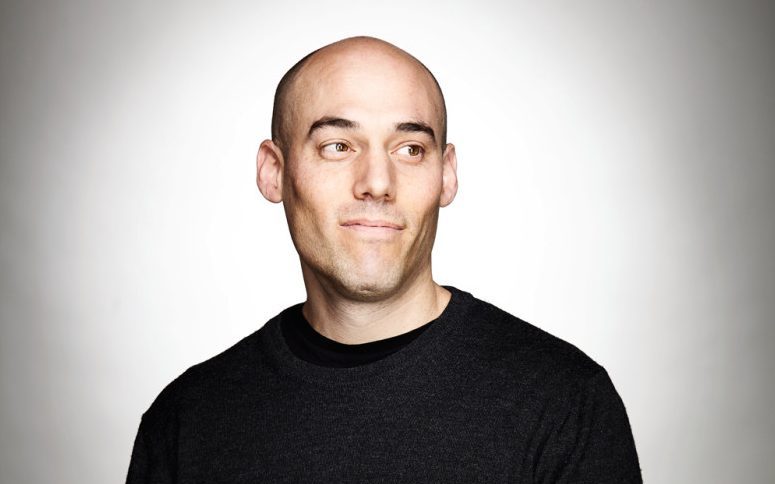 Prior to Joshua Oppenheimer’s “The Act of Killing” (2014) and “The Look of Silence” (2016), the truth behind the 1965-66 Indonesian genocide had been buried in the benign, false history that the perpetrators of the killings elected to perpetuate, and have used to dictate the class and power structures of Indonesia ever since. What’s remarkable about Oppenheimer’s twin documentaries is not just that they exhume this buried history, but that also they use cinema to exorcise the demons that have been left deep within the soul of the country.

On the occasion of the two films being named #4 on IndieWire’s Best of the Decade list, we asked Oppenheimer to reflect on the profound impact his films have had on the politics of Indonesia, on himself as filmmaker, and on the life of his “Look of Silence” star Adi Rukan, who put his family’s safety at risk to speak truth to the powerful men who slaughtered his brother and hundreds of thousands like him.

When we spoke three years ago, these films were still haunting you in a very present way. How much of that trauma still lingers with you today?

My connection to the characters remains vivid and intimate, both in the regular contact we still have after all this time, and also in my heart. I dream of it. I dream of Anwar, I dream of Adi — I speak to Adi and his family a lot. And I’m working on what would seem to be a totally different project, which is a musical, but it’s actually all about guilt and [there’s been a] number of times that I’ve gone back to what I learned making these films, which has something to do with how we can hurt each other in ways where it becomes too painful to change, because change requires facing who you are. There’s a moral warning in the guilt that I explored in Indonesia, which I suppose is what happens when we hurt people in ways that are so bad that we can’t face ourselves afterwards, and we retreat into denial and prevent ourselves from changing. So, I’m thinking about them each and every day.

And also I am kind of constantly arrested by the amount of time I spent making those two films. My inability, if I think I can go deeper, to say, “Okay, that’s enough.” I feel the need to go deeper. So even as I’m preparing new projects, always with the hope that it’ll be faster than those two films, I still feel that I just have this inability not to give whatever time and whatever part of myself is necessary if I see there’s deeper truths to be unearthed and explored.

Do you feel like you are done, as filmmaker, with this specific subject? You had indicated that after 10 years working on these two films about Indonesia you were finished exploring this part of its history.

I think that’s true. You never know what the future brings. I can certainly imagine one day feeling that I can safely return. I still haven’t returned to Indonesia. Everyone there who knows the situation well, and knows what I’ve done and has followed the debates around the films, still says there’s a lingering animosity, from the military especially, and that it wouldn’t be safe for me to return.

That’s something, as time goes on, I do wonder: Maybe I could go back and just see people and be with people, the people who made the films with me and became like family to me, but that moment I just don’t think has come. And if it ever does come, it would be yet another milestone if I were actually able to shoot there again. Would I consider making another film there? I certainly would be open to it, but I’ve moved on and I’ve moved on to other stories, even if the themes remain the same.

The themes — specifically the idea that the stories we tell ourselves are what make us who we are — is something that I think is deeply personal, and it was funny to bring that personal conviction to a film about a country on the other side of the Earth from where I’m from. But as I move onto new work, I’m discovering just how personal the work always was. Those same human dramas resurface elsewhere, and they’re always the stories that I want to tell. I’m exploring human behavior, really.

How are Adi and his family?

Adi and the family are well. After “The Look of Silence” came out in the United States, his family was able to safely move back to the city from which they came and where we made the film, and — with the help of support that came in through the True/False Festival True Life Fund and other support we were able to raise — they were able to open an optician shop, a glasses shop, and get a house in the city where they had been living very much hand-to-mouth when we were making the film. And Adi’s son, who is in the film, is starting university and moving actually into human rights law, which is a choice that moves me tremendously.

So the family is well. Adi’s mom died last year, so that was sad, but the family is well and healthy. Adi, I think, has taken a step back from activism, maybe in relation to moving his family back to the city where he’s especially well known, maybe that was part of the security decision, but he’s never said that. I think he’s just happy to be back with his extended family around and building a new life after the films.

Do you sense the country is in the process of truth and reconciliation in terms addressing its past? And do you have a sense of the role your two films played in starting that process?

I think the films have — and this is the most humbling thing that I’ve ever been part of — but I think the films have helped catalyzed a transformation in how Indonesia talks about its past. That was really true when the films were coming out, but I understand that it’s endured; that there’s an openness in the discussion of the killings, and a newfound understanding. [There are] now resources for younger people to turn to in order to help them understand what is the most important event in modern Indonesian history, which is the 1965-1966 genocide. So I think there is a national reckoning that has occurred around how the events are talked about. A space has opened in which the media can speak openly about the killings in a way they could not before.

But I think there are a lot of people and institutions with real powerful political and economic interests that depend, for their perceived legitimacy, on the continued demonization of the communists. There’s a continued celebration of the killings as something heroic, and I’m speaking specifically of the military and the oligarchs, who have enriched themselves through their patronage relationships with the military, and these institutions won’t give up their wealth and power without a struggle. 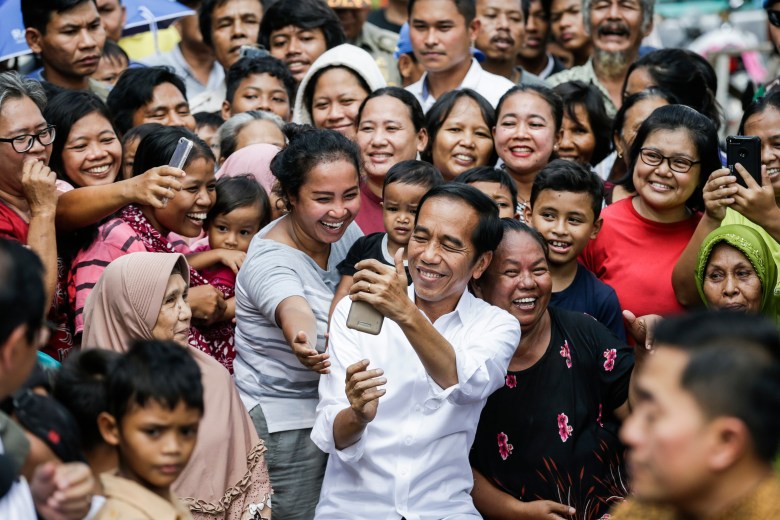 Indonesia’s PresidentJoko Widodo takes a selfie photograph with local residents after his victory speech following the announcement of the election results at a slum area in Jakarta, Indonesia

In 2014, there was the election of Joko Widodo [the first Indonesian president to come from outside the military and traditional elite, and pledged an inquiry into 1965-66 genocide], and he was re-elected this year with a wider margin. In both cases he was up against a totalitarian strong man, retired general, son-in-law of the former dictator who came to power through the genocide, Prabowo. So as the discussion has opened up, there has been predictably a backlash and  propaganda against the survivors of the genocide.

The struggle for justice, the struggle for genuine official truth and reconciliation, then justice, and anything like reparations, will be a long struggle. But what has happened is a lifting of silence. So I think there’s a national reckoning, even if I don’t think there’s been a satisfactory, officially sanctioned truth and reconciliation, let alone justice.

You were excited about the potential of doing a musical last time we talked. Where are you in the process with that?

So we’re moving along [laughs]. We are in development still, but we’re well into the writing process, we have a script we’re all very happy with, but we’re still working on it, and we’re composing songs. I don’t think I can make any big statements of who I’m working with on the music, but it’s exciting and the whole thing is coming together in a thrilling way.

Are there other projects that you are shooting or researching on the nonfiction side?

I have a few projects in development. One of them, that I’m just now thinking through by getting close to this village in Greenland, is dealing with climate change and its impact on one particular community, but really my primary focus is… [pause] I’m juggling a few different things. I’m sorry, I’m being careful because the topics of some of these projects are sensitive, but I’m extremely excited about the musical and it’s probably the one that has the most momentum at this moment.

Click here for all of IndieWire’s Best of the Decade coverage.

This Article is related to: Film and tagged Best of the Decade, Joshua Oppenheimer, The Act of Killing, The Look of Silence