Sometimes a nostalgic reboot gives you the warm fuzzies; other times it gives you a R-rating and a lot of "fucks." 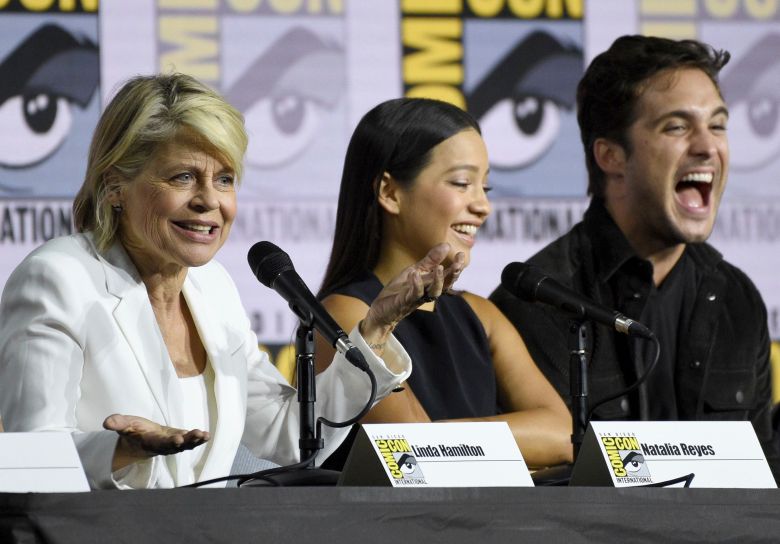 Linda Hamilton is back as Sarah Connor and all is right with the world (and San Diego’s Comic-Con).

Both Hamilton and co-star Arnold Schwarzenegger were present at the SDCC panel for Paramount Pictures and Skydance Media’s “Terminator: Dark Fate,” celebrating their return to the roles that made them action icons.

But before either actor could take the stage, another returning “Terminator” luminary made a special appearance, live from Pandora.

James Cameron sent his regrets to the assembled audience packing Hall H, assuring them that he wished he could join the panel in person, but joking that people are already complaining all the time about how long his “Avatar” sequels were taking to come to fruition.

During his remarks, Cameron detailed how he came back to oversee the project on which he has a story by credit, and serves as executive producer, and how vital it was to him that Schwarzenegger return and that the story focused on unfurling the story of Hamilton’s Connor. The film will also serve as a soft reboot of the series, disregarding the sequels and returning to the narrative as established in the original film and “Terminator 2: Judgement Day.”

Plus, he casually threw in that Edward Furlong would return in “Dark Fate” as John Connor, information that had previously gone unreported.

Once Cameron had concluded, the director Tim Miller (“Deadpool”) came out to speak a little bit about his love of the series and the experience bringing the film to fruition, as well as revealing that the new movie had indeed earned an R-rating. “The DNA of Terminator is an R-rated fucking movie,” Miller said. “To not do it R feels disingenuous to the source material.”

It also had unexpected benefits.

“I got so many takes of Linda saying ‘fuck,’ it’s amazing,” he continued.

After Hamilton was introduced to thunderous applause, she spoke some about her decision to return to the series.

“There was a world of richness that I could explore and then rock it at a certain age,” she said, noting that she trained for a year before filming began. “The richness of my life experience will only enrich the character that I will play,” she continued. “I had to go to places of deepest loss, and that’s what makes Sarah Connor, Sarah Connor.”

As for Schwarzenegger, he had his own reasons for returning, beyond the promise made in his “Terminator” catchphrase, “I’ll be back.”

“Of course I need to come back,” he said. “I’m addicted to ‘Terminator.’ ‘Terminator’ is what really launched my action film career.”

Hamilton also had plenty of praise for her director, calling him “the most honest and true director I’ve ever worked with. He’s just so himself.” She continued, explaining that Miller taught her as an actor that she doesn’t always have to be strong and heavy. That, occasionally, she can be strong and light, further evidence of the director’s ability to seamlessly blend action and comedy.

“He’s dearly beloved by his cast and crew,” she said.

As is Hamilton, as evidenced by the way the rest of the people on stage spoke of her. Natalia Reyes spoke tearily about the importance of both the actress and the character she personified, how she depicted a woman who appealed to so many women for her strength, endurance, her deep maternal dedication, and her general ability to kick ass.

Mackenzie Davis, who plays a ridiculously powerful human hybrid in the new film, also spoke highly of Hamilton, while still maintaining a healthy respect. When asked who would win in a fight between the actresses Davis was quick to respond, “Linda would win. Linda has an inner strength.”

“They can’t beat the Canadian out of a girl,” Davis, a Vancouver native, quipped.

The panel concluded with exclusive new footage from the film, featuring more extended interactions between Hamilton and Schwarzenegger, as well as a thrilling action sequence in which the actress comes loaded for metaphorical mechabear.