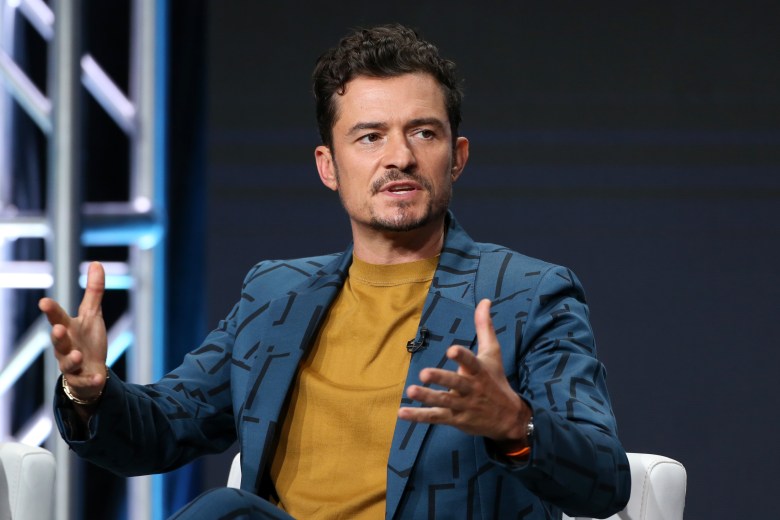 Orlando Bloom, the star of the “Lord of the Rings” and “Pirates of the Caribbean” franchises, has joined the Amazon family to star in the upcoming fantasy series “Carnival Row.” But even though he plays a human on the show, it’s his elfin past that still haunts him.

At the Television Critics Association press tour panel for “Carnival Row” on Saturday, one reporter asked if the actor would consider returning to the “Lord of the Rings” franchise through Amazon’s new series.

“It’s so funny because I remember being on set with Peter [Jackson] is it 20 years ago now?” said Bloom. “He said, ‘Wouldn’t it be fun to think about people doing a remake of “Lord of the Rings?”‘ This was amidst doing this remarkable shot. I said that’s never going to happen.”

Of course, Amazon is indeed tackling the J.R.R. Tolkien property again, but the series will be set sometime during the Second Age, which lasted over 3,000 years. It’s not clear yet exactly when it will take place. “I don’t know how they’re going to approach it,” he said, confirming that Amazon has kept mum on the series’ details.

Bloom has reprised the role of the elven prince Legolas before. After starring in the original trilogy — “The Fellowship of the Ring,” “The Two Towers,” and “The Return of the King” — he was able to play Legolas again in two installments of the prequel, “The Hobbit.”

But it’s not just a matter of throwing on a flaxen-locked wig again. Even though Legolas is among a long-lived race, Bloom has not unlocked those Middle Earth secrets.

“I feel like I’ve done everything [I can.] I like to think of myself as ageless but I don’t know where I’d fit,” he said. If Amazon does want to use the character of Legolas again, Bloom advises them to recast, “probably a 19-year-old kid.”

Meanwhile, Bloom will be playing a human inspector called Rycroft “Philo” Philostrate in “Carnival Row,” a fantasy series set during the Victorian age, when the world of the Fae have fled a terror in their own world to the world of men. He co-stars with Cara Delevingne, who plays the fairy Vignette Stonemoss. Watch a teaser for the series, which has already been picked up for a second season, below:

“Carnival Row” will premiere on Aug. 30 on Amazon Prime Video. The “Lord of the Rings” series still does not have a target release date.

This Article is related to: Television and tagged Amazon, Carnival Row, Lord of the Rings, TCA