Comic-Con: The billion-dollar franchise has finally announced the next step in its box office domination tour, starting next year with the release of “Black Widow.” 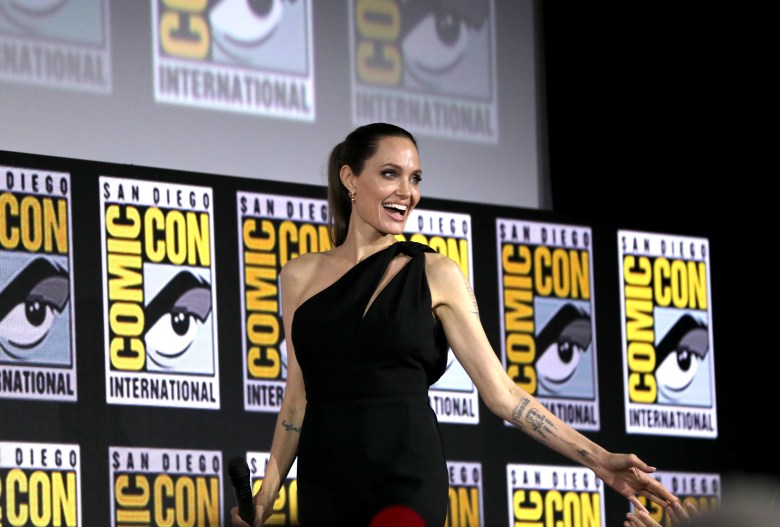 No one puts on a Comic-Con show quite like Marvel, and with other Hollywood heavy-hitters — including Warner Bros., AKA the home of the rival comic book franchise the DC Extended Universe, along with Sony and Universal — opting to sit out the fan-centric confab this year, the billion-dollar blockbuster-maker was in a prime position to dominate the movie news cycle coming out of Hall H.

With the announcement of a batch of new films — the so-called Phase Four of a series that has stretched over a decade and includes 23 features so far — Marvel seems poised to continue its legacy into the foreseeable future. In recent years, Marvel has revealed new films at major events like Comic-Con and its own massive press conferences (in October 2014, Marvel head Kevin Feige announced no less than eight titles at a show-stopping event held in Hollywood), and Saturday evening’s panel joins a long line of info-packed presentations that set the stage for the franchise’s future.

Feige and friends got to kick off the panel — which also included the announcement of a slew of new Disney+ series — in high style, celebrating the news that “Endgame” had just passed “Avatar” as the highest-grossing movie ever. And then it was time to focus on the future, with the announcement of a number of new films — even some surprises! — as the Phase Four calendar filled out before the peeled eyes of Hall H’s thrilled fans.

Marvel and Disney have already staked out a number of future release dates for new MCU movies, including seven locked-in dates that run from 2020 until 2022. Feige has said that the studio actually has enough storylines planned out to take the series though 2028 with a total of 20 films. In 2017, he told Collider, “what happens after [‘Avengers: Endgame’] will be very different. I don’t know if it’s Phase Four, it might be a new thing.”

Despite the lockbox nature of Marvel’s calendar planning, there have been enough persistent rumors — and even some fully-fledged production notices — to keep fans guessing as to what’s coming next. Now, five of those films are official. Here’s what’s next, when they’re coming, and what we know about them so far.

(At the conclusion of the panel, Feige added that the MCU team is also working on “Black Panther 2,” “Guardians of the Galaxy, Vol. 3,” “Captain Marvel 2,” “Fantastic Four,” and “Mutants.” Also on deck: an undated “Blade” reboot, starring Mahershala Ali.)

A “Black Widow” standalone film has been bandied about by Marvel for years, but actual development kicked into high gear when Jac Schaeffer was hired to write the film’s screenplay in January 2018 (a year later, Ned Benson came on board for a re-write). A search for a director soon followed, with names like Amma Asante, Cate Shortland, Maggie Betts, Deniz Gamze Ergüven, Chloé Zhao, and Lucrecia Martel being tossed around, before the studio picked Shortland, known for “Lore” and “Berlin Syndrome,” to helm the picture.

MCU star Scarlett Johansson will of course reprise her role in the film (though recent developments in the MCU indicate this will likely be some sort of prequel story), and recent casting news has revealed a steadily growing slate of talents, including Florence Pugh, Rachel Weisz, David Harbour, and O-T Fagbenle. Filming began earlier this summer.

After “Black Widow,” the MCU’s prospects get wilder and weirder, as Feige’s promise for a “very different” franchise starts to finally take shape. While “The Rider” director Chloé Zhao was at one time rumored to be in the running for “Black Widow,” she ultimately signed on for something a little more offbeat: a big screen take on Jack Kirby’s 1976 creation “The Eternals.”

The “Eternals” storyline has far-reaching implications for the entire franchise, as Kirby’s original characters first emerged millions of years in the past, with a storyline concerning cosmic beings called Celestials whose experiments on humans result in both heroes and villains with supernatural abilities. (And, yes, the Celestials are also to thank for the experiments that led to the creation of superheroes.) As the MCU has edged more into cosmic storylines, from “Guardians of the Galaxy” to “Captain Marvel,” the possibility of an “Eternals” film has persisted, and now it’s finally readying for production.

In the spring of 2018, Matthew and Ryan Firpo were hired to write the film’s screenplay, with Zhao officially coming on board to direct in September of last year. The film will star Angelina Jolie, Kumail Nanjiani, Richard Madden, Salma Hayek, Lauren Ridloff, Brian Tyree Henry, Lia McHugh, and Don Lee.

Recent comic book plotlines could hint at a way for the MCU to incorporate the Eternals into a modern storyline. In a 2006 mini-series written by Neil Gaiman, the Eternals exist in a contemporary setting, but all have forgotten their true identities, and the series followed them as they come to understand both who and what they are, with some shocking conclusions.

Production on the film is set to start this August in Atlanta, putting it just a few months behind “Black Widow.”

For the franchise’s first Asian-led film, the MCU has again reached into the indie filmmaking pool for its helmer: “Short Term 12” breakout Destin Daniel Cretton. The movie will be the first film in the franchise to feature an Asian superhero in the lead role and have a predominantly Asian cast. The project was first announced last December, with reports saying it was top priority for Marvel to find an Asian or Asian-American director for the movie.

The film will star Simu Liu as the title character, and he’ll be joined by Tony Leung (as The Mandarin) and Awkwafina.

“Shang-Chi” is being written by Chinese-American screenwriter Dave Callaham, whose credits include “The Expendables” franchise and the upcoming “Wonder Woman 1984,” which he co-wrote with Patty Jenkins and Geoff Johns. Shang-Chi was introduced in 1971 and is often referred to as the Master of Kung Fu in the comic books. The character has extraordinary martial arts skills and in some comics has the power to create duplicates of himself.

Mere days before Comic-Con kicked off, the next stage of the MCU got a major shot in the arm with the news that “Thor: Ragnarok” director Taika Waititi had signed on to both write and direct a fourth film in the revitalized Thor franchise. While Waititi’s involvement in “Thor 4” is now confirmed, plot details are remaining under wraps for now.

Franchise stars Chris Hemsworth and Tessa Thompson will return for the sequel. And…Natalie Portman, who is not only back for more MCU fun, but will be playing female Thor.

The Multiverse is real! Director Scott Derrickson and star Benedict Cumberbatch will return for the first Strange-centric sequel, complete with a title that makes no bones about the nature of the much-teased Multiverse. Derrickson promised a true horror film, a first for the MCU.

Elizabeth Olsen’s Scarlet Witch will also appear in the film, as the events of the new series “WandaVision” will “directly effect” the new feature.

You can read more about other in-the-works Marvel properties right here, along with details on a slew of projects reportedly in development but not yet announced at today’s star-studded panel.

This Article is related to: Film and tagged Marvel, Marvel Cinematic Universe