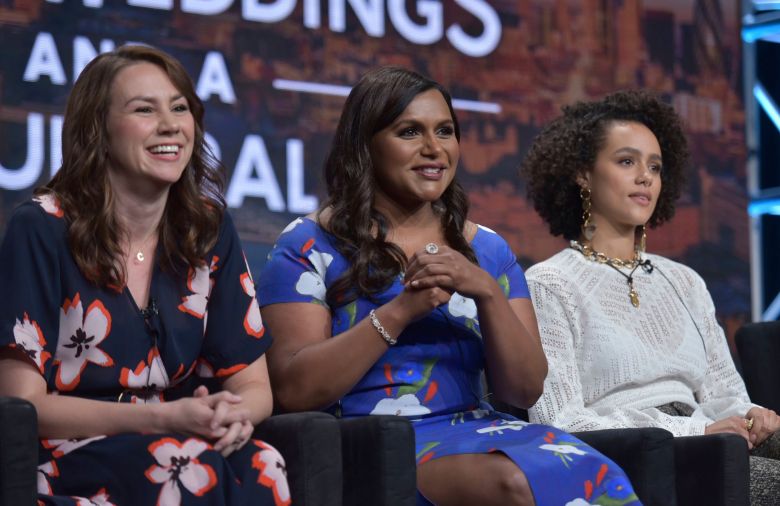 [Editor’s note: The following contains spoilers for the first seven episodes of Hulu’s “Four Weddings and a Funeral.”]

Rom-coms are dead, so they say. (And say.) The time-honored genre now threatens to become a never-ending obituary, but Mindy Kaling saw it differently: By subverting the cliches, she could turn Richard Curtis’ classic “Four Weddings and a Funeral” into a fresh and unexpected Hulu series.

Some things are familiar: Kash (Nikesh Patel) walks from the altar and finds himself at a crossroads. His father (playing the “can you not try, for your dying father, before he dies!” card) encourages him to explore an arranged marriage through the family’s mosque. So far, so prosaic: an arranged-marriage storyline, played for laughs.

However, these laughs don’t stem from a sense of “other-ing” the characters, a leering mean-spiritedness that can mar rom-coms. (Looking at you, “Love Actually.”) Kash’s burgeoning relationship is earnest, and organic — a key distinction for the trope-allergic young audiences whom streaming services attract.

Beyond the business motivations of adapting familiar IP, diversifying its cast and their storylines is a clever and strategic creative move. “At first, in talking to these guys about it, we didn’t think there was that much more to say [than the film] because it’s so perfect,” Kaling said at the TCA summer press tour last week. “And then when [film rights-holder] MGM approached me about it, I was thinking, well, what would make it worth it would be to show a love story through a lens that I would like to see: a love story, which is an African-American woman and a British-Pakistani man falling in love.”

According to a PwC study released earlier this year, intentional content targeting — owning a niche, and pushing specific content toward those interested — is essential when it comes to attracting viewers who are overwhelmed by choices in the era of Peak TV. For younger and more diverse cord-cutters that subscribe to Hulu, that could include classic retellings that emphasize traditionally marginalized casts and plotlines.

Kaling and fellow executive producers Matt Warburton and Tracey Wigfield made sure the writers’ room had wide-ranging experience: drama writers and comedy writers, as well as women and men from a number of ethnic and national backgrounds. That kind of authenticity attracted both Patel and Nathalie Emmanuel, who plays his would-be beloved.

“I basically heard the two words ‘Mindy Kaling’ and I was like, ‘I’m listening!’” Emmanuel said in an interview with IndieWire. “The female characters are written so well. Generally in rom-coms, the women are very likable, not very troublesome, the dream girl in the male gaze. And these women are very complex. They make mistakes.”

“It’s a celebration of inclusivity in a way that’s quietly groundbreaking,” Patel added. “It’s taken this long for [Emmanuel and I] to be the leads in a romantic comedy. A South Asian protagonist is generally shown as completely desexualized.”

Kaling’s vision for the show can — and should — serve as an inspiration to other creators in these times of nostalgia-obsessed content production. Yes, there’s the potential for a built-in bottom line on familiar intellectual property, but the storytelling can still match the modern times.

“The fact that these characters do not seem to have these racial boundaries —  that I think we, as show creators, often see in other shows — was really refreshing,” Kaling said. “I want to keep doing that. I really love that.”

The first four episodes of “Four Weddings and a Funeral” are available on Hulu today; the subsequent six episodes will be released every Wednesday.

This Article is related to: Television and tagged Four Weddings and a Funeral, Hulu, Mindy Kaling, Nathalie Emmanuel