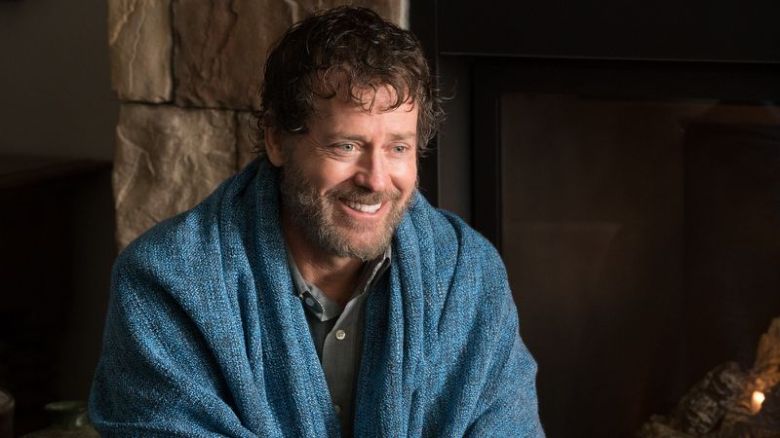 Greg Kinnear is a likeable actor who gravitates towards playing feckless and unlikeable people — the kind of simpering people whose lives are just waiting to be flattened by a steamroller, or already have. The only difference with “Phil,” his cloying and contrived directorial debut, is that Kinnear is both in front of the camera and behind the wheel; it’s like a slow-motion hit-and-run where the victim and the suspect are somehow the same man. As a feat of masochism, “Phil” is an impressive trick. As a movie, it’s a ghastly mess.

It’s immediately apparent why Kinnear was drawn to Stephen Mazur’s (“Liar Liar”) script, which hinges on a humdinger of a mistaken-identity premise that feels like it was hatched sometime in the mid-’90s. The first time that we meet Phil, a morose Portland dentist who Kinnear plays with his signature quiver and sigh, he’s standing on the edge of a highway bridge and staring down at the black water below. A car full of giggling teens pulls up with their iPhones at the ready, and one of them encourages Phil to jump: “I can make you famous on YouTube!” Whatever sympathy and affection our hero is looking for, he’s not going to find it through suicide.

As with most of Kinnear’s characters, sympathy and affection is all that Phil really wants (or feels entitled to). “Our lives are supposed to be full and free,” the middle-aged divorcee laments to his brother (Jay Duplass), “but they’re actually just cold.” We’re supposed to believe that Phil is a pretty smart guy — not a genius or an underachiever, but he has a dental license and watches “Jeopardy!” every night — but that’s hard to swallow when he blames his misbegotten suicide attempt on a nearly fatal misunderstanding of the lyrics to Lynn Anderson’s “Rose Garden.”

Then again, Phil lives in a world where just about everyone is a little bit stupid. Even Michael Fisk (Bradley Whitford), a talkative new patient who appears to have it all, misinterprets Socrates as the stuff of a Nike slogan. “The unexamined life is not worth living,” Michael tells the dentist, encouraging Phil to live his life to the fullest. Phil is awed. Awed, and convinced that people like Michael — shiny types who are stable and still married and live in the kind of suburban palace that comes with its own gates — have discovered the secret to happiness.

Determined to find out what it is, Phil stalks Michael for the day, following him from a wine store to the woods where Michael hangs himself. Now Phil is haunted by a new obsession: What could inspire a man who had everything to throw it all away? At the mercy of some dangerously strained movie logic, Phil decides there has to be a logical reason for it. Michael may have decided that his life wasn’t worth living, but Phil becomes determined to examine it all the same.

Like virtually every other film that’s ever been made about a dentist, “Phil” is pitched as a dark comedy with teeth; it isn’t afraid of poking at some unpleasant truths and drawing a little blood in the process. Even in the year of our lord 2019, screenwriters just can’t resist the droll sadism of a salutary drill to the face. It’s as if the very idea of a dentist’s office is absurd enough to offer a taste of Terry Gilliam’s “Brazil,” and perhaps even skew the way that people look at the rest of the world around them.

That might explain Kinnear’s reliance on Rolfe Kent’s cock-eyed and overbearing score, which tells the audience not to take all of this “suicide” stuff too seriously, and cues us for laughs that never come (the funniest thing about this movie is that it was originally titled “The Philosophy of Phil,” and no one bothered to change the opening title card). That also might explain why Mazur felt emboldened to embrace a sketchy conceit that couldn’t possibly sustain a feature-length runtime without commercial breaks.

You see, Phil doesn’t just start poking around Michael’s life (or the parts of it he left behind), he inserts himself into it. Michael had mentioned an old Greek friend named Spiros, and so when Alicia, Michael’s widow (a chronically underused Emily Mortimer), discovers the dentist sleeping on her late husband’s grave, Spiros is who Phil pretends to be — complete with a bad accent and a peasant outfit that looks about as authentic as a gyro from Arby’s.

The next thing you know, Phil is basically living in Alicia’s house, refurbishing her bathroom, and using all of his spare time to try and solve the mystery of Michael’s suicide. He even builds one of those string boards in his apartment, like a detective trying to pin down a serial killer. One lie begets another, all sorts of obstacles are thrown in Phil’s way (Robert Forster pops up in a one-scene role as Michael’s dad, who spent some time with the real Spiros 20 years ago), and eventually Phil is forced to fake his way through a traditional dance when he takes Alicia to a Greek restaurant for dinner. It’s never a good sign when the biggest scene in a movie feels like a C-plot on an episode of “The Big Bang Theory.”

Kinnear’s unremarkable direction is a natural fit for the film’s sitcom plotting, though it helps that he’s played some version of this character a dozen times before, and knows to give himself the close-ups required for maximum cringiness. “Phil” only gets more painful when it focuses on the search that drives its situation, as its hard-luck hero — despite having been alive on this planet for more than five decades — slowly arrives at the idea that people can’t be distilled to a single detail; they’re not computers that can be unlocked with a password and a lucky guess. Only for a two-dimensional character like Phil could that self-evident truth feel like a genuine revelation.

The movie resolves with a degree of grace and humanity that eludes its first two acts, but at that point there’s precious little use for it. There’s more to life than everything, Phil learns, but Kinnear’s numbing debut has no idea what it might be.

“Phil” is now playing in theaters and on VOD.