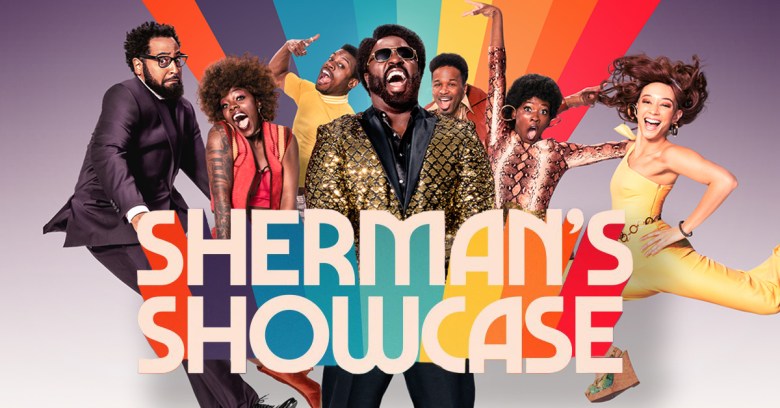 In the tradition and style of IFC’s sublime “Documentary Now!” parody series, the bizarre allure of “Sherman’s Showcase” is that it’s a spoof that takes itself seriously. The IFC series from Diallo Riddle and Bashir Salahuddin is sneering in tone, wringing out the absurdities to be found in classic shows like “Soul Train” and “Solid Gold,” even as it goes to great lengths to imitate their style. Satirizing a format the creators clearly love, the series is so obviously a passion project – a fanboy costume party that celebrates a legendary, even if fictional, TV program’s history.

A variety show in the purest sense of the word, “Sherman’s Showcase” is structured as a series of infomercials – running from a few seconds to several minutes in length – for a 23-disc DVD compilation of a 40-year-old music variety show, hosted by Salahuddin’s egotistical and maybe even slightly shady Sherman McDaniel. Featured are cutting musical send-ups; on-the-nose period costume design; hilarious impressions (Bresha Webb as Mary J. Blige is a highlight); fake commercials for real products like VHS cassettes: “Watch movies in your own house for just 200 dollars a tape!” the announcer says; real trailers for fake movies, and much more.

Tonight’s series premiere is hosted by a dapper John Legend, who gets to show off his comedic chops, delivering classic infomercial-style narrator parlance. He introduces the audience to the fictional “Sherman’s Showcase,” describing it as unlike anything on TV that aired during its time – that is, except for several other shows. Cut to a rapidly scrolling list of those shows (some amusingly specifying seasons, or sequences), including: “Solid Gold,” “Soul Train,” “Don Kirshner’s Rock Concert,” “MTV’s The Grind with Eric Nies,” “Seinfeld (Season 5),” and “True Detective (the last 10 minutes of that one episode),” to name a few.

Paraphrasing Dave Chappelle, every musician wants to be funny, and every comedian would like to be able to sing or play an instrument. And Legend, who also exec produces the show via his Get Lifted production company, is just one of many musicians who get to be as funny as they want to be playing a disparate group of nutty characters while a comedian like Tawny Newsome gets to impersonate Diana Ross in a “Soul Train”-inspired segment.

But what co-creators Riddle and Salahuddin, who appear in most of the sketches, have done is smarter than mere imitation. They have created something that not only parodies news that never happened, but also the styles in which the shows it parodies were structured and filmed. And more importantly, for the duo, it’s less about absolutely nailing the technicals, and more about overstating what already exists in their source material. To be sure, they are respectful of the objects of their satire, and are shrewd about what can be sourced for comedy that would work in the present-day.

If it all feels unbound and chaotic – for example, Tiffany Haddish eating soup in one very short sequence; Quincy Jones performing stand-up comedy in another; and a trailer for a fictional film titled “Black People Were Right: The Movie” – it’s very intentional. An absurd, heightened world that will be difficult to box in, this is Diallo and Salahuddin’s vision, unfiltered.

A critique of “Sherman’s Showcase” could be that it risks being too nichey; that it’s all inside jokes which younger audiences might not immediately get. But there’s more than enough basic, free-wheeling humor that even the uninitiated will laugh plenty, or will at least come to appreciate its artistry.

So, yes, the series will certainly be funnier for audiences who are at least vaguely familiar with the shows that inspired it. But to some degree, IFC itself is a hipper-than-thou, niche network that refers to its target audience as “Responsible Rebels” who are more likely to aggressively seek out what they want. And it is here that Riddle and Salahuddin, after over a grinding decade in the business, have finally found a comfortable perch where they are allowed to take risks like never before even if each attempt isn’t always a slam dunk.

Unconventional and sometimes tasteless, it’s one series that audiences will want to return to repeatedly in order to completely appreciate its many dimensions and intricacies that may not be immediately obvious on first viewing. But “Sherman’s Showcase” is above all – and most importantly – just plain funny.

The show marks the second new series created by Riddle and Salahuddin premiering this month. The other is the equally hilarious, half-hour scripted comedy “South Side,” which debuted on Comedy Central on Wednesday, July 24.

“Showcase” premieres on Wednesday, July 31 at 10/9c, on IFC, with back-to-back episodes.