Corporations are the ultimate villain in a dark, gritty, male-centric superhero story that paints a world run amok by greed and its creations. 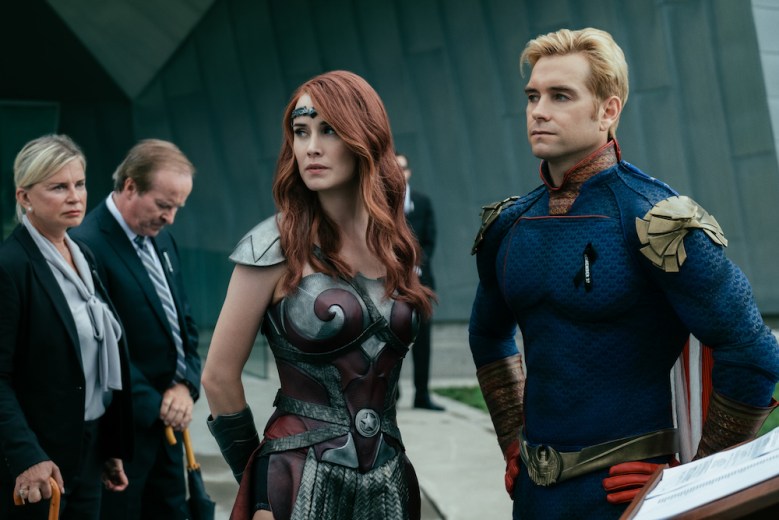 Dominique McElligott and Antony Starr in “The Boys”

[Editor’s Note: The following review contains spoilers for “The Boys” Season 1, including the ending.]

Like a kitten clinging to the top branch of a tall tree, “The Boys” is always on the edge of disaster. The dark and violent Amazon series teeters between vicious cultural commentary and over-indulgent naïveté. Thus is the peril of making a show that relies on familiar tropes long enough to upend them, just as often as it leans on tough-guy posturing to entertain. But even though the first season will make you feel icky enough to drop out entirely, Eric Kripke’s eight-episode adaptation of Garth Ennis and Darick Robertson’s comic book proves itself savvy enough in Season 1 to earn all that cringing. Someone or something swoops in to save the day, and one decision in particular ensures the kitten won’t have to give up any of its nine lives just yet, but we’ll get to that in a second.

First off, there’s a lot about “The Boys” that’s familiar, most of it purposefully so. When first introduced, the show’s superheroes are doing everything you’d expect: They’re saving kids, stopping bank robberies, and taking selfies with fervent fans. But once out of the public eye, these heroes are anything but heroic. They frequent private clubs where cell-phone bans give them the freedom to act however they want, which involves an incredible-shrinking-man sizing-down and long-jumping into a woman’s vagina, and skybound supers having very public sex among the rafters, as only they can.

It turns out in this world, being a superhero is just a job like any other. On the clock, you’ve got to follow a code of conduct. But left to your own devices, the temptation to abuse ones gifts prove too tempting. More than that, some heroes are more than willing to let people die if it means protecting their public image — or their company’s. Vought, a multi-billion dollar conglomerate, manages a squadron of heroes, licensing out their services to the highest bidding cities just as often as they sell their likeness for merchandising deals. The superhero game isn’t a game anymore — it’s a business, and business is booming.

Now, superheroes with mixed-to-negative intentions — like Vought’s Justice League-adjacent supergroup The Seven — have been chronicled in everything from “Hancock” to “Deadpool” to “Watchmen.” Man-boy protagonists (like Jack Quaid’s Hughie) who find their inner-heroism through superheroes is a tried-and-true origin story, meant to make nerdy readers (or viewers) feel all the more attached to the Average Joe called to action. And the hyper-violent effects of anyone with super-strength are always gruesome, but less surprising after hard-R adaptations like “Blade” and “Dredd.”

The latter’s eponymous gravely voiced frontman inflicts plenty of violence in “The Boys,” despite lacking superpowers. Karl Urban glares and growls his way through the tortured role of Billy Butcher, and it’s here where the show’s most nagging issues comes up. When we meet Billy, he’s pretending to be an FBI Agent in order to get Hughie to help him out. He wants to plant a bug in The Seven’s headquarters, and Hughie’s been invited to visit. 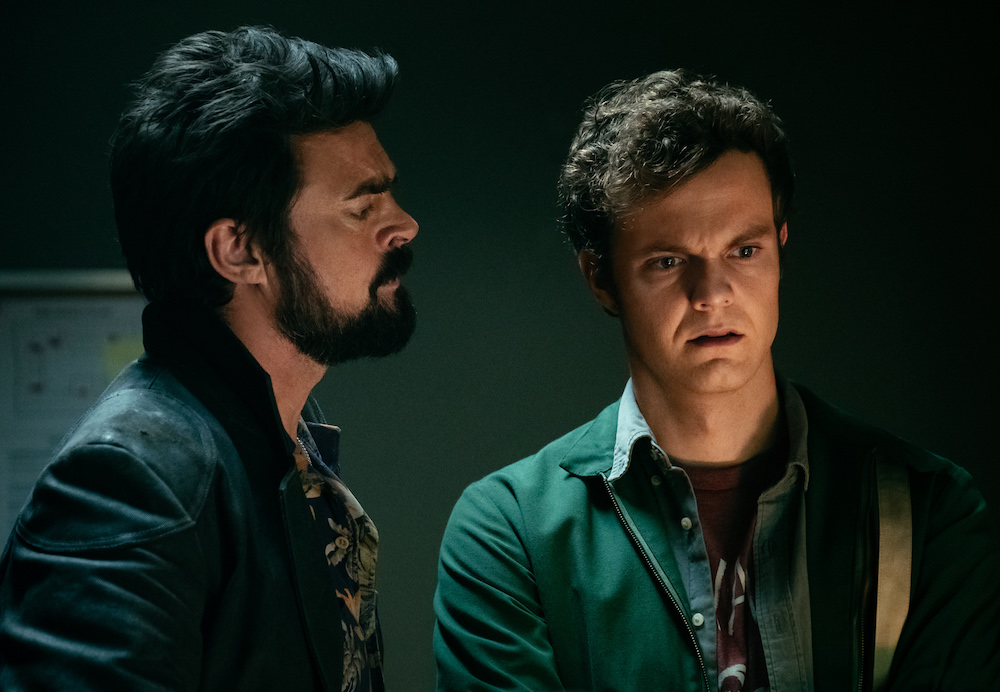 Karl Urban and Jack Quaid in “The Boys”

Only Billy isn’t an FBI Agent. He’s a vigilante — or, as he calls himself, an “independent contractor” — hellbent on exposing the superheroes for what they are: corrupt corporate products who are as happy to let you die as they are to save you, depending on the exposure. Though it takes a few episodes to find out why, the answer is as disgusting as any of the violent acts: Homelander (Antony Starr), the leader of The Seven and a Superman/Captain America stand-in, raped Billy’s wife, Becca (Shantel VanSanten). That’s why Billy has become a bearded kamikaze pilot with one simple mission: Destroy the supers, just as a super destroyed him.

And he’s not alone. “The Boys” makes a habit of victimizing women in order to give men purpose. Season 1 opens with Hughie taking a romantic post-work walk with his girlfriend, Robin (Jess Salgueiro), only to see it end with A-Train (Jessie T. Usher) speeding by so fast he obliterates Robin, leaving nothing but a slo-motion pool of blood splattering Hughie’s face and her severed hands still holding his. When A-Train goes on television to apologize, he says he was in pursuit of a criminal and Robin was in the middle of the street — a lie only Hughie can confirm, and one that sends him into a partnership with Billy and his “boys” — Mother’s Milk (Laz Alonso) and Frenchie (Tomer Capon), two friends who get suckered into helping out.

Now, there’s nothing the show can do to better round-out Robin, especially given how quickly Hughie enters into a new romance with The Seven’s most recent addition, Starlight (Erin Moriarty), aka Annie. (Any kind of flashback to remind us of Robin’s prominence in Hughie’s life would’ve undercut the audience rooting for him to get together with Annie.) But in the final seconds of Season 1, Becca is given a real shot at development, and “The Boys” gets a stay of execution for one more year.

After exploring a bit more of Homelander’s backstory, we come to learn Becca was impregnated with a super-baby after she was raped, and, at first, told the baby died during childbirth along with Becca. But after Homelander notices discrepancies between two accounts of that day — from the lead doctor and Vought president Madeline Stillwell (Elisabeth Shue) — he discovers that his son is alive, along with Becca. After killing Madeline for lying to him, he takes Billy to his wife’s secret home, drops him on her front lawn, and walks up to greet Becca and her son. 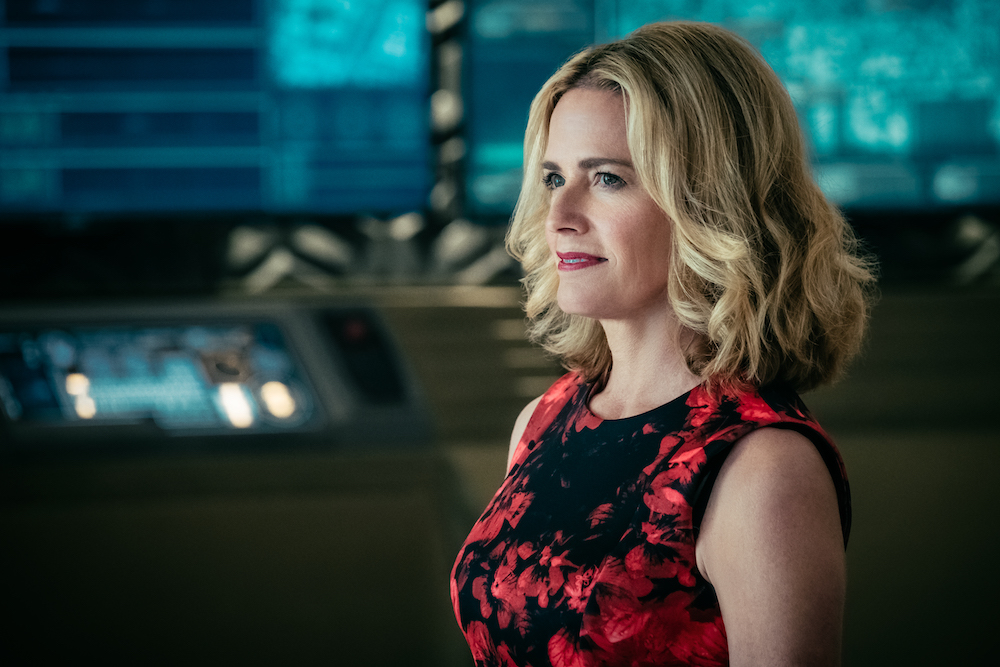 Elisabeth Shue in “The Boys”

This is… an extreme ending to be sure, but one that promises further development for Becca’s character in Season 2 (which is already in production). For one, the fact that she’s alive and her status had to be kept secret at least partly excuses any further attention to her this season. (The writers don’t want to tip their hand, after all.) More importantly, we can actually hear from Becca herself, get to know Becca, and understand the victim’s point-of-view instead of her one-note vengeful husband. While overdue and far from guaranteed, this could help make both characters more compelling, and help “The Boys” overcome its boy-centric POV.

All that being said — and I know it was a lot, I’m so sorry — the above framing is a tad dismissive. “The Boys” is very boyish, yes, but it’s also a biting condemnation of a corporatized America. The reveal that these superheroes weren’t born with powers, but made in a lab to be powerful is another important twist. What was an overstep by Vought in trying to capitalize off of a miracle is now a malicious “Dr. Frankenstein and Frankenstein’s monster” scenario. It’s not just that Madeline and Vought don’t care what damage the superheroes do so long as they’re profitable; it’s that they raised them to be cold, heartless machines that will follow orders simply because they see the corporation as their parent. (It also explains Homelander’s weird obsession with Madeline’s breast pump and baby — he’s got a severe mommy complex, and he’s jealous.)

That kind of thinking is dangerous, as evidenced by fanboys suckling on the Marvel and DC teet, never daring to question their favorite’s decisions and lashing out at anyone who disagrees. It will be curious to see how many viewers of “The Boys” see their heroes onscreen, in both the tights and the business suits, considering how clearly they’re invited to draw parallels. The performances add to that invitation, landing on just the right side of self-aware as each of the false heroes turns the charm on and off with impressive command — Starr, Moriarty, and Shue bring extra dimensions to their characters, too, making “The Boys” all that much more fun (you know, when it’s not very, very dark).

Still, it is nagging to see a show so devoted to criticizing the delusional nature of superhero culture also ignore one of its more persistent sins: diminishing women to props (not to mention using rape as a motivating tool for someone else). It’s great to see Annie save Hughie in the end. It’s great to see Annie get her own backstory, her own agenda, and loads of her own screen-time — even if she does become the romantic fixture of our manboy protagonist. Given the top-notch special effects and sharp writing at the core of “The Boys,” there are still loads of potential within this well-realized universe. Let’s just hope this ending really did save the cat.

“The Boys” Season 1 is now streaming on Amazon. Season 2 has already been renewed, and Aya Cash will be joining the cast.

This Article is related to: Television and tagged Amazon, The Boys, TV Reviews