The Latinx List is a curated list of promising screenplays written by Latinx writers that explore the Latinx experience. 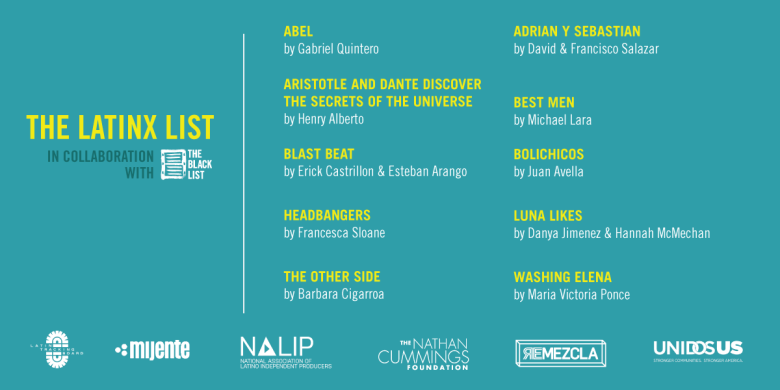 Latino audiences have the highest moviegoing rate in the US, but make up only a 5.2% share of all film roles, and The Black List — the annual survey of Hollywood executives’ favorite unproduced screenplays — wants to do something about that.

The Black List has partnered with The Latin Tracking Board, Mijente, NALIP, The Nathan Cummings Foundation, Remezcla, and UnidosUS to launch The Latinx List, a curated list of promising screenplays written by Latinx writers that explore the Latinx experience.

The Latinx List will include the same caliber of screenwriting that The Black List has become known for, telling the kinds of stories that all participating organizations would like to see onscreen.

“The last two years have cast many of the consequences of a movie industry that doesn’t look like the country or the world into sharp relief,” said Franklin Leonard, founder of The Black List. “The scripts on the Latinx List are remarkable opportunities to tell great stories and do good business in the process. I look forward to seeing them on-screen.”

Marisa Franco of Mijente, a political home for multi-racial Latinx and Chicanx people, added: “As Latinx people, we know there are many ways where some of us and parts of all of us are overlooked, excluded and pushed out of our country’s historical, cultural, and artistic narratives. We were eager and honored to participate in building the Latinx List as a way to advocate for our communities’ stories.”

Scripts on The Latinx List were sourced via blcklst.com, or came as nominations from the participating organizations. Selected scripts were written by at least one Latinx writer, and feature a Latinx or Latin American character in a prominent role.

Ranging from coming-of-age dramas, to stories tackling immigration, friendship, love and loss, the 10 scripts that make up the inaugural Latinx List (along with their loglines) follow:

– “Abel” by Gabriel Quintero: Abel, a young, undocumented immigrant who resorts to prostitution to make ends meet, perpetuates a series of lies after falling for Francisco, a first- generation Mexican-American who seems to have it all.

– “Aristotle and Dante Discover the Secrets of the Universe” by Henry Alberto: Based on the book by Benjamin Alire Sáenz, set in 1987 El Paso, follows two teenage Mexican-American loners as they explore their friendship and the difficult road to self-discovery.

– “Best Men” by Michael Lara: Lifelong friends, Javier and Ryan, are reunited to celebrate Ryan’s wedding, but when an unexpected visitor from their past brings an unpleasant surprise, Ryan’s illegitimate son, they find themselves forced to go to ridiculous lengths to contain this scandal and save the ceremony.

– “Blast Beat” by Erick Castrillon & Esteban Arango: “Blast Beat” is an irreverent coming of age drama set in the Y2K about Carly, a Colombian metalhead genius, and his deviant rival younger brother, Mateo, who struggle to fit into their new lives after moving to suburban America. But when their undefined status in the broken immigration system threatens to split their family apart, they must make a choice that will change them forever.

– “Bolichicos” by Juan Avella: In 2006 Venezuela—at the beginning of the country’s collapse—a privileged and greedy 20-year-old recruits the maid’s strait-laced son to carry out a currency exchange scam that swindles millions of dollars out of the country’s poorest citizens, but inadvertently ends up turning brother against brother. Inspired by true events.

– “Headbangers” by Francesca Sloane: 1997, Philly. This is the story of racist Ethan: a punk, teenage skinhead that is forced to move into an all Black and Chicano neighborhood, parenting his kid sister with his estranged boozer grandma. While falling in love for the first time: with a young woman, with rap music and with the role of being a big brother, Ethan makes an irreversible mistake that changes everything.

– “Luna Likes” by Danya Jimenez & Hannah McMechan: When Anthony Bourdain dies, his biggest fan, a melodramatic Mexicana teen, decides it is her destiny to become the next great culinary/travel documentarian extraordinaire! (Her words, not ours.) Only issue is, she and her family are undocumented and they see her rise to fame as a dangerous career choice.

– “The Other Side” by Barbara Cigarroa: Set in Brownsville, Texas, during the child migration crisis, Lucy, a low-income Mexican American teen, is confronted with her own need for escape when her father decides to sponsor two undocumented minors for money.

– “Adrian Y Sebastian” by David & Francisco Salazar: Facing immigration issues in the US, a couple must confront the fears of rejection or risk losing each other.