Venice's programming head defended the lack of women directors in this year's lineup, but there's a big flaw to his logic. 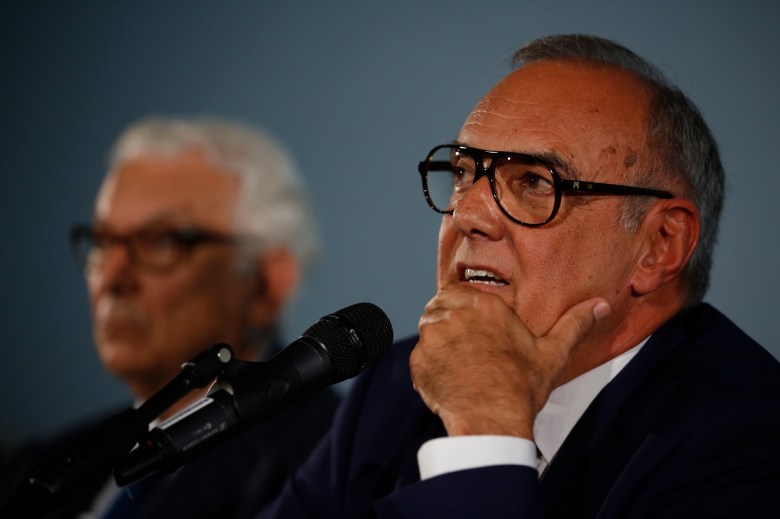 Same festival, different year. While this year’s Venice Film Festival includes a marked uptick in competition films directed by women, that’s only the case because last year’s numbers were so dismal: 2019 will host two competition titles directed by women, up from just one title last year. And while artistic director Alberto Barbera was eager to trot out excuses like “not enough women make movies,” he also landed on another reason why this year remains dominated by male filmmakers: Now they make movies about women, too.

At a press conference held this morning to unveil the year’s slate, Variety reports that Barbera told the assembled press, “Women directors are unfortunately still a minority. But these portraits of women, even when they are directed by men, reveal a new sensibility geared towards the feminine universe, as had rarely happened in the past. This is a signal that perhaps the polemics of recent years have made an impact in our sensibility and our culture.”

Barbera went on to cite films in the lineup “dedicated to the female condition,” naming examples like “Ema” from Chile’s Pablo Larrain (termed “one of many portraits of females in the lineup”) and the documentary “Woman” from Yann Arthus-Bertrand and Anastasia Mikova, which will screen out of competition.

While it’s great that male filmmakers are tackling these subjects, Barbera’s logic in singling out these titles is suspect: It implies that women only make movies about women, and other movies about women make up for the deficit. If men are making movies about women, who needs women making those same movies? Why even bother programming films by women if men are just as capable and interested in stories about whatever the “feminine universe” is?

The films from the two women in Venice competition have a lot of potential. This year, Haifaa Al-Mansour’s “The Candidate” and Shannon Murphy’s “Babyteeth” will vie for the Golden Lion at this year’s festival. In 2018, only Jennifer Kent broke through the gender divide in the Venice competition section, premiering her visceral “The Nightingale” at the festival. (Her first reward: a credentialed film critic called her a sexist slur during the film’s first press screening; at the conclusion of the festival, the film still won Special Jury Prize and the Marcello Mastroianni award for best young actor for Baykali Ganambarr.)

In recent years, Venice has continually fallen short when it comes to women-directed films, averaging just one in a field of 18 to 22 selections over the past six years. It wasn’t always this way: In 2012, 2011, 2009, the festival hosted four competition titles from women, but their representation has seriously dipped.

At Cannes, four women-directed films competed for the Palme d’Or at Cannes in May, and seven for the Golden Bear at Berlin in February. Earlier this week, TIFF announced its first slate of films for this year’s festival, which is packed with picks from female filmmakers (over 44 percent in Galas only, with more to come). These include Marjane Satrapi, Marielle Heller, Semi Chellas, Chinonye Chukwu, Kasi Lemmons, ​Lorene Scafaria, and Alma Har’el. All of those festivals were able to find films directed by women that embraced a wide range of stories that were not bound by gender concerns. But not Venice.

Last year, the festival signed the 5050×2020 “gender parity pledge” that a number of other festivals — including Cannes — have also embraced. While the pledge does not directly require parity in programming, it does call for other systemic changes that could help alleviate gender-based blindspots. Those include a push for parity on executive boards, compiling statistics on the gender of the filmmakers and key crew members for all films submitted to the festival, and increasing selection transparency by making the names of selection committee members public.

While Venice has not officially released the pledge-related numbers, Barbera did tell Variety that, among the festival’s submissions, “women directors accounted for less than 24 percent.” He added: “What I’m never going to do is take a movie directed by a woman just to raise the proportion.”

The Venice Film Festival takes place August 28 to September 7 and marks the official kickoff of the 2019 fall awards season. Check out the full lineup for the 2019 Venice Film Festival right here. This year’s competition jury is led by Lucrecia Martel, a female filmmaker who makes all kinds of movies about all kinds of people. But putting a woman in charge of a competition section doesn’t make up for the lack of women who could be competing in it.