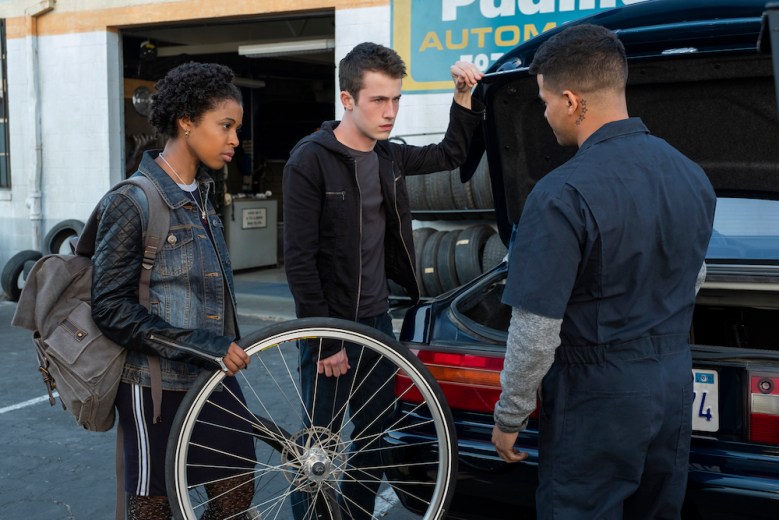 Grace Saif and Dylan Minnette in “13 Reasons Why”

[Editor’s Note: The following review contains spoilers for “13 Reasons Why” Season 3, including the ending.]

By focusing on rehabbing the image of a rapist, “13 Reasons Why” Season 3 quickly proves it’s creatively bankrupt. But only after watching all 13 hours of the new season do you learn that even the rehab was for naught, which makes the whole season one big confounding waste of time.

…and yet, the show’s perceived popularity indicates people are watching, so let’s talk about some of the many ways this season fails. Brian Yorkey’s still-very-bad Netflix original has nothing substantial to say; despite the many controversial topics touched upon, these 13 new episodes are only interested in depicting trauma for the sake of drama, and no one seems to care how far they have to re-e-e-e-ach to justify talking about abuse, rape, murder, immigration, homophobia, “locker room talk,” drug use, and so many more intense, real-world teen experiences. The sheer quantity is preposterous, undercutting any actual impact the season could carry, but the central focus on humanizing a rapist is beyond reason.

With it, Season 3 also exposes a nasty ideology. For as confounding as some plot points can be, these teens live by a code of selective nihilism. Nothing matters to them outside of each other, and the only reason this group carries significance is because of an indefinable “goodness” within each of them. They think they deserve to live better lives than they’re living, but there’s no expectation that they will. The world’s inherent injustice is crushing everything outside their protected little bubble, so the best they can hope for is to be left alone. (If only the viewing public would grant them that wish.)

Of course, these kids aren’t good. They’re actually pretty awful, objectively speaking, but the show clearly believes they’re decent kids caught up in lots and lots of bad situations. So to better examine what makes these kids different than everyone else, “13 Reasons Why” rather clumsily asks an age-old question: Are people capable of change? The ballsy part comes with who’s being asked to change: Bryce Walker (Justin Prentice), a serial rapist and one-dimensional antagonist from past seasons.

Why, oh why, should “13 Reasons Why” devote an entire season to humanizing a rapist? That’s a great question, and a good answer is never provided. Realistically, it’s because the show must go on, and Yorkey made another troubling decision under pressure to produce more content. Perhaps, at first, it seemed like a good idea to murder Bryce, and maybe building a mystery around who killed him could’ve been a viable framework elsewhere. But any satisfaction in eliminating the antagonist to kick off a new season disappears when he keeps resurfacing via flashback. The whole third season becomes The Bryce Walker Show, and, again, he doesn’t earn it. 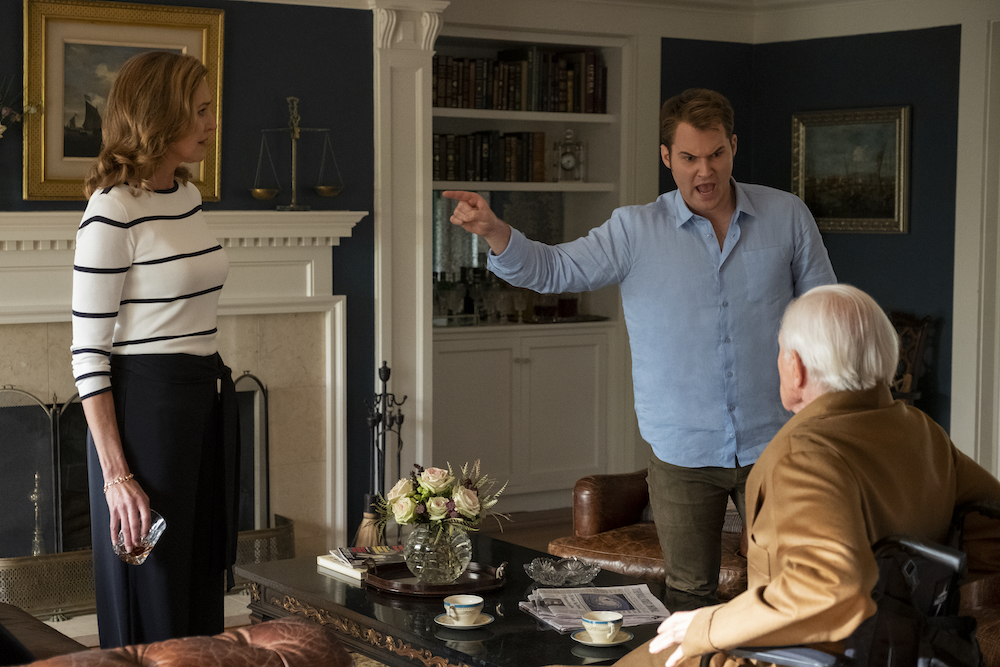 Brenda Strong and Justin Prentice in “13 Reasons Why”

In a nutshell, Season 3 is a murder mystery. The O.G. protagonist, Clay Jensen (Dylan Minnette), is arrested for killing Bryce, and his friends — led by Ani (Grace Saif), a new character, narrator, and ingénue — have to figure out what really happened so they can prove Clay’s innocence. Setting aside whether anyone would actually be that driven to save a mopey, obsessive, and overbearing kid like Clay, “13 Reasons Why” is primarily focused on reframing viewers’ perspectives on Bryce. At times, it wants you to think all kids deserve the benefit of the doubt; that they’re capable of change; that forgiveness for even the most vile deeds is possible when the offender is working to better himself.

But at other times, and very much so at the end, Yorkey’s show treats its kids like adults; like their roles are already set in stone; like they’re bound to repeat the same offenses no matter what they personally do to improve, whether it’s because of their own evil nature or societal corruption.

“13 Reasons Why” has always struggled with nuanced discussions of right and wrong, let alone teen suicide and school shooters, and making the decision to put Bryce front-and-center exhibits the same kind of unearned confidence a high school jock with rich parents might have himself. It’s also the first sign maybe this show isn’t equipped to judge the defining aspects of a person’s life, as seen through the eyes of mopey, oblivious, and inexperienced teens.

Many more signs follow, like when Bryce starts having sex with Ani, claims to be in love with her, and goes on an apology tour to everyone he’s ever hurt. Intermittently, Bryce will do something violent — tear up his room, grab Ani a little too hard, or fall back on past, threatening behavior — but for the most part, Yorkey’s writing team goes above and beyond to show viewers another side of Bryce: the side Ani claims to see and the side Clay claims doesn’t exist.

This boring, self-serving exercise suffers from the same oblivious outlook The New York Times was criticized for when it ran that deer-in-the-headlights Nazi profile — treating Bryce’s backstory like his basic humanity is a revelation. “Rapists are people, too? With feelings and hobbies and stuff?” Yeah, we know. Everyone knows. But this is a fictional character in a fictional show who did something seriously awful and there’s no need for us to feel sorry for him — not when the season’s final point is that all of Bryce’s attempts to change were for naught.

To say “13 Reasons Why” Season 3 suffers the same ugly fate as Bryce Walker — beaten, broken, possibly shot, definitely drowned, and very, very dead — isn’t entirely accurate. Netflix has already ordered Season 4, after all. But its ending is an absolute trainwreck of mixed messages and unfinished ideas. 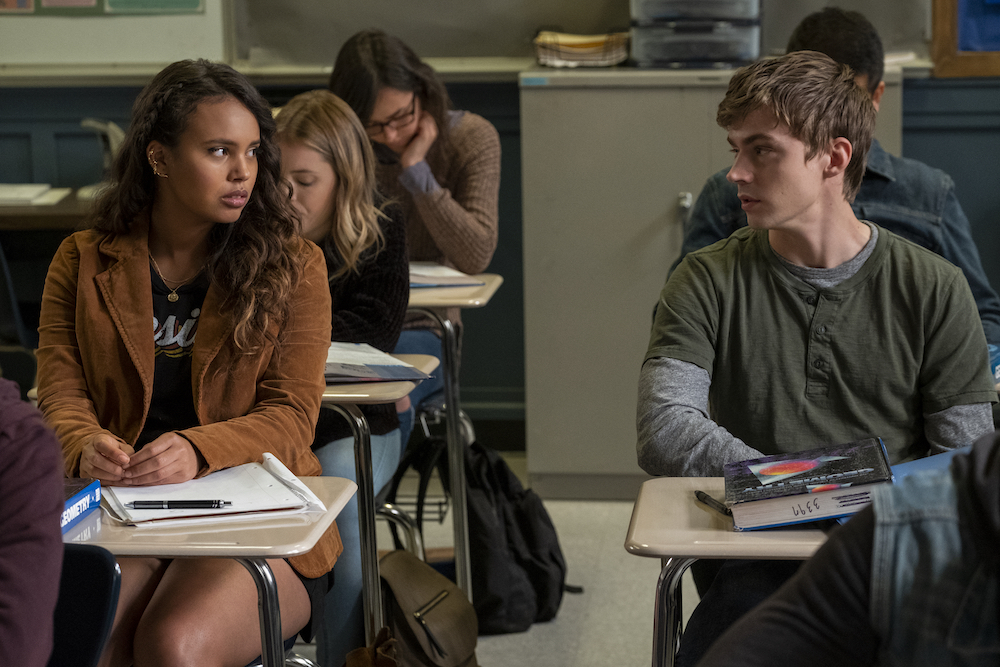 Alisha Boe and Miles Heizer in “13 Reasons Why”

The Ending Means… What, Exactly?

After bouncing between the past (shown in bright, sunshine-y colors, as if everything was just dandy before Bryce’s death) and the present (which pairs a desaturated black-and-white aesthetic with a matted widescreen frame for that super-serious film look), “13 Reasons Why” lets its untrustworthy narrator Ani tell the cops what the group wants them to believe, while the audience sees what really happened. So while she explains why Bryce’s brokenhearted best friend Monty (Timothy Granaderos) killed him, we instead see Alex and Jessica show up to help a badly hurt Bryce get some help.

But when Bryce, irate from the pain of two broken legs, swears vengeance on Zach (who beat him up), Alex realizes this guy will never change — he’s just going to keep hurting people, no matter what. So Alex shoves him into the water, and Bryce drowns.

This is where Season 3 started — with Bryce dead — and to find out why he died and who killed him, we had to… sympathize with him? Why? Why do we need to see all sides of a rapist if the argument is the first thing we think of (that he’s a rapist) is also his defining principle? In defending Alex’s choice to kill Bryce and exonerating him in the eyes of the law, his friends, and the show’s audience, “13 Reasons Why” is saying Bryce wasn’t capable of change and didn’t deserve to live… right after spending 13 hours showing him go through the effort to change? What?! Seriously — what? That makes no sense, nor did it make for a fun season, nor did it tell us anything about the human condition. If anything, the season marks a regression for humanity — that’s how badly it mishandles its themes.

And yet in doing so, Season 3 affirms a dangerous outlook from teen-centric stories. What makes Bryce’s death OK isn’t a decision by the courts, the cops, or even an adult. It’s the kids who decide what’s good and evil. Throughout “13 Reasons Why,” Clay and his gang of not-so-merry hooligans are suspicious of authority and unchecked by their parents. They cite Bryce’s not guilty verdict during last year’s rape trial as evidence that the judicial system is “fucked”; the cops are equally as “fucked” given how inept their investigation gets; their parents are either checked out (Clay’s mom and dad spend more screen-time worried about flower placement within their home than they do their son’s impending arrest) or part of the problem — at least four parents are physically, verbally, or sexually abusive to their kids — and teachers at school are just as likely to ignore them or assault them, which leaves Clay’s friend circle isolated in a closed-loop.

High schoolers can often feel lonely or cutoff from the rest of the world, but “13 Reasons Why” isn’t painting a world of subjective impressions. There’s actual evidence to support these teens’ feelings of abandonment. It’s why the teens lie so often — they have to, in order to get around their governing bodies — and it’s ultimately why Clay & Co. feel pretty good about how things turn out. It’s OK that they lied to the police, to their parents, and to everyone else because they decided those people are bad, and they are good. It’s OK they framed an innocent teenager because they decided he was bad and they are good. It’s OK that Alex killed Bryce because they decided Bryce is bad and Alex is good.

That the show itself offers up plenty of evidence to the contrary is only part of the problem. It also encourages further loneliness, isolation, and dangerous behavior by telling teens whatever keeps you out of trouble is also the right thing to do.

Before Clay is arrested, he’s actually given two full episodes of backstory to explain his suspicious behavior. In order to keep the audience guessing, Yorkey doesn’t confirm Clay is innocent. Instead, he has Clay berate anyone who questions Clay’s innocence. He gets in a huge fight with his mom, his friends, and his love interest, Ani, because they dared to take a beat and think about whether the kid who held Bryce at gunpoint and said, “I’m going to fucking kill you” might actually fucking kill Bryce.

In the end, the only thing separating the killers from the rapists is the subjective insistence that one is better than the other. “Don’t believe Clay could be a killer, don’t even think it. He’s a good guy, and good people don’t kill people… except when they do, and then it’s OK.”

If “13 Reasons Why” wasn’t such a well-viewed show, we could ignore it as just another bad piece of television. But people are connecting with it; enough people, at least, to earn a Season 4 renewal before Season 3 even dropped. Hopefully, the new episodes make clear that these kids don’t mirror real people or their problems; they’re not even real characters. They’re stand-ins who exist only to push plot and create melodrama. That’s not a reflection of any kind of reality, and neither is “13 Reasons Why.”

“13 Reasons Why” Seasons 1 – 3 are streaming now on Netflix. The series has already been renewed for a fourth and final season.

This Article is related to: Television and tagged 13 Reasons Why, Netflix, TV Reviews