The story of a teenager who passes for trans may not be above reproach, but its good intentions are infectious. 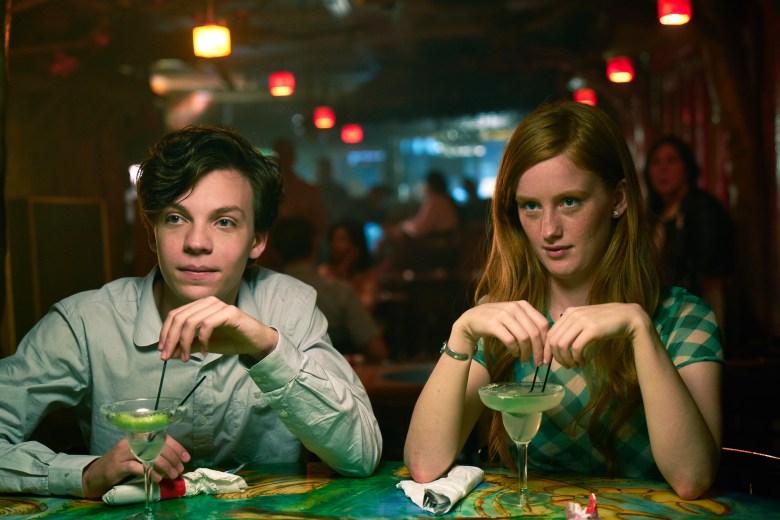 In “Adam,” a teenager pretends to be trans, and his journey provides a bittersweet gateway to the young man’s sexual awakening. Naturally that arc leads to a whole lot of questions, some of which the movie controls better than others. Some have argued that the very premise of “Adam” yields troubling transphobic implications, going so far as to launch a boycott of the movie well in advance of its release, and those allegations deserve serious attention. But the abject dismissal of the movie on the basis of its premise alone negates the actual mechanics of a narrative that hovers inside a cis male gaze, and charts a path toward its redemption.

“Adam” certainly stimulates a complex dialogue about the biases of its anti-hero and his twisted act of deception. But the thorny representational issue surrounding “Adam” belie its sweet, amiable tone, and there’s much to be appreciated about the way this progressive comedy wraps astute observations on sexual dynamics in a familiar genre context; it has the bones of a gender studies curriculum and the skin of a romcom, which makes it an agreeable Trojan Horse even when it stumbles.

Adapted from Ariel Schrag’s 2014 novel, “Adam” finds high-schooler Adam Freeman (played with dopey charm by Nicholas Alexander) shrugging off his stodgy parents’ summer vacation in Lake Tahoe to go hang with his hip college-aged sister Casey (a feisty and fun Margaret Qualley, a world apart from her “Once Upon a Time in Hollywood” turn). Openly gay at school but still closeted to her parents, Casey runs with a sexually liberated queer crowd in New York, which means little to Adam aside from an excuse to party with older kids.

However, with his soft features and short hair, Adam quickly realizes that gay women think he’s trans. At first, that freaks him out, and then it leads to his central conflict: When he meets the the gentle Gillian (Bobbi Salvor Menuez) at a gay party, he’s so enamored of her that he allows her misperception to linger.

Adam’s ability to pass for trans — not only in a few ephemeral circumstances, but over the course of a serious summer fling — strains credibility, but it’s enough to animate the larger ideas in play. The premise allows director Rhys Ernst to delve into the creative challenges of what this unique lie actually entails. The typical expository montage finds Adam googling “I think I’m a trans man,” digging through YouTube testimonials, and even reading Jack Halberstam’s “Female Masculinity” in his unusual path to enlightenment. And while the movie reduces this educational process to a punchline, that itself mimics Adam’s own naivete about what he’s actually getting himself into.

Adam’s story takes such prominence here that much about his sister’s world has a kind of half-hearted quality — the dorm room chatter and college protests over gender identity and gay marriage have the stilted quality of a Wikipedia cut-and-paste. Gillian herself has a woefully underwritten quality; the character is just a few degrees shy of manic-pixie-dream girl stature for the way she bats her eyes at Adam’s every move. But the movie excels at centering on the conundrum facing its confused protagonist.

Ernst’s directorial debut (he previously directed an episode of “Transparent”) follows this scenario entirely from Adam’s perspective, and his cis-gaze becomes an intriguing vessel for cinematic exploration. When he accompanies Gillian to an S&M competition party for women only, the camera lingers on his face as a bouncer looks him over and assesses his gender. Later, he’s tasked with sorting out the logistics of using a strap-on. The movie frames these sequences in severe cringe-comedy terms, as if angling for a next-gen “American Pie,” and it almost gets there.

It’s fascinating to watch such outré material portrayed in such ebullient terms – especially when the very real threats that trans people face on a daily basis linger just outside his awareness. “Adam” doesn’t inhabit its character’s simplicity so much as it observes how it informs his actions. When a violent twist arrives as a jarring reminder of the discrimination trans people face each day, it forces Adam to reckon with his exploitation in a whole new light, and while the device is a bit contrived, it clicks in the context of a movie that hews closely to formula.

“Adam” is a period piece set in 2006, as everything from glimpses of George W. Bush on television to posters for “Old Joy” at Film Forum serve to remind. That provides a curious window into simpler times. Text messaging had yet to supplant phone calls; social media wasn’t quite the centerpiece of every young person’s life. Some of the movie’s conversations sound too modern for the era (the word “cisgender” itself seems a bit too widely understood), but “Adam” does capture a moment in which outrage culture had yet to be reduced to hashtags, and young people learning about the world actually had to engage in frank conversations about it. (Imagine!)

Adam eventually befriends Casey’s trans-masculine roommate Ethan (Leo Sheng), and while their interactions surrounding Adam’s romantic endeavors serve as an all-too-convenient plot device, they give the character a mature voice of reason to help him understand the young adult world he’s stumbled into.

None of that helps overcome the draggy third act (which has been dramatically altered from the book). While Adam grapples with whether he’s able to confess the truth to Gillian, and how, the eventual solution comes and goes with a shrug. The movie is so overly sensitive about its scenario that it arrives at a tidy resolution at odds with the circumstances leading up to it. Rather than approaching the subversive coming-of-age romanticism of “Call Me By Your Name,” Ernst softens the drama so that Adam can learn his lesson, become a better person, and somehow avoid causing any lasting damage to everyone around him.

The tidiness of that outcome positions “Adam” as fantasy about the potential of his enlightenment; the truth for many people struggling to comprehend the expansive categories of gender and sexual identity is far messier. However, there’s a sincerity to the way Adam’s trajectory holds the potential to educate him — and that quest extends to the movie as a whole. “Adam” may not be above reproach, but its good intentions are infectious.

Wolfe Releasing opens “Adam” today at the IFC Center in New York and the Laemmle Music Hall on Friday, August 23.