The action epic "Baahubali 2: The Conclusion" is also streaming on Netflix now in various languages. 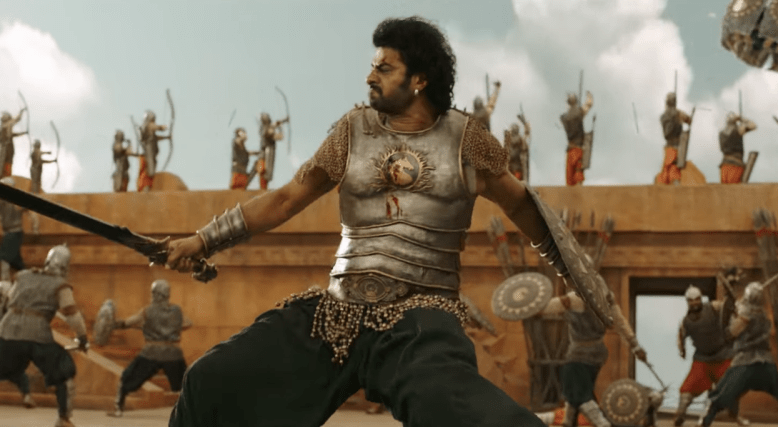 Anyone on Twitter over the last two days might have seen a clip from one of the biggest blockbusters ever released in India without knowing it (via Decider). An extremely bonkers one minute clip from the Indian action epic “Baahubali 2: The Conclusion” has earned over one million views and counting since surfacing August 5 on Twitter. The scene originally went out as a 17-second clip, the video for which is also nearing one million views.

The “Baahubali 2: The Conclusion” scene that’s gone viral is the kind of bonkers and cartoonish action beat that would feel right at home in a “Fast and Furious” movie. A group of male soldiers are catapulted into the air from a bending tree and thrown toward an enemy’s kingdom. The soldiers come together in midair and band together in a circle, uniting their defense weapons to become a flying human shield. No description can possibly do the visuals justice, so it’s worth it to watch the clips below.

“Baahubali 2: The Conclusion,” directed by S. S. Rajamouli, opened in 2017 and was the sequel to the 2015 epic “Baahubali: The Beginning.” Both films were shot at the same time and became some of the biggest releases in the country’s history. “Baahubali 2” was such a massive hit that it became the first Indian movie to gross 1,000 crore (10 billion rupees, roughly $141 million) and did so in just 10 days. The sequel became the highest grossing film in India of all time in six days with 8 billion crore. The movie ultimately ended its run in India with the equivalent of $218 million in the U.S. As far as Indian films worldwide, “Baahubali 2” trails only “Dangal.” The worldwide gross for the movie came in at an equivalent of $278 million in the U.S.

Moviegoers who like what they see in the viral clip are in luck (and anyone who loved “Hobbs & Shaw” should definitely love what they see), as “Baahubali 2: The Conclusion” is now streaming on Netflix in both Hindi and Tamil versions. Netflix has been curating a strong section of contemporary Bollywood movies, including the first “Baahubali” movie and the blockbuster “Dangal.” English-language versions of “Baahubali” are also available to stream.

Get a bonkers taste of “Baahubali 2: The Conclusion” in the videos below.

I mean WHAT THE HELL Bollywood pic.twitter.com/IqZ8AGUb2h

The full scene with sound is just the greatest scene I’ve ever watched pic.twitter.com/LWOZeC6Svb

This Article is related to: Film and tagged Baahubali 2, Netflix