A fun, clever, and wholly unexpected animated movie about the making of Luis Buñuel's "Land Without Bread." 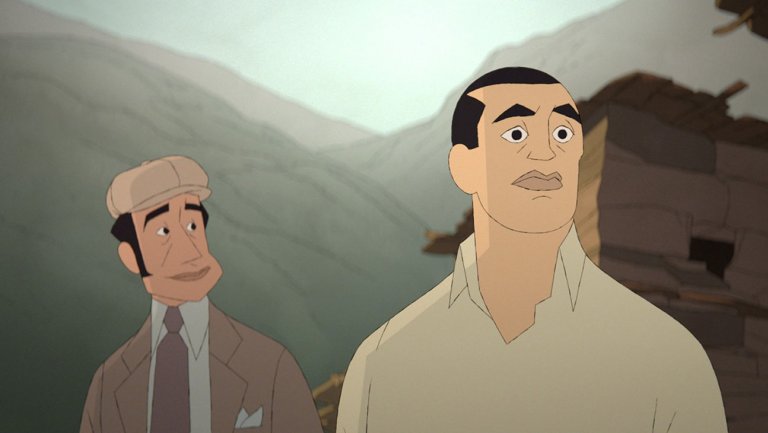 “Buñuel in the Labyrinth of Turtles”

It’s a truth so universally acknowledged that it seldom bears repeating: America sees animation as a genre, while the rest of the world recognizes it as an art form unto itself. Here, it’s just for kids, and most of the movies that Hollywood makes with it are about ice princesses or angry birds or plastic sporks gripped by existential crises. Beyond our borders, however, animation can be for anyone, and tell stories about anything. One look at something from Studio Ghibli or Cartoon Saloon is enough to appreciate how much we lose by treating “cartoons” as a lesser form of cinema that chiefly exists to placate young children; a massive animation department wasting its talents on the likes of “Wonder Park” is like someone buying a Ferrari just to drive around a golf course.

But, every once in a while, a foreign director makes a work of feature-length animation so far beyond the bounds of what American viewers have been conditioned to expect from such things that it can’t help but add insult to injury. Enter: Salvador Simó’s “Buñuel in the Labyrinth of the Turtles,” an animated film about the making of “Las Hurdes (Land Without Bread),” Luis Buñuel’s scathing 1933 satire of the era’s naïve ethnographic documentaries.

Leveraging one of Buñuel’s least famous (but most pivotal) works into a warm story of artistic maturation — albeit one that’s shadowed by the Franco regime and the specter of death — Simó uses animation to smear the line between dreams and reality; to bridge the gap between the precociousness of Buñuel’s surrealism and the power of his social critiques. For all of its heady ideas, some of which it explores to greater effect than others, “Buñuel in the Labyrinth of the Turtles” is most striking for how it illustrates that animation isn’t a mere subcategory of cinema. That movies have always been a unique medium for how they see reality and unreality as two overlapping roads towards the same truth.

We’re introduced to Buñuel in a Paris café on the day before “L’Age d’Or” is set to scandalize Western society. Voiced by Jorge Usón, whose raw and unforced delivery sets the tone for a movie in which all of the characters speak with the weight of real people, this Buñuel is a man as crude and hard as the style in which he’s drawn. While the other intellectuals at his table insist that coups are the only way to transform the world, Buñuel is convinced that art has the potential to be an even more powerful tool. Indeed, he’s so compelled by his power to change the way people think that he sometimes forgets to think about the people whose ways he’s hoping to change. He’s more interested in his ego than in his effect; when a fan asks how to differentiate Buñuel’s images from those of his “Un Chien Andalou” collaborator Salvador Dalí, Buñuel snaps: “There’s a very simple way to differentiate my images from Dalí’s: They’re all mine!”

As a provocateur, Buñuel is basically peerless. As an artist — and perhaps as a human being — he still has some ways to go. His next destination: Las Hurdes, one of the poorest areas in all of Spain. Buñuel wants to go there to effectively use the local people as living props in a film about the poverty close to home; a film that would violate documentary reality in ways both subtle and extreme in order to underscore the bitterness of a land without bread, while also mocking other filmmakers for fetishizing the hardships in far-off lands as people were starving to death in their own countries.

But Simó and co-writer Eligio R. Montero suggest that no one was more humbled by “Las Hurdes” than Buñuel, himself. Adapted from a graphic novel by Fermín Solís, their screenplay weighs the humanity of Buñuel’s later work against the confrontational transgressiveness of his first movies, and imagines how the process of making this 27-minute short may have taught the legendary auteur how to strengthen his anarchic tendencies by attaching them to an ethical spine. It’s a development that this movie only manages (or even bothers) to dramatize in fragments, but it’s fun to think of “Labyrinth of Turtles” as a left-field critique of Buñuel’s largely unassailable first masterpieces. 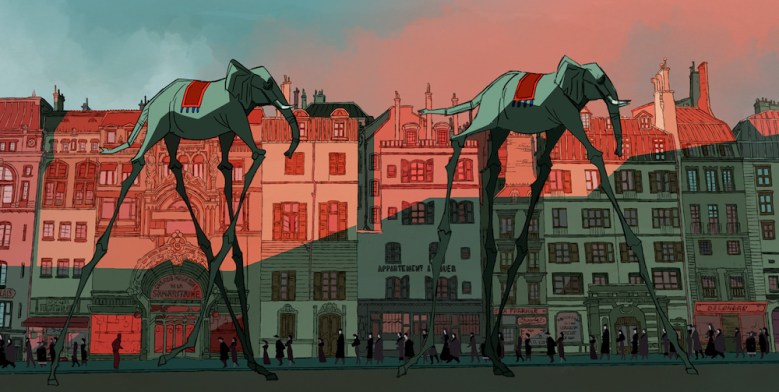 “Buñuel in the Labyrinth of the Turtles”

Nevertheless, this movie is more rewarding as a light human drama than it is as any kind of hard-nosed treatise on the particulars of Buñuel’s artistic pathology. The core of the story isn’t even Buñuel himself so much as his friendship with activist Ramón Acin (Fernando Ramos), a hapless and idealistic family man who agrees to fund “Las Hurdes” if he wins the lottery. In an appropriately surreal twist, that’s exactly what happens next (a true fact in a movie that tends to distort the making of “Las Hurdes” as much as “Las Hurdes” itself distorted the people of Las Hurdes). Buñuel is pure id and danger and willing to do anything to get the movie out of his mind. Acin, by contrast, is more level-headed and in touch with the suffering that he’s eager to exploit. While “Labyrinth of Turtles” is guilty of eliding this basic interpersonal conflict in favor of an “edutational” feel, it’s hard to complain about the spotlight it shines on Acin and “Las Hurdes.”

It also helps that the characters are so well-drawn, if only figuratively. The animation itself is unremarkable. It can look cheap and stilted, as the humans are composed of hard lines that clash against the anime-bright backgrounds, while the architecture of Las Hurdes seems rotoscoped in a way that makes it all look both real and imagined. But therein lies the method to this apparent mediocrity: “Labyrinth of Turtles” is designed to occupy the unsteady landscape between the borderlessness of Buñuel’s imagination and the inflexible facts of life in Las Hurdes, a place where the houses are filled with shit and young children starve to death in the streets.

One moment the movie spirals off into flashbacks and surreal visions of giant elephants walking through the town square. The next, it returns to the grim reality of the situation at hand. The aesthetic makes these two modes feel like different shades of the same color; things for Buñuel to blend, and not just choose between. At several junctures, Simó even cuts from the animated making-of “Las Hurdes” to live-action footage from the actual film in a way that somehow makes Buñuel’s movie feel more invented and more genuine at the same time (Arturo Cardelús’ lush and beautiful score helps smoothe over the seams). “Buñuel in the Labyrinth of Turtles” may be too sketchy and openly sentimental to merit comparison to its namesake, but it’s tempting to think he would’ve approved of how it uses animation to relocate “Las Hurdes” between fiction and reality.

GKIDS will release “Buñuel in the Labyrinth of the Turtles” in theaters on August 16.

This Article is related to: Film and tagged Buñuel in the Labyrinth of the Turtles, GKIDS, Reviews