The actor spoke to IndieWire about playing a Georgian-era pimp and self-submitting for the Emmys. 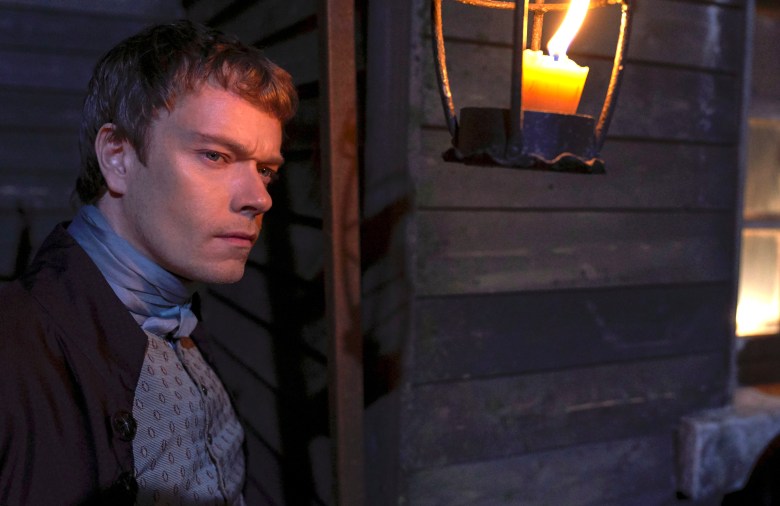 [Editor’s Note: The following contains spoilers from “Harlots” Season 3, Episode 5 and the final season of “Game of Thrones.”]

Alfie Allen is ready to talk about dying on TV, but it’s not necessarily for the show he’s best known for. “It seems that a tragic death is something that is the hot topic with me nowadays,” the actor said in an interview with IndieWire.

After going out in a blaze of Night King-defying glory on the final season of “Game of Thrones,” Allen joined the cast of Hulu’s Georgian-era brothel drama “Harlots” – but not for long. Five episodes after his pimp character Isaac Pincher is introduced, he perishes after meeting the wrong end of a prostitute’s pistol.

His ending is another shock just two episodes after the loss of main character Charlotte Wells (Jessica Brown Findlay), who was Isaac’s secret lover and accidentally fell to her death trying to stop a fight between Isaac and his brother Hal (Ash Hunter). After profiting from her death (and some blackmail), Isaac wants to make things right and give the money away, but is killed by a friend of Charlotte’s mother, Margaret Wells (Samantha Morton).

“There’s definitely an honesty there. He actually does plan to give Emily Lacey the money, and his intentions are true,” said Allen. “He wants her out of the picture so he and Hal can carry on running the business. But obviously it’s not to be. I love his ending. I love the fact that it came at the hands of Margaret Wells and her crew.”

While Allen has been busy with projects – having appeared in “John Wick” and “The Predator,” with “Jojo Rabbit” and “How to Build a Girl” on the way – “Harlots” is his first foray back into TV since “Game of Thrones” ended. The story and what Allen was able to do was vastly different from the HBO fantasy series, although themes of intention and redemption recur. Created by Alison Newman and Moira Buffini, the Hulu period drama is predominantly female behind and in front of the cameras to tell the tale of warring brothels who are making the most of their livelihoods in a world that caters to men. 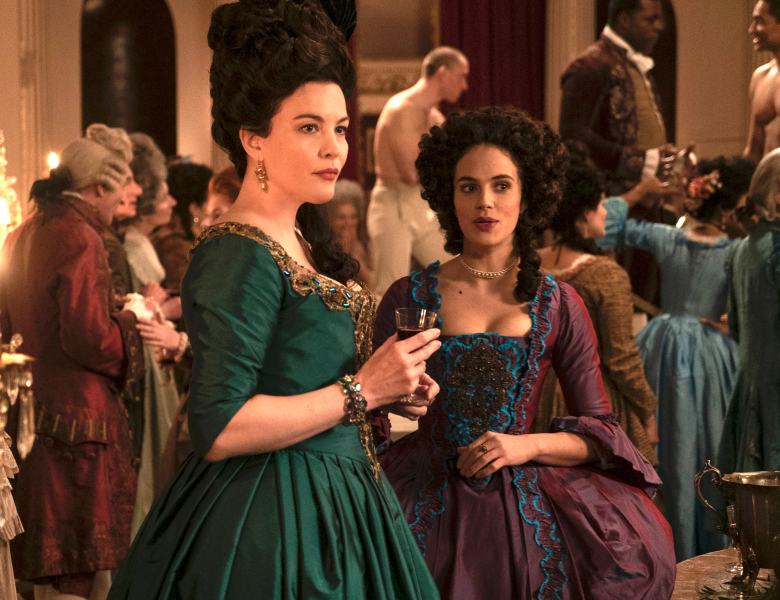 “It being kind of helmed … exclusively by women, written by women, produced by women, and all the lead cast in it are women – that’s something which … hasn’t [happened] in the past and is now. So that is definitely something that drew me towards ‘Harlots’ as a TV show,” said Allen.

“And creatively, that journey being more compact … and also just working on a something that had a completely different sort of pacing to it was interesting,” he added. “Isaac is spontaneous and a romantic, who doesn’t really have a plan. So there is a kind of honestly within him in a way because he’s not so contrived as others are around him. It can get him in sticky situations, but that’s one of the things I liked about him is that he just acts with his heart.”

That instinct gets Isaac into trouble, first prompting him to try to take over Charlotte’s Greek Street harlots, setting fire to the brothel in retaliation of her defiance, and then finally leading to his torrid and tragic affair with Charlotte Wells, and then his eventual death. Despite this “arduous journey,” it’s still a refreshing change for Allen, whose character Theon on “Game of Thrones” had no time for any whiff of romance amidst the war. “Isaac gets to enjoy the benefits of being an 18th century pimp,” Allen said. “In terms of the physicality of the sex scenes that we had, there had to be kind of real moments of connection there.

“But It’s not just love between Isaac and Charlotte. As an actor, it was tough to grapple with having these kind of human moments within the journey, but then also these terrible things that he does and questioning what motivates him to do that,” he continued. “It’s just his feelings of immense rage and lust mixed in with that kind of relationship that he has with Charlotte. And obviously spending a lot of time with Jessica Brown-Findlay was brilliant.” 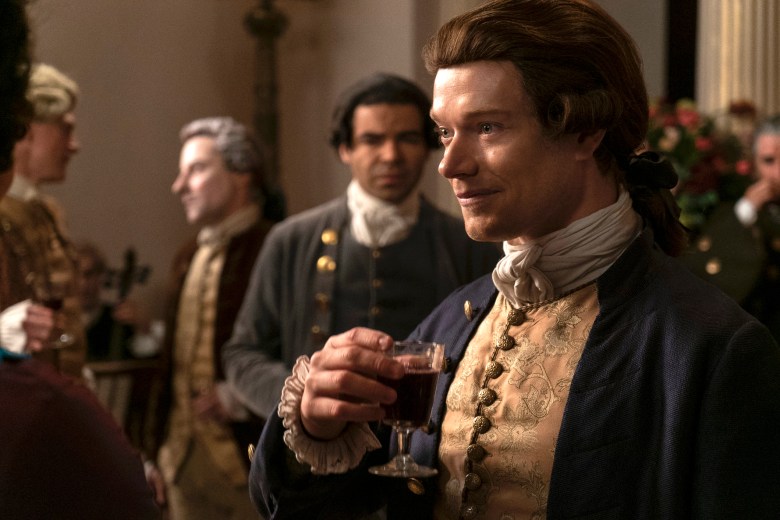 “Game of Thrones” viewers who followed Allen to “Harlots” were also delighted to see him get to enjoy a healthy sex life onscreen after his HBO character was emasculated as part of his torture as a prisoner. “I mean, whatever gets people going, man. If that’s what gets you tuning in, then fantastic,” said Allen with a laugh. “But I would say the physical relationship between him and Charlotte is definitely appropriate for the whole plot and where that leads. It’s sex being used as a weapon and about who’s using it against who.”

Despite those plot differences, the redemption throughline plays a big part in Isaac’s death and Theon’s epic “Game of Thrones” ending, for which he received an Emmy nomination this year. Although Allen’s “Game of Thrones” character had, at one point, betrayed Bran Stark (Isaac Hempstead Wright), Theon died trying to save Bran from the Night King. 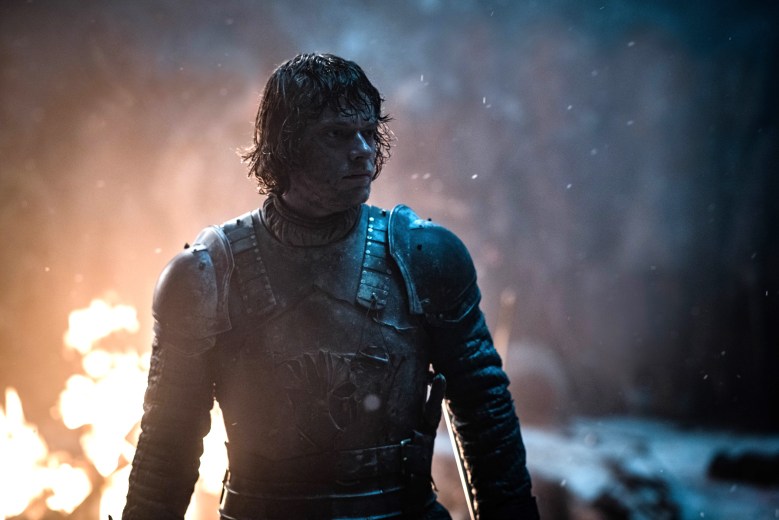 “I enjoyed the fact that I was there with Isaac, who played Bran, and I did my first ever scene with him in ‘Thrones’ in the first season. To to have it end on that note was really, really special to me,” he said.

“I’ll definitely miss the character. It’s just been really lovely to see how people have responded to the show as an ending. I know some people weren’t happy with it, but I thought it was ended beautifully and I just thought … that it was great when people feel such affinity for the character and I just couldn’t ask for anything more, really.”

After spending approximately a decade on “Thrones,” Allen acknowledges its impact not just on his career, but on himself as a person.

“The ways in which it didn’t change my life is kind of nonexistent, you know? It changed it in kind of every respect,” he said. “But I wouldn’t kind of change it for anything. And I would say that I’ve definitely grown up somewhat since the beginning of the show, without a doubt.”

Allen isn’t quite sure if he’s fully absorbed that the show has ended. After all, he’s gone on hiatus between seasons multiple times, and being off the show temporarily is part of the experience.

“I think the night at the Emmys is going to really have a sense of finality to it, and on such a positive note as well,” he said. “It literally is like a dream come true that I get to go there and spend it with people that are really close friends of mine. I love everyone, but Gwendoline [Christie] is someone who’s a really close friend of mine, and to be able to share that experience with her is something I’ll never, ever forget.” 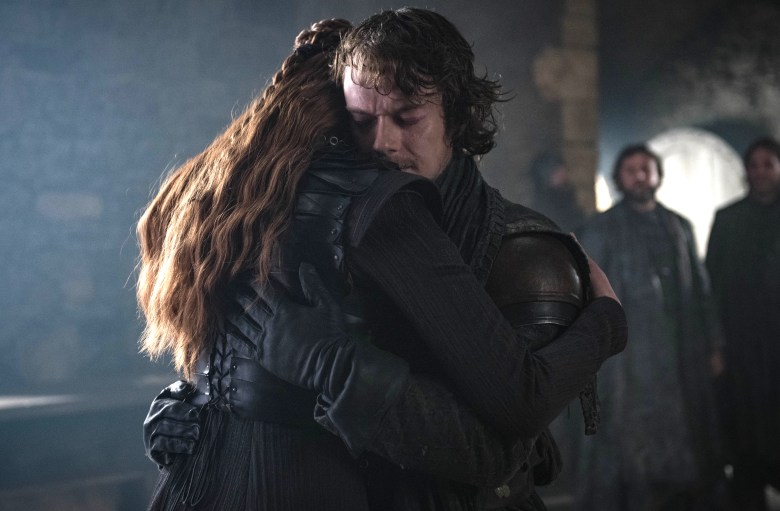 Allen, Christie, and Carice van Houten all paid the nominal $225 fee to self-submit themselves for the Emmys and received nominations as a result, since HBO had focused on promoting other stars for the final season. Allen understands HBO’s dilemma and has no hard feelings.

“I think HBO submitted me way earlier on in Season 1 or Season 3 as the character’s journey developed more and more, but I think there’s just so many main characters in ‘Thrones’ that if HBO were to kind of play that game of submitting everybody diplomatically, it would be really tough,” said Allen.

“I think my team and I just felt it was the right time to submit, and hopefully HBO will reimburse me the $225.”

This Article is related to: Television and tagged Alfie Allen, Game of Thrones, Harlots, Hulu