Gordon Ramsay is famous for his furious tirades on shows such as "Hell's Kitchen," but despite the rigors of filming, his National Geographic show revealed a kinder, gentler side for U.S. audiences. 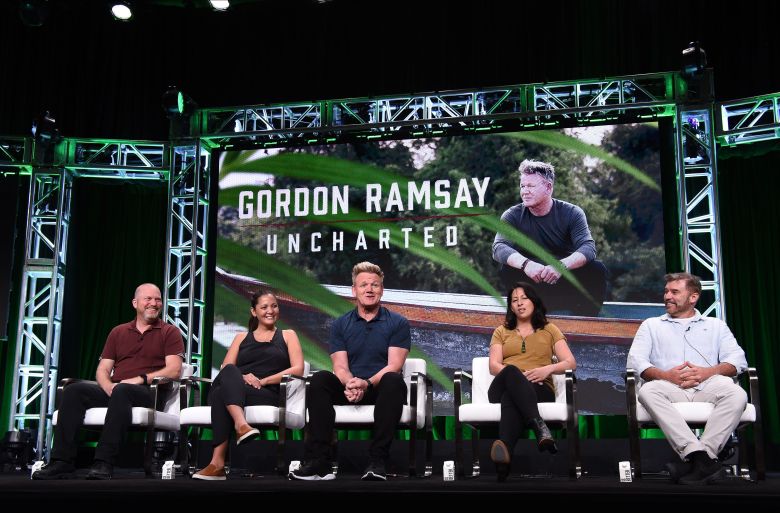 “Gordon Ramsay: Uncharted” saw the celebrity chef explore beyond the hellish, nightmarish kitchens American audiences know him from and venture to the furthest reaches of the planet.

The six-episode National Geographic show, which aired its Season 1 finale this week, followed Ramsay as he adventured to locations with unique, albeit largely unknown, cuisines, ranging from the craggy white waters of Laos to frigid Alaskan mountains. Despite his a larger-than-life personality and its globetrotting scale, “Gordon Ramsay: Uncharted” is a disarmingly personable project, one that cleverly expands the audience appeal of his high-volume TV persona.

IndieWire interviewed several of the show’s crew members during the Television Critics Association Summer Press Tour to discover how “Gordan Ramsay: Uncharted” differs from the chef’s other television projects and to discern the challenges of filming a cooking show in some of the planet’s furthest flung locales.

Ramsay is undeniably the star of the show, but he gives proper attention to each of the locales he visits. He also worked closely with local experts from each region featured in the show, some of who are essentially co-stars in individual episodes. One such person was Kimi Werner, a professional freediver and chef who taught Ramsay how to spearfish on the show’s episode about Hawaiian cuisine off the Hana coast in Maui.

All of the places that Ramsay visits on the show are physically taxing to explore, even perilous. Unsurprisingly, Werner noted that filming a practice as difficult as spearfishing—never mind teaching Ramsay how to spearfish in the short amount of time that the production budget allowed for—was much easier said than done.

“Spearfishing is already challenging, you have to hold your breath, swim to the bottom of the ocean, and try to get a fish to come close enough to shoot,” Werner said. When you throw in another person, safety boats, and underwater cameramen, all those people in the water make it that much more challenging because fish will become wary of you. Gordon was a good listener and I would give him all these orders because I was pressed on time. It was his ability to take directions so well that let us pull it off.”

The mere concept of someone giving orders to Ramsay and telling him when he does something wrong might come as a shock to viewers who know Ramsay from his outlandish performance on shows such as “Hell’s Kitchen” and “Kitchen Nightmares.” Though Ramsay’s thunderous temper and penchant for vulgarity has contributed to his success in the television industry, those characteristics caused some TV critics to express doubts when his National Geographic show was announced.

This Sunday on the Season Finale of #Uncharted on @NatGeoChannel I'm freezing my hair off in #Alaska ! That doesn't mean I can't cook with some amazing ingredients…Here's a look pic.twitter.com/UHW2OWqfN7

Ramsay’s latest series premiered about a year after beloved celebrity chef Anthony Bourdain died by suicide. Bourdain’s last show, “Anthony Bourdain: Parts Unknown,” followed the chef as he traveled the world and discovered lesser-known cultures and cuisine. It was a sensitive program, less about airdropping a famous person into a small town to educate the locals and more about becoming engrossed in and respecting the culture and ideas of each destination.

As Ramsay’s National Geographic show is conceptually similar—on the surface, anyway—to Bourdain’s final series, it’s no surprise that some viewers and critics expressed doubts when the Ramsay show was announced.  The most recurring concern was that Ramsay would spend the series parachuting into various locales, insult the area’s chefs and try to prove that he could cook their food better than them. That take was preemptive, as much of the internet’s anger about the series came before the show even entered production, but to the outside eye, it wasn’t entirely unexpected.

“Gordon’s brand in America is the shouty chef but that’s not his brand in the U.K. and Europe,” Kroll said. “Here, we wanted him to be Gordon but didn’t want people to take offense, so he may spit out an ingredient that is disgusting, but he won’t ever disrespect someone’s food they cooked for him or someone’s culture. If he spits out a worm, he’s going to say after, ‘This wasn’t to my taste, but it is ingenious that someone found this and turned it into food.’”

After lassoing a worm-ridden cactus off a cliff, Ramsay did indeed cook and eat a worm on the show. And he did indeed spit it out quickly, but was nonetheless impressed by the harvesting technique and the resourcefulness of the Peruvians who regularly eat the insect to survive in such a remote area.

Ramsay doesn’t enjoy every dish he discovers and he doesn’t always win the love of the locals he meets, but the chef never comes off as dismissive or standoffish. Ramsay has seen a lot in the rat-infested, ill-managed restaurants he skewers on shows such as “Hell’s Kitchen,” but even he is humbled by some of the challenging scenarios—including kayaking down an unpredictable rapid and diving into the oceans habited with great white sharks—he faces.

Of course, not everything on the show was harrowing. It took some practice for Ramsay to be able to hold his breath long enough to spearfish, but once he finally got in the water with Werner, Ramsay said it was a genuinely special experience.

“There’s fish in abundance and it was like being in the middle of ‘Finding Nemo,’” Ramsay said during the show’s TCA panel. “Every time I looked for Kimi, she was just there, on this beautiful ocean bed. And that’s when you take a minute and think, ‘Shit, I’m the luckiest chef in the world.’”

Cooking the local dishes of each region was, understandably, central to each episode, but “Gordon Ramsay: Uncharted” was as much about adventure and exploration as it was food and drink. It’s a show that is unarguably carried by a celebrity personality, but Ramsay gives proper attention and respect to the lesser-known people, locales, and challenges he meets along the way.

There were plenty of challenges to overcome in creating “Gordon Ramsay: Uncharted,” and only a few of them were about trying to stomach a worm-based diet. The team did plenty of pre-travel prep, but hiking through tangled vegetation is nonetheless challenging for even the most well-prepared groups, according to Mick O’Shea, a cultural guide and adventurer who guided Ramsay through a Laos jungle—which included a kayaking excursion down the Mekong—to meet with chefs from a local village.

“On some days we’d have six different modes of transport, from motorbikes to white water kayaks to just trekking through a jungle, all in one day, for the whole crew,” O’Shea said. “Sometimes we’d have four different groups going in different directions to meet up at one point, which was logistically challenging for one shoot.”

Still, the team couldn’t prepare for every challenge. Ramsay noted that he wasn’t able to rehearse some of the show’s physical segments, but added that he enjoyed putting himself in those scenarios.

“I love that vulnerability, I think,” Ramsay said during the show’s TCA panel. “I’d never been in a kayak before, driving down the road before we hit that incredible river, the Mekong. And Mick said, ‘How much kayaking have you done?’ I said, ‘Dude, look at the size of me. I capsize every time I sit in a kayak.’”

Ramsay navigates through plenty of perils on the show, but “Gordon Ramsay: Uncharted” doesn’t emphasize one of its most impressive feats: Most of the show was filmed back-to-back. Due to the tight filming schedule, Ramsay and his team would head out to one location, film for a few days, and quickly set off for the next location. For the local experts such as Werner and O’Shea, it was difficult to guide and teach Ramsay’s team everything they needed to know in such a short period. As for Ramsay and the others who actually visited each of the regions featured on the series, the nonstop travel took a toll, Werner said.

“When you’re shooting an episode in three or four days it really compresses things,” Werner said. “You might notice that (Ramsay) was quite sunburnt when he was bow hunting, which is because he had literally just spent all day in the ocean with me.”

Kroll has worked on a variety of television projects large and small, including “The Amazing Race,” and noted that the small team of “Gordon Ramsay: Uncharted” was the perfect size for such a project. The show had a core team of 8 people who went to every country, while two additional teams traveled ahead of the main group to prepare shots. Then there were the regional experts and a handful of other local talent, such as drivers and interpreters.

The small team made trekking through hazardous regions more manageable than it would’ve been with a larger group, and it also made it easier to film the series. The show was shot in 360 degrees to allow Ramsay more freedom of movement, which was often essential, given the difficult terrain the team frequently traversed, according to Kroll.

National Geographic will begin production on Season 2 of “Gordon Ramsay: Uncharted” in the fall.