A federal judge said "Nightcrawler" and "Falling" are part of a rich tradition of movies about the sleazy world of freelance TV news videography. 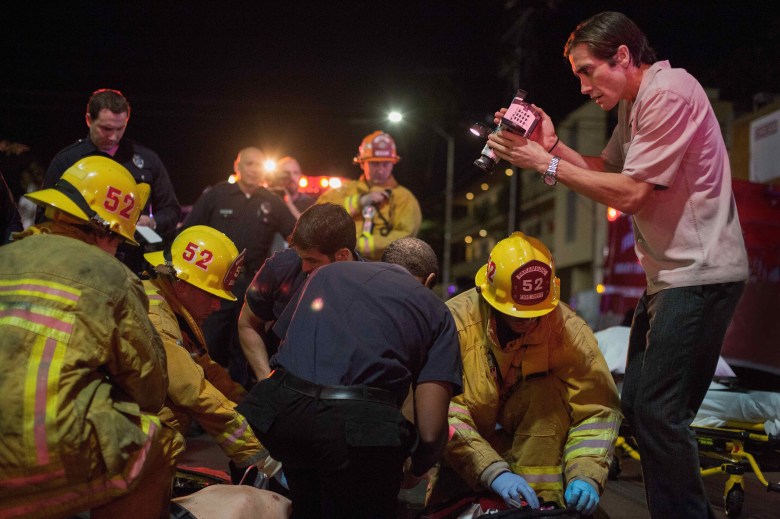 That was the finding of a federal judge Monday when he decided to throw out a four-year-old lawsuit brought against Universal, Bold Films, and Open Road Films, the producers and distributors of “Nightcrawler” starring Jake Gyllenhaal. It received an Oscar-nomination for its screenplay.

From the 1992’s “The Public Eye,” to 2014’s “Nightcrawler,” there’s a collection of movies focused on so-called stringers, the people paid to record late-night police chases, freeway wrecks, and fires for the gawking eyes of TV-news viewers the next morning — and the films, as a necessity, share certain un-copyrightable elements, a legal doctrine known as scènes à faire.

The suit was filed by Richard Dutcher, the director, writer, and star of the 2008 independent drama “Falling,” which, like “Nightcrawler,” follows a stringer working in Los Angeles and explores the moral questions that arise from it.

Dutcher alleged the similar elements of each movie — including freelance videographers driving around LA, listening to police scanners, and rushing to crime scenes to capture sensational footage that makes for must-watch TV — were put out in the world in his film, released six year prior to “Nightcrawler.”

Not so, Judge Dee Benson of the federal Utah District Court ruled. The two films do share that framework, but so do all other “stringer films” that came before them:

Benson ruled that it’s necessary to strip those common elements away in order and look only at each film’s original elements in order to decide whether copyright infringement has occurred. And when you do that, you see that “Nightcrawler” and “Falling” are very different.

“‘Falling’ maintains a moral focus, including an extensive exploration of Eric’s home life and wife,” he wrote in his decision. “‘Nightcrawler’ focuses on an amoral character that seems to place little value on the lives of those close to him.”

Additionally, Benson differentiated the two films by pointing out that “Nightcrawler” lacks the major religious and identity themes of “Falling” — Gyllenhaal’s Louis Bloom experiences no moral development during the course of his worsening actions, while Dutcher’s Eric Boyle, a former Mormon missionary, struggles with his identity.

The two films also share shots of the Mormon church’s towering Santa Monica Boulevard temple, but Benson ruled this is OK because the structure is a real place.

Dutcher has been called the father of Mormon cinema, though he left the Church of Jesus Christ of Latter-day Saints in 2007. He’s best known for his 2000 Mormon missionary film “God’s Army,” which grossed an adjusted $4.41 million on some 200 screens.

“Falling,” had an even more limited release (Salt Lake City and Los Angeles), but was well received by critics.

“An urban thriller so abounding in contempo mood and memorably savage violence that it will be read broadly as Dutcher’s farewell to Latter-day Saints cinema,” Variety’s Robert Koehler wrote.

The latest installment in the stringer genre is the 2017 Netflix series “Shot in the Dark,” which chronicles the work of real-life rival stringers working in LA.

This Article is related to: Film, News and tagged Copyright and Piracy, Lawsuit, Nightcrawler