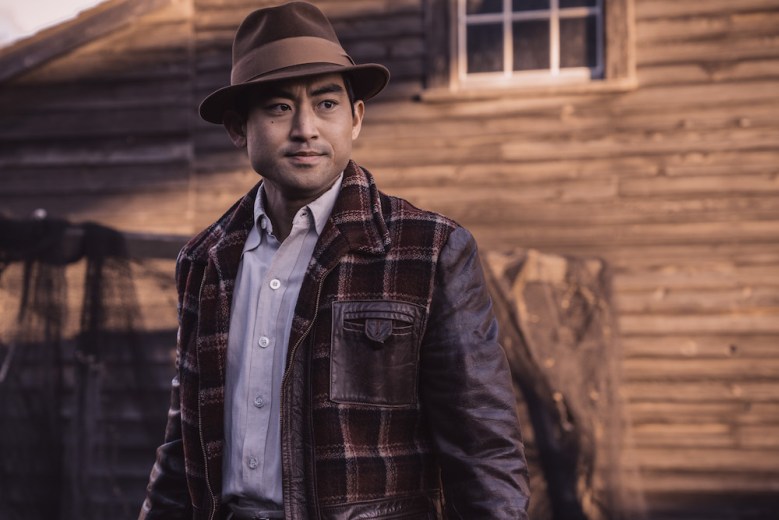 Derek Mio in “The Terror: Infamy”

In 2018, “The Terror” turned a tragic shipwreck into a chilly parable exploring humanity’s darkest corners. Sir John Franklin’s ill-fated Arctic expedition was plagued, in one way or another, by a giant, man-eating polar bear (long live Tuunbaq), but it was the fear inspired by the beast — and, more literally, the lethal cold ol’ Tuuny represented — that AMC’s drama was curious in exploring. Showrunners David Kajganich and Soo Hugh crafted a tale so detailed, so nightmarish, and so frickin’ cold that viewers felt the fear sink into their bones just as the subzero temperatures did to those sailors.

Now, less than a year-and-a-half later, “The Terror” returns for Season 2 with a fresh examination of fear set against an entirely different historical backdrop. From new showrunners Max Borenstein and Alexander Woo, “The Terror: Infamy” studies the horror felt by Japanese-Americans who saw their own country turn against them during World War II. The new season’s timely narrative — which can’t help but evoke the Trump administration’s shameful detention camps built along America’s Southern border — works its way under the onlookers’ skin much more than the special effects implement in Season 1, but the effect is largely the same: “The Terror” remains a thoughtful story of human nature, more haunting in its honesty than its ghosts.

But there are ghosts. “The Terror: Infamy” starts with an eerie sequence where a Japanese-American woman (Yuki Morita) in a soft, white kimono walks down a dock toward the ocean and ends her own life. Masayo’s unnatural movements before doing the deed speak to more than a simple sadness haunting her, and further evidence of supernatural interference quickly starts to stack up. At her funeral, Chester Nakayama (Derek Mio) tries to take photos for the family, but the developed prints show blurry faces next to clear ones. What’s happening is unclear, though its sinister nature is obvious.

Chester lives with his family on Terminal Island, a few miles south of Los Angeles and just off the coast of California. He and his father, Henry (Shingo Usami), are fishermen, but Chester wants more. He’s in love with a Spanish-American student named Luz Ojeda (Cristina Rodlo), and he can’t fathom why his immigrant mother, Asako (Naoko Mori), and father choose to remain confined to one small swath of the big wide world, especially after traveling so far for the pursuit of freedom. 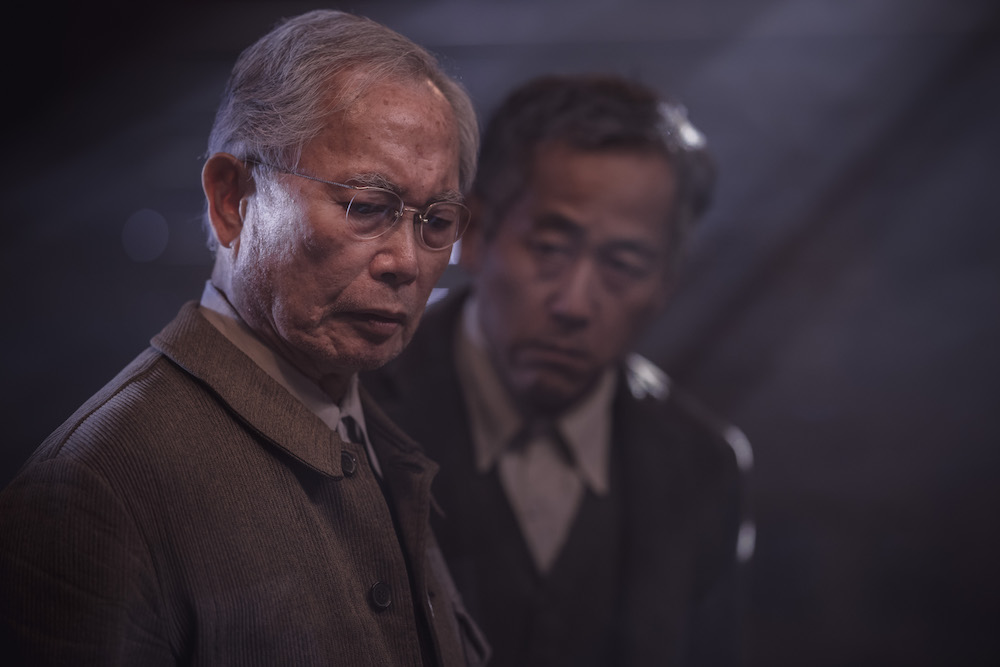 George Takei and Shingo Usami in “The Terror: Infamy”

Given the season’s title, it’s no spoiler to say the first episode’s events build up to December 7, 1941 — a point in time President Franklin D. Roosevelt famously labeled “a date which will live in infamy.” As Henry and Chester sit at the nearby military base, a giant clock is perched above their heads, so when the sirens start to sound and the Navy men begin running to their posts, there’s no mistaking what’s about to happen: The war has come home, though that phrase takes on a whole new meaning for the Japanese-American population uprooted from their lives and shipped off to internment camps.

These camps serve as the predominant setting through the first six episodes, and yet it’s impressive how much movement Borenstein and Woo create, both through forward narrative momentum and various disparate locations. Much of “Infamy” is grounded within the Nakayama family, but supporting characters are built out and a sprawling cast is well-utilized. As a yurei, or spirit, plagues Chester during his quest to prove himself as an independent man, bouts of seemingly madness create gruesome scenes that can’t be simply explained away — unless you believe in Japanese folklore.

There’s plenty of body horror — as limbs are twisted, torsos flipped, and necks cracked — but the cultural ties run deeper than film. Season 2 dives headfirst into the kaidan genre of Japanese literature, creating new ghost tales exhumed from mythic philosophy. Relying on such cultural touchstones is a respectful gesture to the very real suffering of the interned immigrants, as well as an affecting source of terror, even if the latter doesn’t compare to the distress felt by the former. 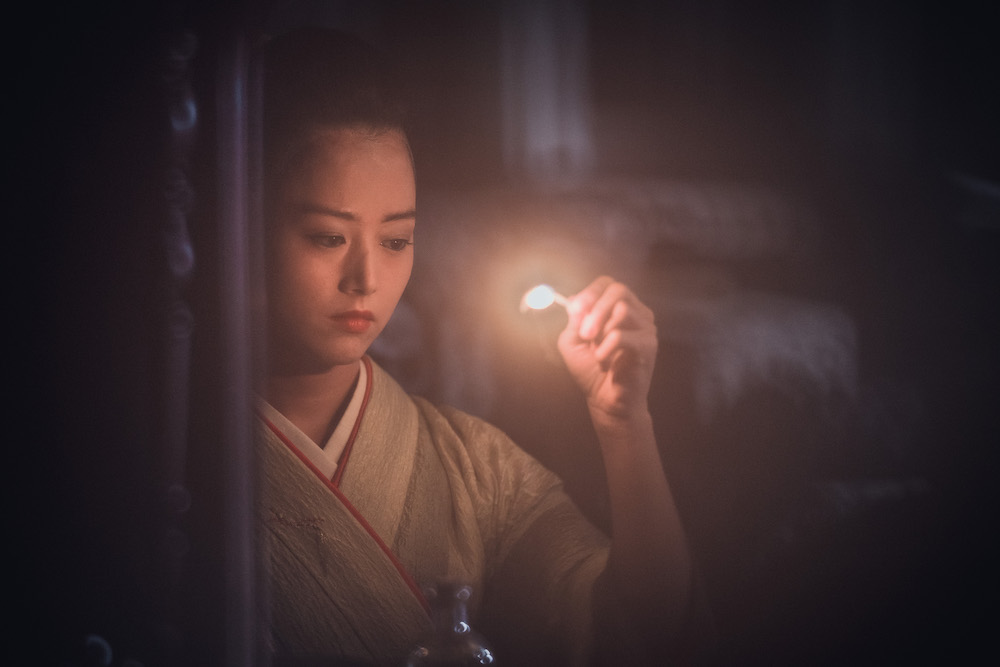 Kiki Sukezane in “The Terror: Infamy”

“The Terror: Infamy” works best when it invests in the natural drama of its characters, rather than the supernatural. While the performances can be rote, partially in service of the dense history being recreated, there’s a purity in their convictions and a power in their direct approach. When Chester’s fear for his family (and himself) starts to push him toward the edge, the good-natured, straight-shooting protagonist Mio has built thus far makes his spiral all the more unsettling. There aren’t a lot of surprises lurking in hidden layers of his turn, but Mio’s lead isn’t meant to be secretive: He’s showing his cards, pretty much all the time, and that works for scenes conjuring a ’40s era family melodrama.

Borenstein and Woo show a great deal of trust in the core story, the grand production design, and the modern parallels to carry most of “Infamy’s” emotional heft. While each beat of the story may play out as you expect, that inevitability largely makes the action itself more haunting. “The Terror” Season 2 can feel overly studious, with the supernatural horrors mixed in to keep you from spending each episode researching what really happened through Google. But through all the edifying, “Infamy” never forgets the human cost, or ignores the horrifying possibilities of what can happen when compassion is set aside out of fear.

This Article is related to: Television and tagged AMC, The Terror, The Terror: Infamy, TV Reviews