Backstage after the latest live broadcast, the show's head writer and showrunner explained the delicate balance of political satire in charged times. 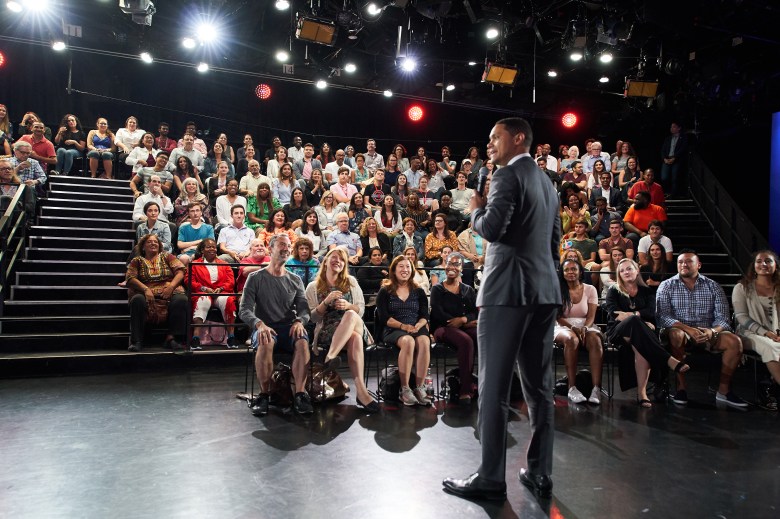 For the fifth time this year — and the second time this week — “The Daily Show With Trevor Noah” aired live on Comedy Central Wednesday night, with jokes written moments beforehand about the just-concluded Democratic presidential debate. But Noah’s most resonant comments were left off-camera, and they spoke to the tricky balance of a program designed to engage with a charged political environment even as it avoids a didactic tone.

While Noah jabbed at the tension between candidates, he resisted editorializing on the big picture while live. That came during the commercial breaks, when he turned to the studio audience who had watched the debates in the room before the broadcast.

“You know, I think winning an election should be based on ideas, not how well they can discredit or destroy someone else,” he said, and shrugged, as the show came back on the air.

That was it — no punchline, zero satire, just pure frustration with the system. And it returned at the end of the night, when Noah bid adieu to the room after the show’s “moment of Zen” aired over the credits. “I really hope Democrats get their shit together after that debate,” Noah told the crowd. “It’s like a messy family affair. I’m in a place right now where I don’t see anyone beating Donald Trump.”

In the nearly four years since Noah took over “The Daily Show” from Jon Stewart, the election of Donald Trump has altered the nature of the political landscape. But even the fraught environment of the primary race hasn’t changed Noah’s tendency to avoid punditry over punchlines.

This approach, aided in part by the South African’s outsider perspective on American politics, has proved a double-edged sword throughout his tenure. On the one hand, Noah’s measured approach strikes a dramatic contrast to predecessor Jon Stewart, whose convictions about the American electorate transformed him into one of the great cultural arbiters in recent memory.

At the same time, Noah often cuts through partisan argumentation with an understated, even-tempered approach and has gradually used that to develop the show’s younger fanbase. The show recovered from a widely-reported 37% ratings drop in Noah’s first season and saw a 13% year-over-year increase during the first quarter of 2019 in the male 18-34 demographic. This evolution comes alongside a dramatic growth in the show’s social channels; industry tracker ListenFirst reports “The Daily Show” has the most engaged social audience in late night TV.

But if “The Daily Show” has captured America’s future leaders, what message does it want to send them when its host keeps many of his opinions to himself?

“We go where the jokes take us,” said head writer Dan Amira, settling into a common area behind the studio shortly after the broadcast concluded close to midnight. “Let’s say you’re somehow an undecided person. On any given day, we will probably show you something horrible that Trump did. It’s pretty self-evident.”

Showrunner and executive producer Jen Flanz sat down and chimed in. “But we didn’t make it up,” Flanz said. “We’re just showing it to our audience.” In the 21 years that Flanz has worked on the show — predating Stewart’s arrival by a year — she has grown accustomed to the challenge of mining humor from the news while dancing around the pressure to take a side. “We’re not trying to sway anyone to think anything,” she said. “We’re just presenting what we know as facts. People should be smart enough to figure it out.”

Then again, like much of America, the staff was blindsighted by the outcome of the 2016 election. For the live show that aired on Election Day, they wrote three versions — one for a Hillary win, another for Trump, and a third if it was too close to call — but the team struggled to move past the eventual outcome. “I think on some personal level there were definitely people who thought it was hard to bounce back from that election,” Flanz said. “It took people a while to adjust to how we would cover this president. But at the heart of it, the show is trying to figure out what’s funny about this. And this is the subject matter we’ve been given.” 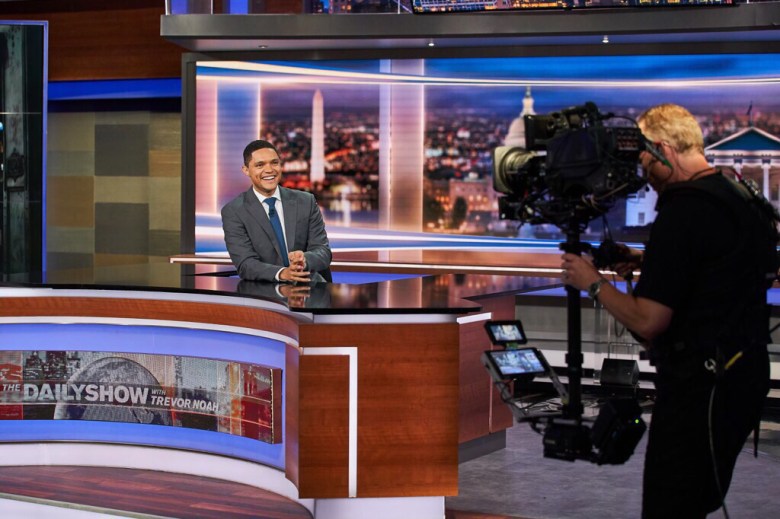 Trevor Noah during a live broadcast of “The Daily Show”

The live format has allowed “The Daily Show” to use a strategy that taps into the rapid-fire news cycle. Since Noah took over, the show has aired 13 live shows, and plans to do more over the course of the election season. “On a night like this I can’t imagine going on the air and doing a show that isn’t about the debate,” Flanz said. “We’d have to stay here and watch them anyway. It’ll be old news if we didn’t do it live.”

Yet only certain aspects of the show come together at the last minute. An opening segment about news coverage leading up to the debate was written in advance, Flanz said, with the bulk of the debate jokes prepared for the show’s second half. They treaded lightly, with most of the gags focused on candidates sparring on broad issues like healthcare and prison reform. The show ignored some of the more unsettling moments of the evening, including the three times that protestors interrupted the debates; the first instance involved calls for New York mayor and candidate Bill de Blasio to “Fire Pantaleo,” the police officer responsible for shooting Eric Gardner, and the other interruptions addressed immigration and deportation.

“It’s hard to make fun of other people there,” Flanz said. “What joke could we make about that?” Amira said it did come up in the writers room. “We briefly thought about it,” he said. “In the limited time we have, it’s better to focus on what the candidates said.”

They beamed over the evening’s most effective joke, in response to a tense exchange between Joe Biden and Cory Booker that ended when Booker told Biden “you’re dipping into the Kool-Aid and you don’t even know the flavor.” After airing the clip, Noah quipped, “You know what’s cool about being black? You can just make up phrases and white people don’t even know if it’s real.”

“Nobody could’ve told the joke we told tonight about Cory except for Trevor,” Flanz said. For now, Noah remains the only black man with a prominent late night comedy show slot, but he typically eschews racial humor for the wide-eyed curiosity of an outsider looking in on the American electorate. “Trevor is very good at talking to people rationally and calmly,” Flanz said.

That itself presents a sobering alternative to the shrill tenor of modern-day punditry. Noah’s sit-down with conservative commentator Tomi Lahren was a breakthrough for “The Daily Show” host as it found him dismantling her arguments with cautious assessments of her framework. While the audience booed Lahren’s brash, racially-charged remarks about Black Lives Matter, Noah quietly talked her into a corner. “She asked to come on and it was a really great conversation about what people on Fox are saying,” Flanz said. “Not talking to people shuts down the conversation and doesn’t give you a chance to highlight points you want to make.”

Democrats obviously prefer a platform on “The Daily Show” over conservative pundits — to date, several Democratic candidates have already appeared as guests — but Flanz said they were holding the door open for the one prominent Republican who rules them all: Donald Trump.

The show invited Trump during his candidate days, and the offer remains open. “I have specifically spoken to Trevor about this,” Flanz said. “Trump is the president of the United States. I can’t tell you how that conversation would go, but we certainly have a lot of questions we would have for him.” Amira added that if Trump ever did agree to come on, “we’d make sure it’s not a softball interview, and we’d hold his feet to the fire.”

The show is not without its subversive moments. A recent sitcom-style sketch about student debt found correspondent Roy Wood Jr. contemplating suicide to get out of his loans until his wife reminded him they wouldn’t be able to afford the funeral. “We can go real dark when it’s funny,” Flanz said. But could that sort of humor spur its viewership into action? “I think it’s great if it inspires people to be politically active and vote,” Flanz said. Amira chimed in: “I’d be surprised if you watched the show and said, I’m going to vote for Donald Trump.” Flanz held up her hands. “We like to be equal opportunity, but it’s hard in this climate,” she said.

Nevertheless, they have resisted any attempt to assess debate performance in the live format. “On a live show, we’re not going to try and explain the ins and outs of someone’s health care plan,” Amira said. “We’re going to hit the highlights, make jokes, have fun, but there’s no time to delve into any one topic too deeply.”

Flanz, however, said her views on how audiences process the show have evolved. “I used to feel like people shouldn’t use it as a news source,” she said. “But now people get their news all over, and we have a lot of younger viewers. If there are 15-year-olds who watch ‘The Daily Show’ and then they go google a story later, it’s better than nothing.”

This Article is related to: Television and tagged Comedy Central, Politics, The Daily Show With Trevor Noah, Trevor Noah