Daniel Scheinert’s Alabama-set dark comedy is about two bumbling guys trying to cover up their friend's death. But what killed him? 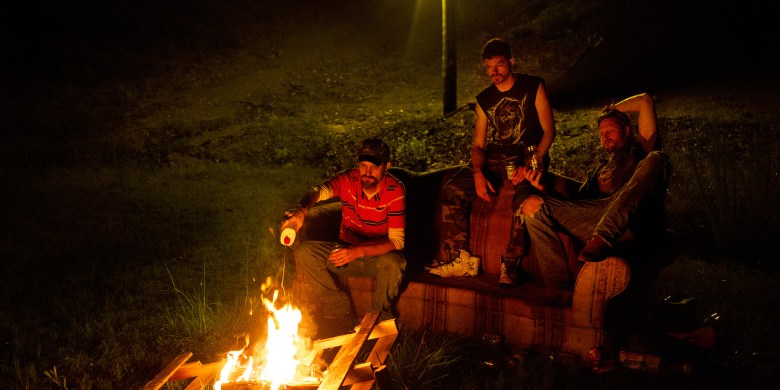 “The Death of Dick Long”

Wayward characters have struggled to cover their crimes throughout film history, but the conundrum at the center of “The Death of Dick Long” is more abstract than that. In director Daniel Scheinert’s Alabama-set dark comedy, the aforementioned Dick (played by Scheinert, mostly as a corpse) dies for mysterious reasons in the opening scenes, leaving dopey pals Zeke (Michael Abbott Jr.) and Earl (Andre Hyland) stumbling through a series of comic misadventures to hide the circumstances of his demise.

The new trailer for the movie, which A24 releases on September 27, doesn’t spoil that twist — but it certainly captures the loopy pleasures of this oddball caper, which blends small-town Southern eccentricities with unusual emotional resonance. “Dick Long” premiered at Sundance’s NEXT section in January, where even audiences who expected something off-kilter didn’t quite know what they were in for. And that’s a testament to this singular movie’s sneaky appeal.

Scheinert is best known as the co-director of “Swiss Army Man,” the surrealist fantasy best known for Daniel Radcliffe playing a farting, talking corpse. “Dick Long” also involves peculiar circumstances surrounding a dead guy, but this time, his friends do all the talking. Abbott, Jr. and Hyland are hilarious as a pair of dysfunctional party boys whose backwater antics lead to more than they can handle. Their ensuing attempts to keep Dick’s death a secret, and their own involvement in it, suggest what might happen if Harry and Lloyd from “Dumb and Dumber” stumbled into a Coen brothers movie.

And boy, they sure do a lot of stumbling. While Zeke struggles to control his nerves while hiding his problem from his suspicious wife (Virginia Newcomb), the pair also have to contend with poor Dick’s own clueless wife (Jesse Weixler), who has no idea why her husband hasn’t come home. In the meantime, they inevitably raise the suspicions of a local police officer (Sarah Baker) tasked with sorting out the conditions behind Dick’s death.

All of which is to say that you think “Dick Long” seems to hail from a familiar mold of storytelling for much of its running time, at least until the mystery of Dick’s death comes to light. As the trailer makes clear, those circumstances are so unexpected they defy any simple description — and we won’t try here, but needless to say, they’ll force you to reconsider everything about the situation leading up to that revelation. Dick himself asks his friends in the first scene: “Y’all want to get weird?” But the movie holds back on revealing how weird things really get.

While these frantic circumstances might give the appearance of Southern caricatures, Scheinert — an Alabama native — imbues them with genuine intentions, crafting an absorbing and unexpectedly provocative look at his characters’ distinctive subculture. “Dick Long” is the rare movie to reference Papa Roach and Nickelback without a trace of irony, and that’s not the only surprise it has in store. Watch the trailer below.

This Article is related to: Film and tagged A24, The Death of Dick Long, Trailers