The Safdies add one more impetuous creation to their jittery New York City milieu, and it’s a hypnotic blast to watch him come to life. 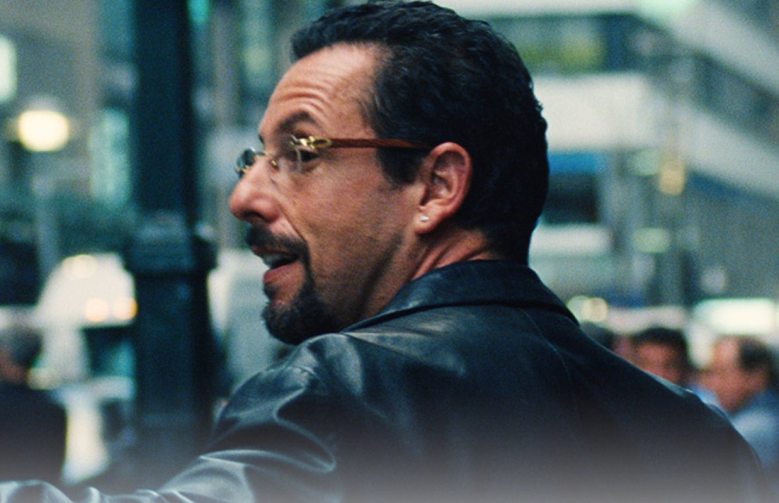 Editor’s note: This review was originally published at the 2019 Telluride Film Festival. A24 releases the film on Friday, December 13.

Adam Sandler has embodied many obnoxious, self-absorbed figures over the years, but with “Uncut Gems,” he plays the most contemptible character in a 30-year career. Directors Joshua and Benny Safdie’s followup to “Good Time” is on that same wavelength — abrasive, deranged, driven by an insuppressible blur of movement and noise. It’s also a riveting high-wire act, pairing cosmic visuals with the gritty energy of a dark psychological thriller and sudden bursts of frantic comedy, and it’s the first movie to truly commune with Sandler’s performative strengths since “Punch-Drunk Love.” If “Uncut Gems” leaves people rattled, disoriented, grasping for clarity in the chaos of one man’s hectic routine, that all speaks to the sheer precision of a visionary achievement in full control.

After all, it’s a Safdie brothers movie. Ever since 2008’s “The Pleasure of Being Robbed,” these sibling filmmakers have excelled at burrowing inside the mindset of combustible characters driven to destructive tendencies just to survive another day. The dysfunctional father of “Daddy Longlegs” may as well exist in the same restless universe as the furious junkies in “Heaven Knows What” and Robert Pattinson’s hapless criminal and loving brother in “Good Time.” With “Uncut Gems,” the Safdies add one more impetuous creation to their jittery New York City milieu, and it’s a hypnotic blast to watch him come to life.

Sandler’s Howard Ratner, a fast-talking jeweler always chasing the next big score, speeds through nearly every scene of “Uncut Gems” as if dodging bullets and mounting attacks at once. Ratner’s claustrophobic office in Manhattan’s diamond district matches his ramshackle presence: The bullet-proof glass doors have a buzzer that barely works, and often leave clients hopelessly trapped on the wrong side. Howard juggles calls from angry mobsters and bookies, shrugs off domestic squabbles with his infuriated wife (a smarmy Idina Menzel), and sneaks to his apartment for late-night trysts with girlfriend (Julia Fox), who also happens to work for him.

Howard thrives in the mayhem, as the opening minutes make clear, with cinematographer Darius Khondji’s camera swirling around the figure as he goes about his wild days; a remarkable percussive soundtrack by Daniel Lopatin (aka Oneohtrix Point Never) overwhelms the constant whir of action. If that’s all the movie had to offer, the endurance test would have its limits.

By then, however, it’s clear that the Safdies (and their writing partner, Ronald Bronstein) have more ambitious plans: An awe-inspiring prologue, set in shadowy depths of an Ethiopian mine, chronicles the discovery of a costly rock filled with shimmering opals. The ominous sequence suggests a hat-tip to Indiana Jones, at least until the movie turns psychedelic. The camera careens closer and closer to the rainbow-colored diamonds and then keeps going, veering inside their fibers as if channeling the star gate in “2001: A Space Odyssey.” But as the shot resolves itself within Howard’s colonoscopy, the magic becomes entwined Howard’s rough-hewn world, epitomizing his desire to possess otherworldly power even as his actual world constantly unravels.

Yet Howard keeps moving because he sees potential just around the corner. As the movie settles into its rhythms, he’s on the verge of landing what he sees as his next big score. The year is 2012, if for no other reason than to allow former Celtics forward Kevin Garnett to play himself as an active player (Garnett retired in 2016).

Brought into the jeweler’s shop by a freewheeling broker (Lakeith Stanfield), Garnett finds himself drawn to the beauty of the opal rock that Howard brandishes just to show off. Howard doesn’t want to sell the object, but allows Garnett to take it home for the night for good luck on his next game. For insurance, Howard secures Garnett’s championship ring, then abruptly pawns it off to bet big on the next game. That insane pileup of choices becomes a house of cards that collapses in delirious slow motion over the next two-plus hours.

Stanfield’s character deems Howard a “fucking crazy-ass Jew,” a description that could readily apply to the Sandler oeuvre as a whole — but in Howard’s case, it’s practically a compliment. A goateed hustler with glittery diamond earrings who never seems capable of calming down, Howard’s neuroses compel him to work through every new challenge in his quest to realize a twisted American dream. That quest suggests “Mean Streets” by way of Preston Sturges, with a touch of “Death of a Salesman” to boot — a mesmerizing chronicle of desperate schemes, and it’s hard to imagine anyone but Sandler at the center of it.

While “Good Time” unfolded as a linear chronicle of one troubled night, “Uncut Gems” speeds through Howard’s life as a cascade of clashing moments. The Safdies’ ability to string these sequences together without taking a single breather is absolute narrative marvel: Howard goes from an impromptu Philly roadtrip to watching his kid in a bizarre school play, dodging gangsters in the parking lot, pushing back against a looming divorce during the family’s Passover seder, arguing with a bookie (Eric Bogosian) and talking a baffled family friend (Judd Hirsch) into helping him rig an ill-fated auction. Phew.

These circumstances pile up with an astonishing kinetic energy. The Safdies clearly idolize Robert Altman (and have openly cited his gambling romp “California Split” as inspiration here), but they’re more precisely operating within the grimy New York milieu that Martin Scorsese made famous in the ‘70s (Scorsese serves as an executive producer). At the same time, they’ve constructed a confident extension of the anti-heroes found throughout their work, and the movie owes more to their own expanding oeuvre than the obvious precedents for it. Even “Lenny Cooke,” the Safdies’ tragicomic documentary about a wayward basketball star, comes into play as the movie builds toward an NBA playoffs game with impossibly high stakes.

“Uncut Gems” won’t sit well with anyone who prefers protagonists easy to like or stories with a clean moral compass. But there’s a genuine subversive glee involved in following Howard through his inane quest for all the money he can score, and watching him set himself up for failure with such conviction the whole way through. Howard may be doomed from the start, but in the process of resisting his inevitable fate, “Uncut Gems” makes his ludicrous plan infectious.

“Uncut Gems” premiered at the 2019 Telluride Film Festival. A24 releases it theatrically on Friday, December 13.