Costa's latest vision of Cape Verdean immigrants — a highlight from this year's Locarno Film Festival — is another lyrical vision of somber people confronting their past. 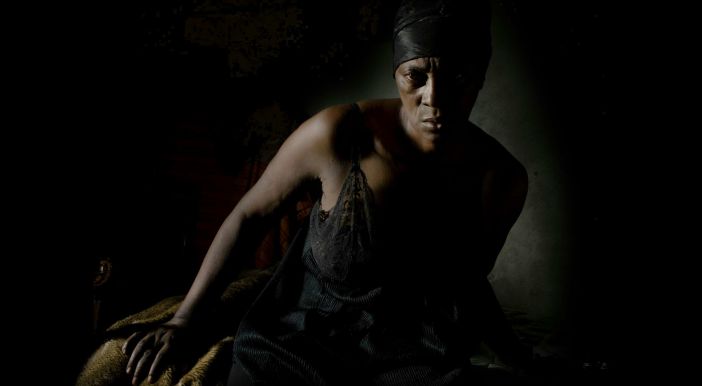 The mystery and wonder of Pedro Costa’s filmmaking defies any specific category other than his own unique blend. The Portuguese director conjures dark, dreamlike visions of post-colonial neglect and yearning that hover somewhere between fantasy and neorealism, horror and melodrama, spirituality and desperation. “Vitalina Varela,” Costa’s fifth journey into the shantytown Fontainhas outside of Lisbon, once again showcases Costa’s masterful ability to mine cinematic poetry from a unique environment and the mournful figures who wander through its murky depths.

The Costa Expanded Universe stems back to 2006’s “Colossal Youth,” when Costa first began exploring the Cape Verdean residents of Fontainhas by casting members of the immigrant community as themselves. Costa’s ravishing blend of light and shadow captures the characters as they wander the claustrophobic interiors of their ramshackle homes and muse about their wandering lives. Costa’s dour, humorless aesthetic takes time to settle in and certainly requires a degree of openness to his approach, but “Vitalina Varela” is a perfect distillation of the rewarding nature of that process.

This time, he gives the titular Vitalina — her real name — the spotlight. The somber middle-aged widow had a supporting role in Costa’s similarly abstract 2014 wonder “Horse Money,” as she returns to Lisbon from Cape Verde to bury her dead husband who abandoned her long ago. That conundrum consumes the bulk of the new movie, as Vitalina arrives in the squalid neighborhood days after his mysterious death and lingers in his home, whispering to the past.

Vitalina does that a lot. While solemn men she doesn’t know wander through her home, she often drifts into empty corridors, issuing profound monologues toward her husband’s unseen ghost as she laments the lavish life he promised her and how it fell apart. Costa and his usual cinematographer Leonardo Simões capture Varela in gorgeous chiaroscuro closeups, as the static camera lingers on stunning compositions with such delicate palettes they may as well be Renaissance paintings brought to life.

As Varela’s quiet, eerie recollections carry numerous scenes, the movie develops an absorbing visual rhythm out of her memory banks — the sense that we’re drifting through the emotional process of wrestling with the past as she confronts the empty void it left behind. Rather than attempting to root Varela’s story in some precise journey, he allows her ruminations to take center stage. Once, she recalls, he promised her a lavish existence in their Cape Verdean home, but when he fled he never came back for her.

Now she lurks in his shabby dwelling where the roof is on the verge of collapse, the door frames hang too low, and rocks crumble onto her head when she takes a shower. “You turned lazy like the rest,” she says, positioning the movie’s beguiling atmosphere in context: “Vitalina Varela” presents a chilling vision of what happens when hope and perseverance evaporate, and the survivors can only sort through the wreckage to survive each passing day.

Yet even as “Vitalina Varela” communes with the past, it also has a timeless quality, much like its predecessors. Yes, the very existence of Cape Verdeans who occupy the movie speak to a past of colonialist persecution, devastating wars, and generations of impoverished struggle. At the same time, the expressionistic turmoil transcends that lineage. Costa’s work borrows the language of Val Lewton’s classic RKO horror movies, from “Cat People” to “I Walked With a Zombie,” extrapolating the spookiness of the unknown into a soulful vision of solitary existence.

But Vitalina’s not entirely alone in coming to grips with these bitter truths. Costa regular Ventura, a lanky figure whose hands tremble from an unspecified neurological disease, once again surfaces following his memorable lead role in “Horse Money”; this time, he portrays the community’s despondent priest, who has given up on his parish long before Varela’s arrival. At her beckoning, he admits to have covered the costs of her wayward husband’s destructive lifestyle, as well as his funeral, but even that act of kindness hasn’t left him with much to live for. Lecturing to an empty parish filled with dusty chairs and an unlocked door, he may as well be inhabit a post-apocalyptic milieu.

Together, however, the pair wrestle through their environment, swapping biblical observations and sorting out the nature of their surroundings. Ventura delivers a fascinating monologue in which he suggests the Cape Verdean people have been born from shadows; through Costa’s cinema, they step into the light. Varela’s stern, focused glare suggests a kind of determination to keep moving ahead despite the tragic overtones that threaten to consume them from every angle. To that end, “Vitalina Varela” marks the first of Costa’s films to actually chart a path of escape, the closest he has come to finding some measure of idealism in utter despair.

Few directors paint with such a singular brush. In the years since Bela Tarr retired, Costa has become the standard bearer for a certain type of dour, lyrical filmmaking steeped in ambiguity and rich with implications. His movies hover in a twilight zone of psychological disarray, but there’s such transcendent beauty to his work that it never becomes a bleak aesthetic exercise. As “Vitalina Varela” proves, Costa empowers his subjects by framing them as majestic storytellers and letting their stories take charge.