"Between Two Ferns" co-creator Scott Aukerman was certain the joke would be the viral hit of Obama's episode, and he was right. 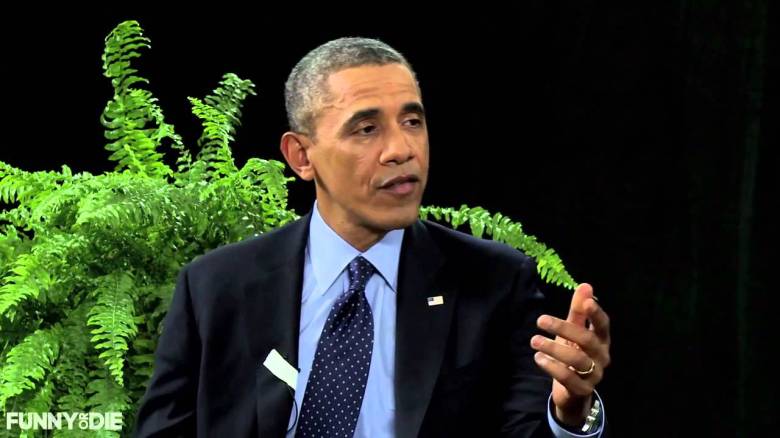 With “Between Two Ferns: The Movie” now streaming on Netflix, the web series’ co-creator and director Scott Aukerman recently took some time to look back at one of the show’s greatest hits while speaking with The Daily Beast’s Matt Wilstein. Aukerman discussed at length the Barack Obama episode of “Between Two Ferns,” which aired in March 2014 during Obama’s second term as President of the United States. Obama’s White House approached Hollywood creators for video ideas that would drive people to support the Affordable Care Act. Aukerman himself proposed having Obama on “Between Two Ferns.”

“When it finally became something that it seemed like he was going to do, you start having their people try to shape it and preemptively try to get in there and be like, ‘Well, let’s talk about what’s really going to happen,’” Aukerman said of beginning to deal with Obama’s White House staff. Obama’s team reportedly told Aukerman, “Obviously, you can’t do it like a real ‘Between Two Ferns.’”

Cody Keenan was Obama’s head speechwriter at the time and had to make the president’s “Between Two Ferns” appearance represent Obama’s image. “The final product had to balance a few things,” Keenan told The Daily Beast. “It had to remain true to what ‘Between Two Ferns’ is, or why would Funny or Die do it? It had to plug the ACA as much as possible, or why would we do it? Simply put, it had to walk the line between remaining authentic for fans, and attractive to the people we were trying to reach. But it also had to protect the dignity of the office of the president of the United States.”

Aukerman said he told the White House that his team would have final cut over the episode and urged Obama’s staff to allow the show’s writers to make hard jokes. The episode was written largely without many setbacks, but there one was joke that Obama’s team pushed to cut.

“There was one joke where Zach [Galifianakis] says, ‘How does it feel to be the last black president?’ which kind of seems prescient at this point,” Aukerman said. “Obama’s people were like, ‘Hey, that’s just not going to fly.’ And I said, ‘Oh man, that’s the funniest joke.’”

Aukerman engaged in a back and forth with Obama’s staff over letting “Between Two Ferns” ask the black president question. When the staff approved, it was “Between Two Ferns” host and co-creator Zach Galifianakis who then hesitated about going through with it. Galifianakis told Aukerman shortly before the Obama episode started filming that he was cutting the joke because he felt Obama would not like it. Aukerman assured Galifianakis that Obama would be expecting the joke and would be “thrown off” if not asked. Keenan said that in between filming takes of the episode he was approached by Galifianakis, who kept saying, “I can’t believe you guys are letting us do this.”

The last black president joke ended up going viral because of Obama’s answer: “Seriously? What’s it like for this to be the last time you ever talk to a president?”

Read more about the episode by reading Aukerman’s full interview over at The Daily Beast website. “Between Two Ferns: The Movie” is now streaming on Netflix.

This Article is related to: Television and tagged Between Two Ferns, Scott Aukerman, TV News