"Black Mirror's" winning streak continued, as "Deadwood" was topped by the two-time incumbent. 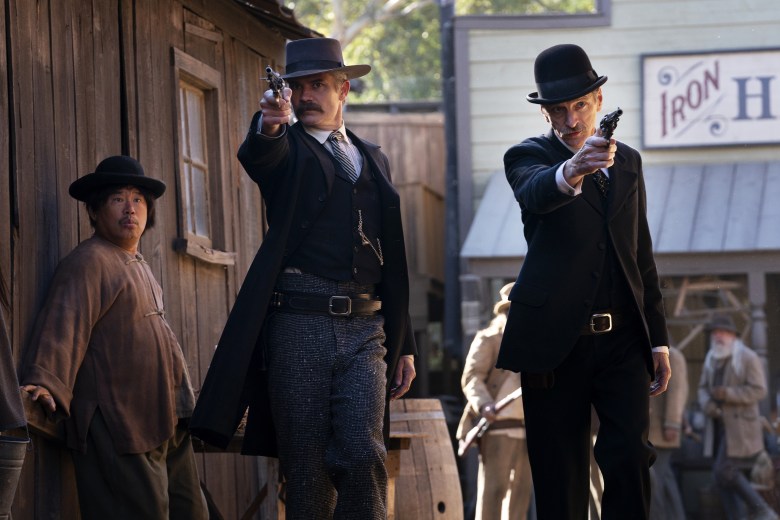 “Black Mirror: Bandersnatch” has won the 2019 Emmy for Outstanding TV Movie. It marks the second win this year for the Netflix original series, and the third year in a row that a “Black Mirror” entry has won Best TV Movie.

“Bandersnatch” was released as a standalone entry in the “Black Mirror” franchise, and the first interactive version of the show. The synopsis reads as follows: “In 1984, a young programmer begins to question reality as he adapts a sprawling fantasy novel into a video game and soon faces a mind-mangling challenge.”

At last weekend’s Creative Arts Emmy Awards, “Bandersnatch” won Outstanding Creative Achievement in Interactive Media within a Scripted Program. Many expected its victories to end there, as HBO’s “Deadwood” revival movie was heavily favored to win Best TV Movie. David Milch’s farewell movie earned nine nominations, but ended up winning none. In the past, “Deadwood” won eight Emmys during its original run on HBO.

The Creative Arts Emmy Awards were handed out Saturday, September 14 and Sunday, September 15 (each starting at 5 p.m. PT) at the Microsoft Theater in Los Angeles, CA. The Creative Arts Emmys honor outstanding artistic and technical achievement in a variety of television program genres, guest performances in weekly series, as well as exceptional work in the animation, reality, and documentary categories.

More than 50 trophies are given out over the two-day period, and FXX will air a condensed version of the ceremony on Saturday, September 21 at 8 p.m. ET.

The 70th Primetime Emmys will air Sunday, September 22 at 8 p.m. ET on Fox. Check out IndieWire’s Emmy predictions to see what series and which stars are expected to walk away with the gold, and keep checking IndieWire for the most accurate power rankings out there. Follow IndieWire on Twitter and Facebook for all the latest Emmys news, including live updates as the awards air Monday night.