Roy Cohn sent Ivy Meeropol's grandparents to the electric chair, but the documentary she's made about him is frustratingly anonymous. 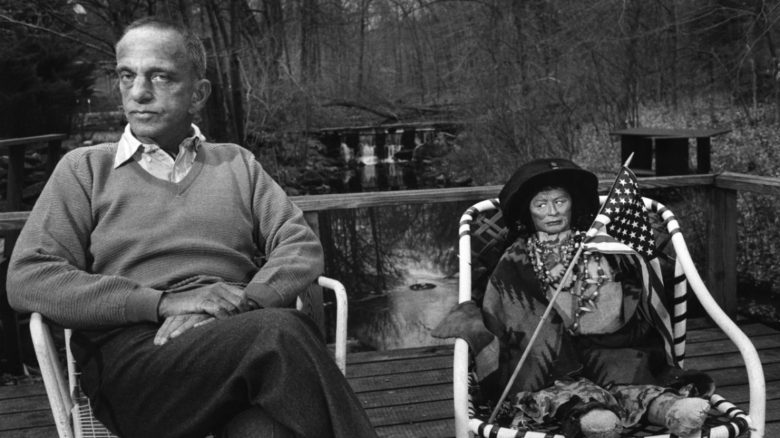 Even when Ivy Meeropol was just a little girl, the boogeyman always had a name in her house: Roy Cohn. To the rest of the world, Cohn was the unscrupulous power broker who had first risen to notoriety as the assistant prosecutor responsible for the executions of “atomic spies” Julius and Ethel Rosenberg. To Meeropol, born more than a decade after the fact, Cohn was the man who effectively murdered her grandparents long before she would ever have a chance to meet them.

From a young age, Michael Meeropol taught his daughter about how her family was torn apart for allegedly selling nuclear secrets to the Russians, and perhaps also about the ruthless, pug-nosed, pit bull of a lawyer who all but did the deed with his bare hands. Now a 51-year-old filmmaker, Meeropol even opens her latest documentary with black-and-white home video footage of her childhood, in which Michael reiterates the story to Ivy as if it will one day be her cross to bear. It’s hard to say if he’s passing this information down like a burden, or if Ivy is meant to inherit it as a birthright — if it’s something Michael is preparing his daughter to remember, or something that he’s already training her not to forget — but it’s clear that the rest of her life will unfold in the shadow of what preceded it.

With all of the baggage that its director brings to the project, it would be reasonable to assume that “Bully. Coward. Victim. The Story of Roy Cohn” offers a uniquely personal look at one of the most ruinous figures of the 20th century; that it doesn’t just contextualize its subject as Joseph McCarthy’s stooge or Donald Trump’s mentor, but as a multi-faceted monster who couldn’t have cared less about the trail of carnage he left in his wake. Even the title of Meeropol’s film — borrowed from the words that are sewn below Roy Cohn’s name on the AIDS quilt that stretches across the Washington Mall — suggests a documentary that aspires to see its namesake through a variety of different lenses: As a relentless aggressor, as a manifestation of his own self-loathing, and (to his eternal chagrin) as someone who eventually fell prey to his own humanity.

To a certain extent, that’s what Meeropol does. At once both heartfelt and exasperatingly broad, “Bully. Coward. Victim.” provides as fair and prismatic a character study as Cohn’s thin character might possibly allow. In addition to a scattershot biography that traces Cohn’s life from his formative days as a Columbia Law student to his infamous nights at Studio 54 and all points in between, the film complements its vast array of archival footage with a diverse smattering of talking heads that range from Cohn’s most basic flunkies (like his former driver, who bears an uncanny resemblance to his ex-employer) to his most savage critics (“Angels in America” playwright Tony Kushner, who wrote Cohn into his Pulitzer Prize-winning epic). This might be the first movie ever made that features both John Waters and Alan Dershowitz.

And yet, Meeropol’s empathetic attempt to see the man she knew as a monster only reveals how little was actually lurking behind Cohn’s glassy eyes. For all of her efforts to make sense of a thug who tried to intimidate the world into submission, the director unearths the kind of self-evident sound bytes that have followed Cohn around since the 1950s. Someone quotes him as saying that “Law is an adversarial profession.” Someone else remarks that “Roy didn’t have friendships, he had alliances.” Eventually we arrive at a classic nugget that collects the man’s sociopathic ethos into just a few words: “Make the law, or subject to it — choose.” But the most damning line — both for Cohn, and for this frustrating documentary about him — comes from the late power broker’s cousin, who has no problem throwing an estranged relative under the bus: “Roy was pure evil.”

The past would be a lot easier to understand if anyone were actually pure evil, but the fact of the matter is that Cohn’s particular brand of sociopathy is very simple to diagnose; much like his protégé, the current President of the United States (at least at the time of this writing), Cohn was an uncomplicated man who managed to insert himself into historical complications. The mishegoss that Cohn marinated in was fascinating — entire movies could be made about each chapter of his life, especially “the Lavender Scare,” or his pitiable last days when it all fell apart — but the whole of it is all too obvious. There’s nothing more boring or played out than an insecure narcissist who’s conditioned to think of vulnerability as the opposite of strength, and driven by an all-consuming need to be the most powerful man in the room.

Meeropol’s film starts with a strong hook, but it ultimately takes a more roundabout path to the same roadblocks that stymied another recent Cohn documentary. Our resurgent interest in Cohn stems from the same reason that none of us need to see a documentary about his thought process: It’s on our televisions and in our newspapers every day. It’s in the concentration camps that have cropped up along America’s southern border, in the all-or-nothing hostility that has consumed its political system, and in the corruption that Trump reflexively spreads with every phone call. “Bully. Coward. Victim” is often engaging, if more for its history than for its insight, but the film’s erratic final third defines the project by its unrealized potential.

The deeper this documentary gets into the weeds of Cohn’s financial dealings, the more striking it becomes that Meeropol is telling the wrong story, or at least squinting at a story that she might have seen more clearly in a mirror. She points the camera at her own family with great hesitation, as if she doesn’t want to hex them any further with the residue of treason, or make this movie feel like a one-sided attack.

Both of those potential explanations are perfectly understandable, as is Meeropol’s apparent disinterest in relitigating the Rosenberg trial (though she obviously sides with the idea that Ethel was innocent, and Julius less guilty than Cohn made him out to be). And yet, the documentary becomes almost heart-stoppingly raw and immediate whenever Meeropol reflects on the personal impact of Cohn’s power games. Interviews with her father hint at how difficult it was to grow up as a child of “treason,” and the extent to which his life has been a Sisyphean battle against the forces of corruption; the film’s most extraordinary clip finds Michael Meeropol and Roy Cohn on a talk show together at some point in the early 1980s, and it’s devastating to see how only one of them still cares about what happened. Another striking moment comes when Meeropol interviews one of the male hustlers who was driven to Cohn’s Greenwich house in the dead of night, and saw first-hand how his venom sprang from his vulnerability.

Meeropol herself is almost entirely absent after the aforementioned prologue, though you can often sense her behind the camera, pushing towards a kind of catharsis that she doesn’t have the words to describe. The closer she gets to Cohn, the harder it is to feel her presence. This may be “The Story of Roy Cohn,” but Meeropol doesn’t meaningfully engage with how it might be her story, as well — with how “victim” may have been written on that corner of the AIDS quilt for her to find. She indicates how that could be, and then lets that bullying coward fill the rest of the film with his bluster. Meeropol has more to say than Cohn ever did, but it’s a shame that she doesn’t say it here.

“Bully. Coward. Victim. The Story of Roy Cohn” premiered at the 2019 New York Film Festival. It will air on HBO in the future.