Ang Lee unveiled "Gemini Man" to journalists today and explained why he was drawn again to high frame rates cinematography and creating a 23-year-old Will Smith.

When Ang Lee introduced the first-ever screening of the full version of his new film “Gemini Man” he focused on the obvious: the many, many technical challenges involved in making a movie unlike any made before. It meant the creation of Hollywood’s first fully digital human character, “Junior” — a motion capture of Will Smith transformed into a 23-year-old version of the actor – while at the same time experimenting with the high frame-rate (120 fps) and 3D cinematography he employed in “Billy Lynn’s Long Halftime Walk.”

Lee said that one of his principal goals was to continue his “pursuit of what digital cinema should be,” but joked that at the same time, he “still had to deliver a Will Smith clone movie.”

“Gemini Man” is, at its heart, a Jerry Bruckheimer action film — but it’s one that Lee constantly reworked, returning to some of the themes that have dominated his career. When he was first sent the script, which Paramount was anxious to shoot soon, Lee returned a nine-page letter proposing how he would approach a page-one rewrite, which he assumed would yield a polite rejection. As he told a gathering of journalists during a post-screening roundtable, he was surprised when the studio said yes, and gave him six months to develop the script.

“The subject matter of nature versus nurture really got to me,” said Lee, speaking with journalists after the screening. “Gemini Man” centers on 51-year-old Henry (Smith), a retiring ace sharper shooter, who discovers he’s being hunted by his younger clone. “I’m a cinema person [and] just in my head when I heard the idea… It really makes you wonder about your own existence and what you would tell your younger self,” he said. “I’m old enough to think about that kind of thing.” 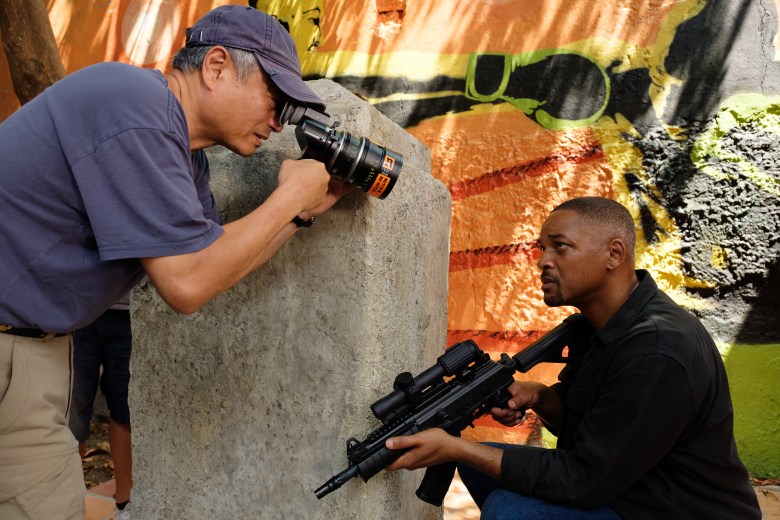 Lee made it clear that one of the three main reasons he agreed to the project was the challenge of creating Junior, which he knew from the start couldn’t be accomplished through de-aging like is being used for “The Irishman.”

“We do the whole body, not just the face,” said Lee. “We do it from scratch – that’s why I don’t like to call it de-aging. It’s not just brush up. Age does more mysteries than just wrinkles. It’s kind of sad what life does to you. Every layer of skin, bones, it’s how you age, your eyes, the enamel on your teeth. Just the subtle changes.”

Lee referred to the creation of Junior as a “leap of faith.” The process was so labor-intensive that he only saw final rendered images of Junior three months ago. One early test involved creating a CG Smith and placing him in a car scene from “Bad Boys,” and viewers — when showed side-by-side with footage from the actual movie — couldn’t tell the difference. However, the process that was used for the “Bad Boys” Pepsi challenge was radically different than how the living, breathing, and acting Junior would be created.

“That was for morale,” Lee said of “Bad Boys” test. “For the real deal, you don’t see it until a good half of year after post. You’re two feet are already in. It’s really just a leap of faith. It’s also an attitude. You won’t allow, if it doesn’t work, we shelve the movie, I don’t know.” He laughed. “No. Until you test [it] and people say, ‘OK, oh, we’re watching the movie, we’re not thinking that’s a digital person.”

According to Lee, to create Junior as he would appear in the final film, the base had to be a motion capture of Smith, which then would be altered, sometimes using footage from older Smith movies as reference. Lee was adamant that a pure CG character, from his perspective, was not possible at this time – it’s impossible to use only references.

“I believe in a cocktail, at least for now, you blend what’s real and what’s not,” said Lee. “Sometimes, you feel like you are doing a poor imitation of God’s work. It’s very challenging. It’s quite enigmatic. So it’s really a mixture of things… we cannot really use his old reference, only in shots [where we were having] trouble. And then we look at his old movies with similar angles … Half of his shots don’t look like him, but no one cares, because [they know it’s Will Smith.] It’s very curious.” 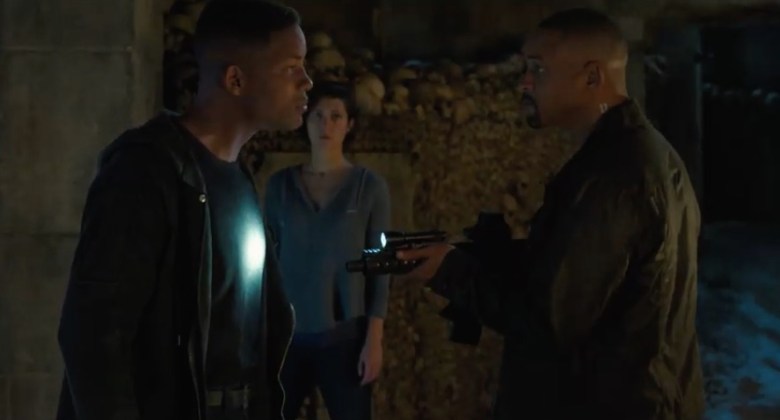 The process was painstaking, leaving Lee scratching his head most days. The final product of Junior does look real, even in a handful of tight medium shots of the character in dramatic scenes opposite Clive Owen, and later with Smith himself. But the young clone’s screen persona is different from the pop culture figure he’s based on: The naive soldier is earnest, with a polite southern demeanor – while looking every bit like a younger Smith, the digital creation is not burdened with carrying any of the Smith’s charisma and personality that make him a movie star.

One of the other major reasons Lee said he wanted to do “Gemini Man” was the opportunity to use both the motion capture character and the high frame rate to create a realistic, but carefully choreographed, fight scene.

“I shot ‘Crouching Tiger,’ and for 20 years I couldn’t crack it. Nobody can crack it. You hurt people,” said Lee. “It’s really dancing, it’s not really fighting. When I flip you over, you let me make that flip, it’s not because I flipped you over.  The physics are the opposite of what a real fight is, and plus the strobe [how Lee refers to 24 frames per second], you never see intentions. So it was never realistic.”

The canvas of the action film in general allowed Lee to use the 120 frame rate approach to delineate action far more clearly than is possible in the chaos of a normal 2D action scene. Each movement and facial expression is far more articulated.

To take a crack a more realistic fight scene, Lee and his team spent nine months in post trying to alter and perfect a four-minute fight scene between the older and younger Smith in hand-to-hand combat. Lee explained that while the overall beats of the fight choreography can’t be altered, he and his team added scrapes, missed punches, and the messiness of fighting in general.

“A realistic [fight] lasts what, two seconds? You see [it on] YouTube. You want drama, so you have to choreograph it. It’s really a paradox,” said Lee. “I still [tried] to change their choreography and worked with stunt [team], but each time I see a bloody nose, and somebody gets hurt, I have to stop.  So I still do the traditional Hong Kong style of choreography, but [it’s] more visceral, more thinking of the realism of somebody exchanging punches, and when they’re angry, the drama, the staging, it’s more drama-orientated and more messy, [which makes] it more favorable to the later animation work.” 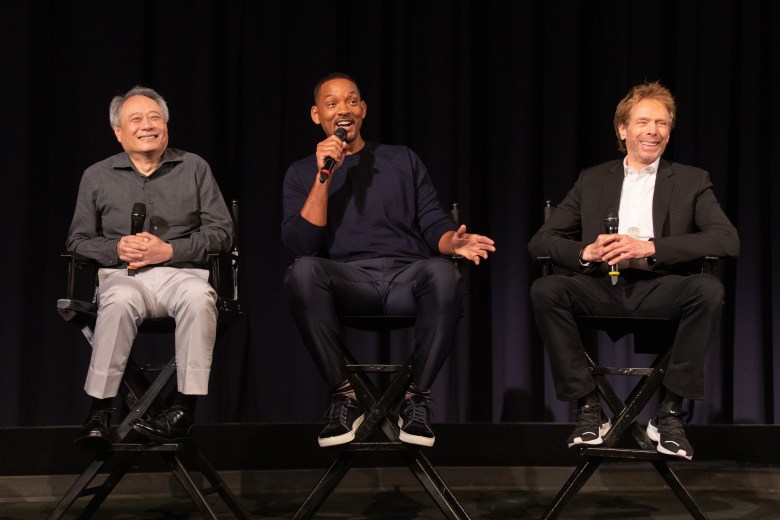 Lee was extremely pleased with the possibilities of shooting action in the HFR and 3D, which captures action in a different way.  He pointed to an impressive action scene early in the movie involving a motorcycle chase as a prime example.

“If it’s a 2D movie, because it’s so strobey, the way to pump energy is horizontal speed, speed and quick cuts, people get used to that,” said Lee, adding that with 120 fps, the amount of detail in the action changes everything. “You get people excited, I think it’s the detail [you] get to see it. I think that’s new a kind of filmmaking, and I think it’s this kind of staging [frontal], in and out of the perspective, a first-person-third-person kind of exchange. It’s a different kind of language, involvement, for both the filmmaker and the viewer.”

In both action and non-action scenes, Lee used the incredible depth of the frame, composing shots that allow the viewer to look far into landscapes and locations. At the same time, he was able to play the foreground and background action against each other by utilizing how the viewer’s eye picks up on any discernible movement with the high frame rate frame. Watching the movie, it’s clear that he learned a great deal of what worked and didn’t work from “Billy Lynn.” He also experimented with new ways of lighting scenes. The night-time photography is often day-for-night, as the viewer is able to peer endlessly into the detail of the blue night.

Lee has clearly been motivated in recent years by a desire to find the aesthetics and visual language of his stories through new technologies. He’s still learning how it works, but said he was convinced that 2D storytelling doesn’t translate to 3D HFR.

He described the challenge this way:  “[Within] a dimensionalized clarity, how do you find what stimulates our eyes [and are you] willing to divulge yourself to a fictional world and join a story?”

He ended his discussion of the film by expressing a desire for larger audiences to experience the film in 3D at the highest frame rate possible. “The theatrical experience,” he said, “should be more than telling a story.”

This Article is related to: Film and tagged Ang Lee, Gemini Man