What do sexting, Luke Wilson, health codes, and a rabbit named Benjamin Bunny have in common? Atom Egoyan's absurd new film has the answers. 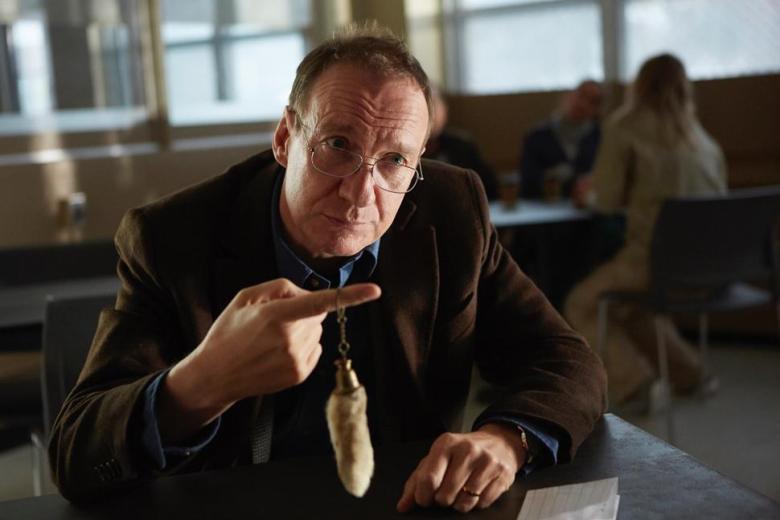 A riveting but utterly ridiculous melodrama about the burden of guilt and the value of bunny shit, Atom Egoyan’s “Guest of Honour” layers one absurd turn on top of another with the confidence of a veteran architect, and yet — even at its most perversely entertaining — this very unpredictable movie only feels as if it’s working in spite of itself.

Egoyan, a Canadian filmmaker who found success at a young age with hits like “Speaking Parts” and “The Sweet Hereafter,” has long been fascinated by intimate stories about how painful truths come to light — but he’s never followed that process down such a bizarre path before. Few people have. After all, it takes a special kind of auteur to piece together a plot that starts with some illegal sexting, contains several different montages of David Thewlis using a meat thermometer, and splinters a tale of guilt and shame into so many parallel timelines that the whole thing feels like a soap opera directed by Christopher Nolan. And yet, the craziest part is that Egoyan almost pulls it off. You can appreciate what he was going for, at the very least, and you might even want to applaud him for trying — we clearly needed someone to tell this story.

“Guest of Honour” begins by knocking you off balance, and the film sustains its strange momentum by never allowing viewers to regain their footing. It opens with a beautiful twentysomething named Veronica (Laysla De Oliveira) meeting with a priest (a clerical Luke Wilson) to discuss the details of her father’s imminent funeral. Their conversation starts on a note of dutiful reverence — a daughter trying to ensure a personal ceremony for her dad — but it soon turns into a therapy session with a confessional edge, and becomes the framing device for a time-hopping account of slander, recrimination…and deep-fried rabbit ears. Mostly deep-fried rabbit ears. In fact, it isn’t hyperbole to say that no movie (nor any other piece of artwork in recorded history) has ever been quite so focused on the ins and outs of eating deep-fried rabbit ears. But we’re not there yet.

Seen in flashback, Veronica’s father Jim (a sniveling, uncertain David Thewlis) is/was a British expat who came to Canada with dreams of opening his own restaurant, but has spent most of the years since working as a health inspector. He’s one of those people that you hear about but never really see, as he spends most of his time skulking around beer gardens and burger joints and closing them down for one kind of contamination or another. His wife has been dead for some time, and people aren’t exactly lining up to be his best friend.

Veronica is all Jim has, and — twist! — she’s in jail. What’s more: She wants to be in jail. Brace for a flashback within a flashback, because suddenly we’re joining Veronica as a high school conductor who’s chaperoning her band on a short tour around the country. Why is this innocent-looking trip layered under the most ominous strains of Mycheal Dyana’s erratic score (a nice suite of music that feels as though it were written by someone who, understandably, had no idea what tone Egoyan was going for)? It’s going to take some patience to find out, as “Guest of Honour” is structured like an ensemble TV show that cuts away whenever it needs to leave you hanging for a commercial break. Even the meaning behind the movie’s title is saved for a gotcha moment in the third act.

Suffice to say, Veronica got into some risky business with an obsessive bus driver and a flirty teenage student. Is she — as an even deeper layer of flashbacks soon implies — attracted to underage Aryan boys due to a traumatic psychosexual episode from her past? Does she want to stay locked up because she’s afraid of acting on her own impulses? Or might Veronica might be punishing herself for something she’s already done? It’s a testament to the cagey but frustrated conviction of De Oliveira’s performance that all of these scenarios feel possible until hard answers are provided.

Over time, it becomes clear that Veronica and Jim were both tormented by their mutual inability to understand each other. “Guest of Honour” coheres into a knotted story about someone who shoulders the blame for every bad thing that’s ever happened to her, and someone else who passes the buck whenever possible and encourages others to do the same. It’s also about a rabbit named Benjamin Bunny who plays a very pivotal role as the connective tissue between all of these various plot threads — and whose feces is lavished with the same attention that Alfonso Cuarón reserved for the dog shit in “Roma” — but to say any more about him would spoil the fun.

Anyway, Egoyan’s structure is byzantine, if always clear, and it’s most effective when pitting these disparate guilt strategies against each other. “Guest of Honour” occasionally backslides into a broad conversation about whether it’s healthier to burden oneself with too much culpability, or to disavow it altogether. Neither extreme seems functional, but the film arrives at a poignant-enough compromise by the end. The journey there pinballs between silly and laughable, and there are a number of implausible redirections along the way, but Egoyan pushes forward with impressive self-belief; it becomes almost impossible to divine if he knows how absurd everything is, or if it even matters. A sidebar about the perniciousness of reputation, and how hard it can be to escape your own shadow, suggests that Egoyan may be operating from a place too personal for easy categorization. Besides, with an actor of Thewlis’ unctuous talent in the driver’s seat, it’s easy enough to just sit back and enjoy the ride.

“Guest of Honour” premiered at the 2019 Venice International Film Festival. It is currently seeking U.S. distribution.

This Article is related to: Film, Reviews and tagged Atom Egoyan, Guest of Honour, Reviews, Venice