TIFF: The rising star takes on another hilarious teenage role in Caitlin Moran's adaptation of her own wild memoir of her evolution into a sassy, sexy rock critic. 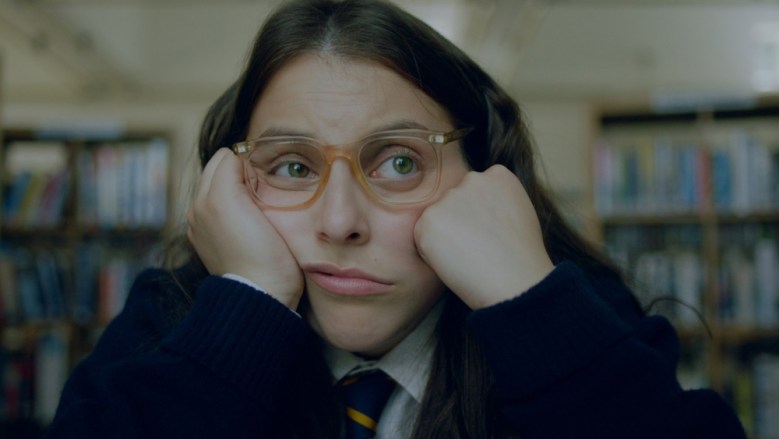 “How to Build a Girl”

Johanna Morrigan (Beanie Feldstein) is used to not seeing leading ladies like herself — goofy, a little chubby, academically inclined, friendless, super into dogs — in books or movies. Hell, she’s used to not even really seeing herself in her own life, instead whiling away her time dreaming of an existence where she might have the chance to shine (mostly, that means moving away from the dreadfully boring UK council estate she’s grown up in). A poet, a reader, and a follower of such diverse luminaries as Sylvia Plath, Sigmund Freud, and even the fictional Jo March, Johanna has a spark, but absolutely nothing to fan it with.

While most stories like Johanna’s might get a bump from the introduction of a romantic suitor, Johanna isn’t into that either, and as she announces during the energetic introduction to Coky Giedroyc’s winning “How to Build a Girl,” her philosophy is more evolved: “I do not think my adventure starts with a boy, it starts with me.” She’s right, and what follows is a smart twist on the coming-of-age comedy.

Adapted by author and journalist Caitlin Moran from her own memoir of the same title, Giedroyc’s coming-of-age comedy picks up with Johanna (some defining details have been lightly changed from Moran’s own life, including the protagonist’s name, all the better to get to the heart of the story) at a crucial juncture in her life. She’s a whip-smart student, but her social life is nil. She’s a talented poet, but even her literally award-winning efforts devolve into points of hilarious shame. She’s mired in fantasy, but aware that it’s all day-dreaming without any action behind it. Basically, she’s a teen.

“I am blessed with a rich internal life!,” Johanna proclaims without a smidge of irony, but even the most basic of her real-world whims are rebuffed (she desperately wants to be close enough with her beloved English teacher to call her by the familiar moniker “Mrs. B,” but even she’s not having it, constantly reminding her prize student to call her by her full name). Imagine Feldstein’s “Booksmart” character without a drop of self-awareness and best described as being just a plain old doofus: that’s Johanna.

Johanna’s social life might be lacking, but at least she’s got a loving brother, Krissi (Laurie Kynaston), who has his very own punk rock zine and a pack of cool friends. When Krissi sees an ad for a young “gunslinger” to write reviews for a London-based rock mag, he encourages Johanna to go for it. After all, her poetry hasn’t panned out lately — thanks to a gut-bustingly funny appearance on a local news show to read her latest, an ode to her dog — and the constantly poor Morrigan clan could use some extra cash. Plucky and unique as ever, Johanna sends off a review of the “Annie” soundtrack (yes) and is pleased to hear back from the hip dudes at the rag, eager to meet her.

They are, of course, making fun of her, but that hasn’t stopped Johanna before, and her mix of writerly skill and absolute lack of shame temporarily endear her to them. Armed with a local assignment and a shocking new look (think Mad Hatter pulled from the local thrift shop, topped off with her signature canine-themed backpack), Johanna’s new life as wily rock critic “Dolly Wilde” gets off to a fine start (it helps that’s surprised to discover she actually likes music). When she finally lands a plum gig — a feature interview with the ridiculously appealing singer John Kite (Alfie Allen) — old Johanna and new Dolly collide in heartbreaking fashion.

Feldstein, despite tripping over the required working-class Brit accent required, inhabits the character with ease, and is measured enough to make the differences between Johanna and her previous coming-of-age characters pop. She’s certainly got a genre that works for her, but she’s adept at finding the shades in very different young women. And, perhaps more importantly, she knows how to find their heart. Other characters don’t get nearly as much attention, with Paddy Considine getting lost as Johanna’s silly father, Frank Dillane cast as an obviously bad-news romantic foil, and Sarah Solemani tasked with playing Johanna’s dead-eyed mom.

Nearly ruined just months into her fledgling career, Johanna is forced to make a choice: stay true to her optimistic spirit or toughen up into a poisoned-penned critic who hates everything. The evolution isn’t subtle, and soon Johanna is literally toasting “to evil!” with her work pals and plastering over her wall of heroes (which come to life, Harry-Potter-portrait style, to advise her) with her own venomous reviews (sample headline: “Bohemian Crapsody”). Johanna’s arc isn’t nearly as unique as her spirit, and while the beats of “How to Build a Girl” become entirely predictable as the film zips along, Feldstein’s charm keeps it enjoyable, while Moran’s trademark humor keeps the laughs coming.

How do you build a girl? Giedroyc’s film offers one answer: with a lot of pain. Johanna may be forced to cycle through the necessary plot points to grow into something new, but the film lets her get ugly and mean and messy on the way there, with Feldstein still winning enough to ensure we’re rooting for her. The adventure starts with her, and she carries it through to somewhere unexpectedly delightful, if not necessary: the shining promise of womanhood, on her terms.

“How to Build a Girl” premiered at the 2019 Toronto International Film Festival. It is currently seeking distribution.

This Article is related to: Film, Reviews and tagged Beanie Feldstein, How to Build a Girl, Reviews, TIFF