TIFF: Unjoo Moon's energetic and empathetic look at the rise of the "I Am Woman" singer has cliches to spare, but it's also got a high-note performance from its lead. 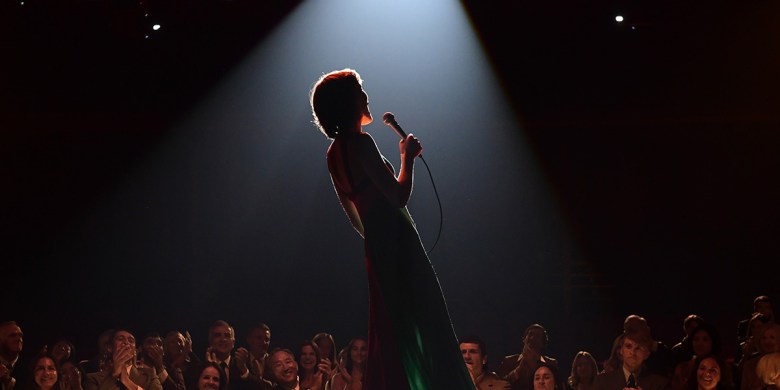 There are a couple of tropes that seem to inevitably spell disaster for any biopic: the character who coughs a lot (and nobody notices) and the character who sniffs a lot of coke (and everyone ignores). Unjoo Moon’s fact based-accounting of singer Helen Reddy’s life — titled “I Am Woman,” after both her biggest hit and her essential ethos — is beholden to such cliches, but the sheer star power of breakout leading actress Tilda Cobham-Hervey, combined with the movie-ready career path of Reddy and Moon’s clear respect for her, set it a cut above other genre entries.

Respiratory-based ailments are anathema for big star biopics, but nothing is more forgiving than a wallop of a leading performance and a story that has long needed to be told. For every mild misstep the film makes, Moon and Cobham-Hervey offer essential corrections. The result is a rousing, often tear-soaked crowdpleaser about a woman deserving of the most affectionate of feature-film treatments.

The film’s first big risk: screenwriter Emma Jensen’s choice to open it long after Helen has embarked on her career. There are no frilly childhood flashbacks or glassy-eyed moments of initial inspiration. Instead, we meet Helen just as she’s about to get the crap kicked out of her and her dreams and any illusions she has about the nature of sexism in the world. It’s 1966 and she’s just won a record contract with Mercury Records in New York City.

Or, more accurately, she’s won an audition for a record contract, and the bigwigs have already seen her audition — taped performances sent without her knowledge — and summarily dismissed her appeal. Too bad, then, that the tenacious Helen has already moved herself and her tiny daughter to New York City for the gig, and if the sneering disrespect of the company men isn’t enough (female singers are boring, is the crux of their disinterest), the casual way they diminish her (in the film’s opening sequence, she’s asked about her husband, her body, and her diet in terrifyingly easy fashion) very nearly is.

But Helen soon has two new allies by her side — Danielle Macdonald as lauded rock journalist Lillian Roxon, who delivers lines like an encyclopedia, cloying until you realize Roxon literally wrote an encyclopedia about rock ‘n’ roll, and Evan Peters as wily manager and love interest Jeff Wald. Their assistance ultimately pushes her to new heights. Reddy’s path to stardom wasn’t easy or smooth, but Cobham-Hervey never leans on cheap drama, instead embodying Helen as an ambitious, driven woman who knew she was meant to be a star because, well, she was.

When Reddy finally hit the big time, complete with multiple chart-topping hits and a Grammy to boot, she remained steadfastly herself. That Grammy? She famously accepted her award with a hell of a sign-off: thanking God last, “because She makes everything possible.” (Moon seamlessly weaves actual footage of the awards ceremony with fresh scenes of Cobham-Hervey in the role; it’s great.) Informed by both her own political views and a changing world, “I Am Woman” makes the clear case that Helen came around at just the right moment, penning her signature song (and eventual feminist anthem) because of how she felt both at home and in the world. Strong, invincible, woman, and shaped by tough breaks.

And, yes, there are tough breaks. Lillian’s cough eventually gives way to both the requisite health scare and a wrenching break between the two pals (there’s a whole other movie about their bond to be made), while Jeff’s obsession with image, money, and nose candy hits a fever pitch once Peters is snorting coke out of his shag carpet as his own kid looks on, sobbing. But, again, Moon pulls back before things get too out of hand and “Behind the Music”-y.

Jensen’s generous script speaks to the emphatic nature of Moon’s film, and while there are plenty of villains — as big as the very idea of sexism, as small as a pink Hoover vacuum cleaner, as close as Jeff, as distant as Phyllis Schlafly — “I Am Woman” attempts to find respect and space for the most human of them. It is, of course, Helen who is the most human, and Cobham-Hervey who is the most sublime.

Every music biopic requires some recreated performances to push the narrative along (and, hopefully, to remind viewers of the raw talent of the star at its center), and Moon’s many sequences of Helen hitting the stage are the highlight of the film. As a nervous Helen prepares to record her first single, Jeff advises her to simply pretend she’s onstage, where she’s at her best, telling her audience a story through her songs. Moon similarly uses the onstage performances for key storytelling, with Cobham-Hervey effectively translating Reddy’s spirit and presence, never fussy, always riveting, startlingly unique.

The current spat of music biopics could use more direction like Moon’s, which understands how much can be telegraphed through the sheer grace of a good performance within an even better performance. And the genre could use more stars like Cobham-Hervey, compelled to not only find the woman within the star, but to give both of them to power to be strong, invincible, and to roar.

“I Am Woman” premiered at the 2019 Toronto International Film Festival in the Special Presentations section. It is currently seeking distribution.

This Article is related to: Film, Reviews and tagged I Am Woman, Reviews, TIFF, Unjoo Moon