Luca Marinelli stars as London's most embittered hero in this spry but frustratingly vague Italian adaptation of a socialist classic. 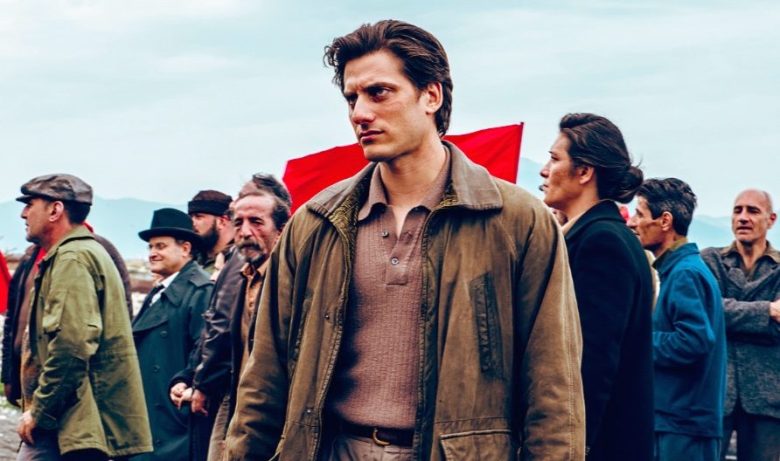 Jack London — an avowed socialist who found himself struggling to reconcile his political ideals with his personal success — intended for “Martin Eden” to be a damning critique of the individualism that spurred his fame. “White Fang” and “The Call of the Wild” had earned the low-born writer an invitation into high society, but he struggled to square the untamed working man he was with the celebrated author he’d suddenly become; still at heart the same person he had always been, London was disgusted to see how differently the ruling class now looked at someone they once despised. What self-serving bullshit! Why should anyone beg for a member of the elite to throw them their own private lifeline when all of the workers could band together and raise everyone to the same level?

And so London scraped out a book about a scruffy wanderer who falls in love with a rich girl, writes his way into her tax bracket, and becomes so disillusioned with society’s arbitrary distinctions that he rejects the potential of socialism and vanishes into his own despair. It was a grim farce disguised as a tragedy — but the disguise was too convincing, and some people failed to see it as a story about the perils of self-interest.

Pietro Marcello’s “Martin Eden,” a dreamy and surprisingly faithful adaptation made with more than 100 years of hindsight, doesn’t bend over backwards to prevent modern audiences from missing the same point. In and of itself, that wouldn’t be much of a problem; London’s novel is all the more powerful because it’s not prescriptive — because it gives readers just enough rope to hang themselves, and sets them all the same traps that Martin himself falls into. Marcello’s film is more explicit in some regards (especially on the subject of education as the most pernicious tool for keeping the poor in check), but this spry yet increasingly bitter romantic drama is so vague and un-targeted that its social critiques feel less defined than ever. The anger is palpable, but its targets are hard to pinpoint.

Still, Marcello never misses an opportunity to emphasize that schools only teach people how to pass society’s meaningless tests. Given how smart Martin is right from the start, it’s a wonder that it takes him so long to pick up on that. Played with bruising pluck by Luca Marinelli (think Jake Gyllenhaal with a lower voice and rougher edges), Martin is a boisterous sailor blinded by his own ambition. And by the beauty of Elena Orsini (Jessica Cressy, whose piercing blue eyes bestow her character with a perfect ambivalence), the hyper-bourgeois girl whose brother our street-smart hero saves from a beating.

They form an instant and mutual crush, but it’s clear that he’s too uncouth to be an acceptable match. He has bad grammar. His vocabulary is limited. He’s never read a word of Baudelaire. If only a man like that could get an education —  if only he could learn the names of some ancient kings — then the world would be his oyster. Martin’s first conversation with Elena tells us everything we need to know about what he has to learn: Standing in front of a murky portrait, he comments that it “looks beautiful from afar, but up close you can only see stains.”

If only Martin actually listened to himself speak. He feels empowered by what Elena inspires him to learn, some of which is helpful (people are often held down because they lack the language to express themselves), and some of which is not. He doesn’t see himself like a dog jumping through hoops in order to be rewarded with a treat; he doesn’t realize — to quote a furious line from the end of the film — that “culture and education have nothing to do with each other.”

The first hour of “Martin Eden” flows with the erratic jazziness of a French New Wave film; its hero is searching for something, and he doesn’t quite know where he might find it. Martin works some hard labor, he squats in his sister’s place, he moves in with a peasant family in the countryside and writes long letters to Elena. It’s probably the most settled he’s ever been, though the sandpaper textures of Alessandro Abate and Francesco Di Giacomo’s 16mm cinematography make everything about Martin’s circumstances feel unrefined and subject to change. He’s a likable guy —  Marinelli’s performance radiates with raw charisma — and seems to innately attract the love and attention he can only see above him. After one particularly charming episode at a fancy party, Martin even befriends an influential socialist named Russ Brissenden (Carlo Cecchi), who tries to bring him into the cause.

That doesn’t go very well, but the haziness of the film’s setting makes it difficult to determine why. London’s novel was set in turn of the century Oakland, but Marcello’s film relocates the story to a chronologically slippery Naples that doesn’t belong to any particular time. The technology belongs to the ’50s, the fashion cheats a bit closer towards the ’30s or ’70s (depending on the scene), and the political landscape feels like a hot stew of the various strifes that have percolated among the working class since Karl Marx. Every mention of impending war feels like a clue, until we realize that the war isn’t a real one.

Unmoored from recognizable history, “Martin Eden” sloshes forward in such a way that we lose track of the title character long before he loses track of himself. An abrupt time jump at the start of the third act teleports Martin into high society, and that disorienting leap clearly articulates his struggle to reconcile who he was with who he is now. They’re ostensibly meant to be the same man — it’s society’s view of him that’s changed — but our view of him has changed as well. We’ve lost sight of Martin for too long to fully appreciate the particular metamorphosis that’s taken place, and Marinelli’s full-bore transformation into a lit punk Daniel Plainview severs any discernible tie to who he used to be.

The disconnect is obvious, but the destruction that erupts from it better reflects an empty self-loathing than it does any broader social condition, and Martin’s disgust resolves as shapeless and unmoving. Individualism is harder to dismantle without a clear individual through whom to process it. For all the vim and vigor of Marcello’s film, “Martin Eden” feels more uncertain than ever.

“Martin Eden” premiered at the 2019 Venice International Film Festival. It is currently looking for U.S. distribution.

This Article is related to: Film, Reviews and tagged Martin Eden, Reviews, Venice