Produced by the Russo brothers, Matthew Michael Carnahan's pulse-pounding film about an Iraqi SWAT team is visceral but frustratingly vague. 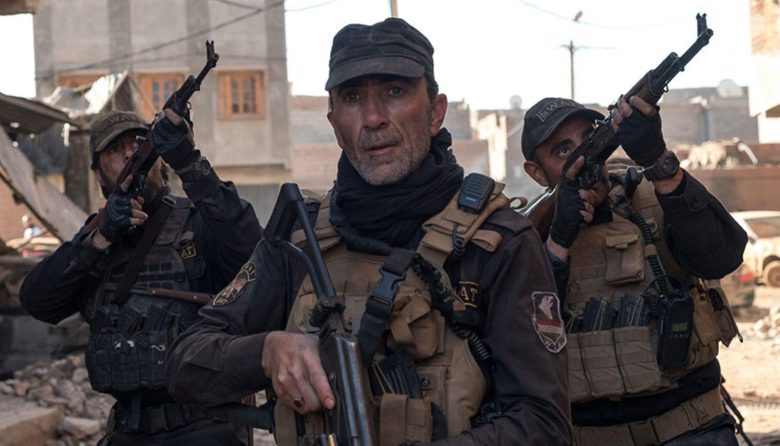 It’s often said that specificity is the key to making something feel universal. It’s much less often said that universality is the key to making something feel specific. Matthew Michael Carnahan’s intense, relentless, and undeniably visceral “Mosul” — which takes both of these approaches at the same time as if trying to flank the truth from each side — provides all the evidence you’d ever need as to why that might be the case.

A true enough story inspired by Luke Mogelson’s 2017 New Yorker article “The Desperate Battle to Destroy ISIS,” “Mosul” is essentially a nerve-shredding, nightmare-inducing, your-ears-will-never-stop-ringing action movie about a renegade Iraqi police unit who disobey orders and push towards the heart of darkness in order to save what’s left of their beloved home city. It is, so far as this critic can tell, the most accurate dramatization of an anti-ISIS street fight that has ever been committed to the screen.

Explosive action scenes bleed into eerily banal moments of calm, which then erupt back into violence when a car bomb fires shrapnel into the room. The characters who don’t get many lines of dialogue or distinguishing features tend to die. The ones who are afforded more substantial backstories tend to kill a few bad guys, shed a few anguished tears, and then die. There’s a mysterious, weathered commander who looks like a lion and leads the team with pride. There’s a fresh-faced new recruit named Kawa (Adam Bessa), who shakes like a leaf at the beginning, and fights like Rambo at the end. There are ambushes and RPGs and a dozen very distressing shots of young kids just trying to grow up in the middle of a warzone. It’s “Black Hawk Down,” but the heroes aren’t white.

The creative team, on the other hand, is a slightly different matter. But Carnahan, making his directorial debut after writing a handful of similarly explosive films like “The Kingdom” and “Deepwater Horizon,” saw this as a chance to honor the brave men of the Nineveh SWAT Team with a bit of hoo-rah American movie heroism. He endeavored — despite his own background, and with the full support and financial backing of producers Anthony and Joe Russo — to tell this story with a primacy that Hollywood has almost never afforded Middle Eastern soldiers. To portray them the same way that Peter Berg might portray Mark Wahlberg. And, to Carnahan’s credit, that’s exactly what he did. 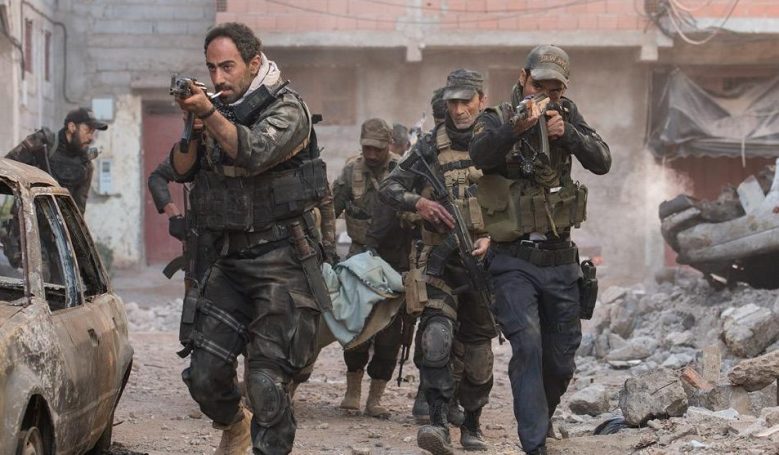 “Mosul” might simply reskin a zillion old tropes, but it does so with immaculate attention to detail. The excellent cast, pulled from the Middle East and North Africa and the displaced Iraqi diaspora, all learned how to speak the specific Arabic dialect that the Nineveh SWAT Team spoke on their raids. “Lord of the Rings” production designer Phil Ivey was hired to make the Morrocco locations match the Mosul look they were trying to convey, and you can feel the broken soul of a city in his sets.

And the spartan script, which unfolds over the course of something like 12 hours as Commander Jasem (Suhail Dabbach) and his squad snake their way towards their unspecified objective, is peppered with ineffably human elements that cut through the noise. Some of these grace notes, such as the bit where one of Jasem’s men wins a firefight against a few ISIS goons and then sighs “God, I hate guns,” feel a bit labored. Others, like the moment in which the film wordlessly appraises the awful dynamic between a Daesh lackey and the family he forced his way into, capture the medieval savagery that swept over Mosul like a plague.

Henry Jackman’s score, which alternates between crashes and wails, might sound more inspired by American movies about the Middle East than it does the Middle East itself, but Mauro Fiore’s you-are-there cinematography manages to embed viewers inside the chaos without making the violence look cool. The opening shootout — a massacre in a bombed out cafe — lucidly conveys the ruined space without “choreographing” the bloodshed. The climactic skirmish is so ugly and scattered that you just want it to be over, and it ends with a death so so ignoble that it varnishes the entire mission with the emptiness of ISIS’ death cult ideology. There’s no god here, not by any name, and precious few moments of “Mosul” leave the aftertaste of a recruitment film. It may be hard to grieve for the movie’s basic and interchangeable heroes when they die (grief being a luxury that Jasem’s men don’t have time for), but Carnahan doesn’t try to make you cheer when bad guys meet the same fate. Nobody on the Nineveh SWAT Team wants to be there.

And yet, the “there” of it all doesn’t matter as much as it should because the movie’s heroes are so basic and interchangeable. “Mosul” is determined to present the most vivid possible depiction of the brave Iraqis who drove the barbarians out of their city, but it’s hamstrung by a co-equal (if considerably more suspect) intention of making American viewers identify with these men. Whether because he lacks faith in his script, or because he lacks faith in his target audience, Carnahan doesn’t seem to have trusted that the people back home — people who may have only really seen Iraq on CNN and Fox News — would naturally be able to appreciate the distinction between good Iraqis and bad. He seems to have feared that people don’t watch an action film with the same empathy and understanding with which they read an article, and that something about the indivisible bedrock of bravery and desperation that drives the Nineveh SWAT Team was liable to get lost in translation (even if they all spoke in Arabic).

All of the characters fall into familiar Western archetypes, and even their quieter moments are distressingly committed to humanizing them in a way that American viewers might appreciate. They watch a Kuwaiti soap opera during a lull in the action, and exchange steroidal one-liners as if they’re consciously trying to prove that brown people can sell Michael Bay dialogue. On their own, such overt attempts to connect with audiences weaned on “The Hurt Locker” are benign, but “Mosul” hardly ever balances them out with flourishes that feel unique to the people on the Nineveh SWAT Team. If Carnahan mercifully avoids cheap Muslim stereotypes, he only manages to do so by avoiding virtually everything else as well.

As a result, his film’s extreme verisimilitude is diluted by a deeper sense of vagueness. Even the Nineveh mission is shrouded in secrecy; not because it’s top-secret or irrelevant, but rather because “Mosul” is too streamlined to play its only card before the climax. After a long string of crude intertitles at the start of the movie, “Mosul” largely eschews any sort of personal or sociopolitical context. It’s dusty, and things are bad. At one point towards the beginning, someone optimistically alludes to the fact that the police are bothering to arrest people again, and the rest of the movie coasts on that plain desire for lawfulness and normalcy.

The case could be made that war is always the same at heart; that context isn’t relevant to someone in a firefight. But Carnahan’s unnecessary insistence that these men are just like “us” deprives them of the chance to be anyone else. And for all of his film’s admirable and exacting specificity, it doesn’t really matter where “Mosul” takes place.

This Article is related to: Film, Reviews and tagged Anthony and Joe Russo, Mosul, Reviews, Venice