The actress plays a clever single mom in Showtime's '90s-set satire about a pyramid scheme. 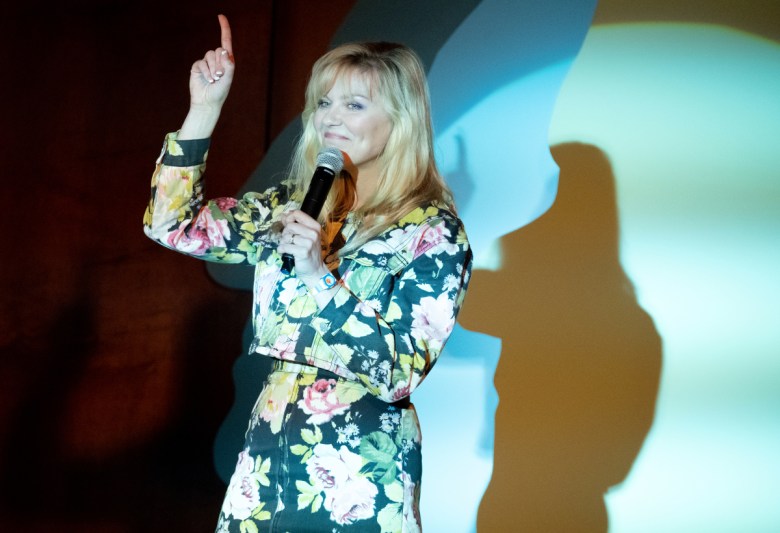 [Editor’s Note: The following contains spoilers from “On Becoming a God in Central Florida” Episode 3, “A Positive Spin!”]

The chant of the FAM pyramid scheme crowd washes over Krystal Stubbs (Kirsten Dunst), signaling a change of heart for the single mother and recent widow on Sunday night’s episode of Showtime’s “On Becoming a God in Central Florida.” Krystal has been looking at hard times after the death of her husband Travis (Alexander Skarsgård), who had gone into debt trying to achieve the American dream through FAM, but not confiding in his wife about their financial straits.

“I think that for Krystal, she didn’t know but was like, ‘OK, you can go with this,’ because it stops him from drinking. ‘Tut the one caveat is you can’t quit your real job,'” Dunst told IndieWire. “She thinks FAM is weird but it’s helped him in a way. And in her terms, they’re still living in their house and they’re still fine. She doesn’t know behind the scenes all the money that he’s invested behind her back, the second mortgage on their house, all those things. Not until later.”

Although Travis didn’t leave any for his wife and their newborn daughter Destinee, Krystal did inherit his position in FAM, which she at first tries to ignore but is convinced to continue by her “upline” Cody Bonar (Théodore Pellerin). When she asks to address the FAM rally, she could have used the opportunity for revenge to expose the evils of FAM. Instead, Krystal puts a positive spin on her husband’s death and recruits people to her Splashercize class at Rebel Rapids water park.

Although Krystal has now appeared to embrace the FAM spiel, co-creators Robert Funke and Matt Lutsky reveal that she was originally written to a far more vengeance-driven agenda. 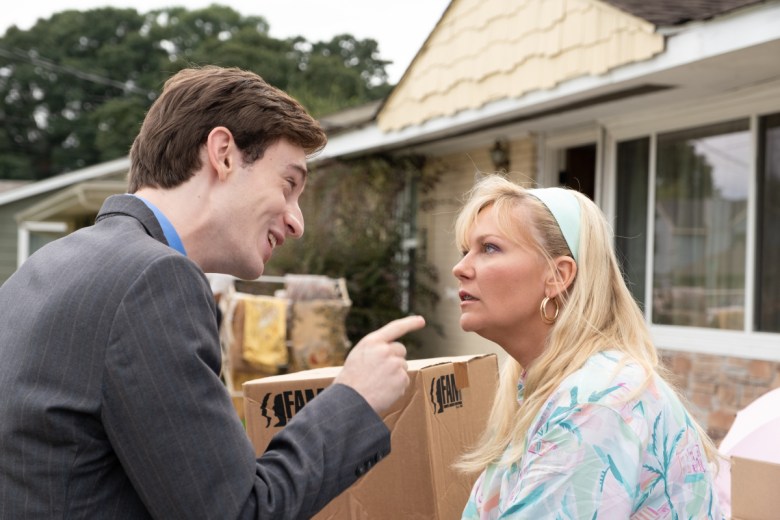 Théodore Pellerin and Kirsten Dunst, “On Becoming a God in Central Florida”

“I think when we really first wrote the pilot script, before anybody had read it, we looked at Krystal as kind of a cold-eyed killer. We saw her as somebody who people would underestimate and she could just knife anyone,” said Funke.

“And the more that we worked with Kirsten [who’s also an executive producer]… and the more that we looked at the story, we started to see that there’s a story here about a woman who has the analytical mind to recognize power structures and when she’s being played and how to play other people,” he continued. “But also looking at her circumstances and treating it less as like a vendetta that she has or a game and more trying to stay alive like anybody else. I think the more we realize the layers and warmth and humanity that character could have, the better she became.”

Lutsky added, “Kirsten brought a vulnerability and a pain and a hope to the character that really exceeded everything that we were trying to do with it ourselves. She found the real person in there, thrown into these circumstances rather than just the character.”

Krystal’s minimum wage job isn’t going to cut it now that she’s a single mom. The former beauty queen begins to realize that she can read people, manipulate them, and possibly succeed where Travis couldn’t in his naive approach to FAM. Showrunner Esta Spalding (“Masters of Sex”) notes that Krystal’s mindset as a provider is the key to her more realistic and strategic approach.

“I was raised by a single mom. We lived on food stamps,” said Spalding. “That was why the script appealed to me. Getting to tell the story of a woman who is doing everything she can for her child, but is wily and smart, creative and has the soul of an artist in a way was exciting to me. I channeled a lot of my own experience of my mom, thinking about Krystal.”

“Krystal probably would’ve just done her own thing, found a new man, whatever her way of surviving would’ve been,” said Dunst. “But she definitely wouldn’t be in such a desperate situation if she didn’t have the kid.”

Dunst herself became a first-time mother in 2018, and began shooting the series shortly after. This gave her a better awareness of how Krystal should act, and often spoke up to make sure that Destinee’s child care was addressed in some way.

“You can’t just forget about the baby. Sometimes it’s annoying because I’m carrying this heavy thing with a fake baby in it, but you can’t leave her behind. That’s the whole drive of the show for her is providing for her and her daughter,” said Dunst. “And I always thought about ‘Raising Arizona’ and how well they used the baby because you should use it for comedy.” 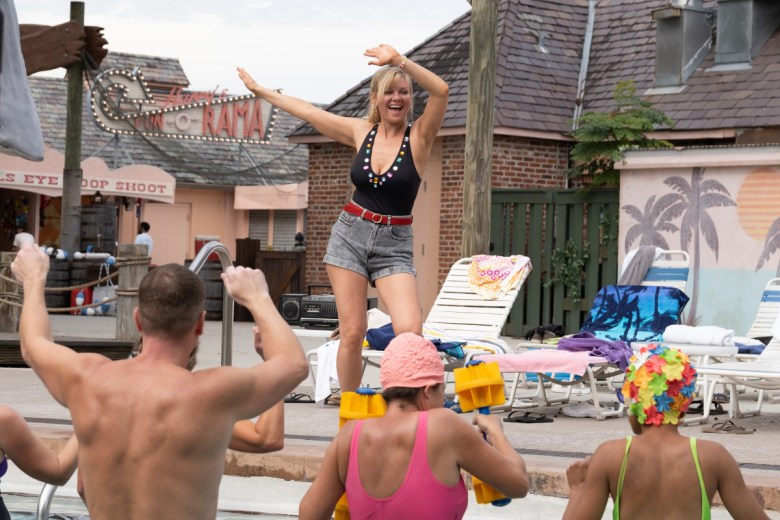 Krystal’s choice to stick with the FAM system unfortunately requires her to recruit one of her closest friends, Ernie (Mel Rodriguez). Although Travis had tried repeatedly to draw him into the FAM scheme, he was content with his lot in life and was never tempted. Somehow, Krystal identifies what Ernie was missing and invites him and his son to take part in her Splashercize class along with the other FAM members.

By the end of the episode, Ernie tells Krystal, “When Harold and I were in that pool together? Splish-splash I was having a blast. I don’t know about FAM, OK, but I did know how I felt when i was in there. I felt surrounded by love and positivity, by a family, like a warm blanket. That’s what I’ve been missing. That’s what everyone needs. I want in. I want to be part of the FAM.”

Despite Krystal’s personal hardships with FAM, she still doesn’t see the dangers of recruiting such a gentle soul as Ernie into the company. “I think she’s desperate and she doesn’t know how bad it is,” said Dunst. “She knows it’s crazy, but I honestly think she’s so desperate because she doesn’t know how evil it can get. So for her, signing Ernie is out of desperation and survival for her and her daughter.”

Ernie’s need for emotional comfort and Krystal’s need for survival for her family have both drawn them to FAM’s false promises. But FAM will change them and their respective needs as the season goes on.

“We had a pyramid up on the board in the writer’s room that was Maslow’s Hierarchy of Needs, from ‘survival’ to ‘belonging’ to the things that human beings need to be able to self-actualize,” said Spalding. “And as we talked about Krystal’s moving up that pyramid and getting away from just survival, she’s having to decide whether to self-actualize as a true person or whether to self-actualize in the wealth of FAM to take the money and not be true to herself.

“Ernie is not in the land of survival,” she added. “When he starts, it’s all for him about belonging, and feeling some kind of esteem. And Ernie’s character slides down the pyramid. He starts in a way that’s pretty self-actualized and you watch him, he’s got this sadness and that’s what FAM preys on.” 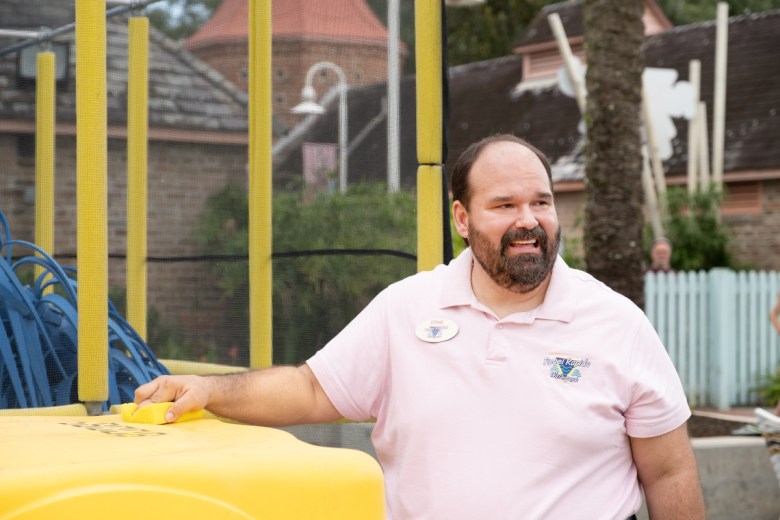 Mel Rodriguez, “On Becoming a God in Central Florida”

That’s grim stuff for a series that often dips into comedy to depict the outrageousness of the world of pyramid schemes, and it’s a carefully wrought balance.

“We wanted every character to have a truth and reality to them, their pain, their dreams, their hopes, all that stuff to be very true in a dramatic way. And we wanted all the surrounding of that to be comical and surreal, particularly FAM and the scheme of FAM,” said Spalding. “So the balance between a truth as the true sadness and a pathos for our characters — but also a total hilarity and wildness to the scheme that they’re in – was the balance we had to strike. To me, the perfect scene in the show tonally is when you see in Episode 2, Krystal holding that giant check and it’s super sad and moving after Travis’ death, but it’s also ridiculous and funny.”

“On Becoming a God in Central Florida” airs Sundays at 10 p.m. ET on Showtime.

This Article is related to: Television and tagged Kirsten Dunst, On Becoming a God in Central Florida, Showtime, TV Interviews