TIFF: Marjane Satrapi's portrait of the renowned chemist and physicist is imperfect, but captures the spirit of its subject. 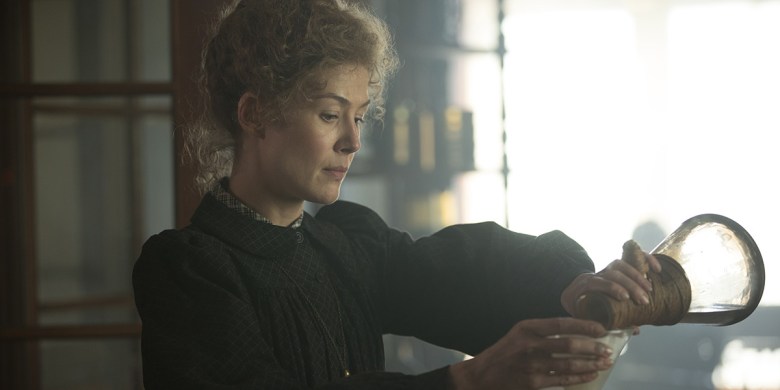 Rosamund Pike has a penchant for playing determined women navigating oppressive male-dominated environments, from the femme fatale of “Gone Girl” to war photographer Marie Colvin in last year’s “A Private War.” In the latest example, “Radioactive,” Pike delivers a powerful embodiment of another tragic hero named Marie. As pioneering physicist and chemist Marie Curie, Pike delivers a dazzling performance rich with the struggles of a life defined by perilous discoveries and great personal loss. As directed by Marjane Satrapi, this discursive biopic struggles whenever it cuts away from her drama to explore the bigger picture — with peculiar flash-forwards to a nuclear future — but Pike helps fuse it together.

“Radioactive” sets out to achieve many things at once. It begins as a stodgy period piece, tracking Polish immigrant Maria Sklodowska to Paris in the 1890s, where the medical student is evicted from her lab for using its instruments for eccentric experiments with uranium. However, once she finds an essential partner in crime with Pierre Curie (an understated Sam Riley), she begins to cultivate groundbreaking research that culminates with the discovery of radium and polonium. That’s when Satrapi, whose animated version of her graphic novel “Persepolis” kicked off an idiosyncratic filmmaking career, begins to transcend the familiar biopic beats.

Psychedelic animations reveal the explosive properties of atoms at the root of the would-be couple’s research, and their achievements catapult them to global fame. At the same time, Pierre makes his moves on the reticent Marie, who falls for his charm and their unique synergy in the laboratory. Satrapi’s most striking visual conceit finds the couple making love as their shadows climb the walls and merge with stars; merging the energy of their chemical advancements with the intimate nature of their bond, Satrapi dares to make science look sexy.

Unfortunately, the movie’s unorthodox structure stumbles when it veers off on heavy-handed tangents to explain the reverberations of the Curies’ research. Pierre’s Nobel Prize speech carries plenty of drama on its own — the dangers of the discovery that he formulates don’t need a blatant cutaway to Hiroshima to make his point resonate (despite the expressionistic, high-contrast visuals that give the sequence an almost painterly intensity). And they interrupt the more personal conundrum shoehorned into the situation as Marie contends with the Nobel committee’s reticence to acknowledge her contributions to the research.

Other distracting cutaways range from snippets of the Chernobyl disaster (which suffers from comparison to the more intense recreations on the HBO miniseries) and the impact of radioactivity on cancer research. “Radioactive” has been adapted from Lauren Reniss’ graphic novel, and it’s possible that these sort of audacious leaps work better on the page; in the context of this narrative, however, they drive a wedge in the story and reek of didactic overstatement. Jack Thorne’s uneven script does the movie no favors — characters often speak as if aware of their roles in history (“This could change science forever!”), and Satrapi’s dour tone means the weighty proclamations often venture into cheesy territory.

Nevertheless, cinematographer Anthony Dodd Mantle’s brilliant neon imagery echoes the otherworldly nature of Marie’s discoveries, and provides an eloquent window into her headspace. Pike is never less than convincing as she works her way through the backlash to her research and fame, the public outrage over her love affair with a former student, and how she contends with motherhood after a debilitating loss. Phillip Glass’ “Metamorphosis” may be a cinematic cliché, but when it’s combined with Pike’s face as she wakes up for an expressionistic nightmare, the character’s psychological turmoil comes to vivid life.

Pike remains a compelling figure into old age, watching her daughter (Ana Taylor Joy in a fleeting but effective turn) venture into her own successful career as a scientist, and following her onto WWI battlefields with mobile x-ray units that save lives. Anyone unfamiliar with the Curie family legacy will certainly find much to appreciate about their various accomplishments under incredible personal duress and tremendous social upheaval. The movie’s tearjerker of a finale allows the intimate portrait to land on steady ground, saluting Marie Curie’s significance while acknowledging the melancholic nature of her life. “Radioactive” only manages to achieve this power in fits and starts, exploring a range of storytelling devices as if enmeshed in a laboratory of its own. It doesn’t always work, but at least Satrapi’s willingness to experiment captures the radiant spirit of the daring subject at its center.

“Radioactive” premieres as the closing night selection at the 2019 Toronto International Film Festival. Amazon Studios will release it next year.