The actress found herself in the crosshairs of social media backlash, after it was revealed she purportedly plays a "white Ethiopian Muslim." 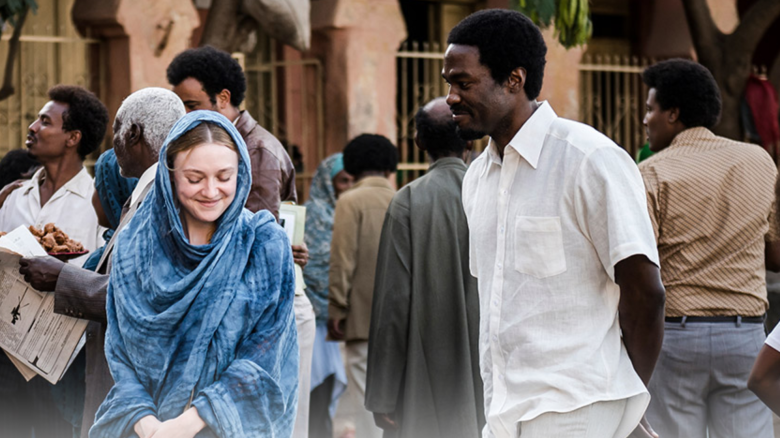 “Sweetness in the Belly”

Actress Dakota Fanning found herself in the crosshairs of social media backlash last week, after Twitter learned about her new film, “Sweetness in the Belly,” in which she purportedly plays a “white Ethiopian Muslim.”

‘Sweetness In The Belly’: First Clip Of Dakota Fanning As A White Ethiopian Muslim In Refugee Drama-Romance – Toronto https://t.co/L8ZPRnTIfu pic.twitter.com/8eFCBiv9IQ

Reactions to the clip and social media post included attacks against Fanning, a nebulous Hollywood machine behind the film, and the filmmaker, who many assumed is white.

Of course, in clickbait culture — where headlines alone drive the narrative around issues — few actually read the articles announcing the project. But even a cursory glance would have informed the average flamethrower regarding a number of key facts:

1.) #FactCheck: Lots of comments about this being a Hollywood thing. It’s not. It’s an Irish/British/Canadian co-production. It’s also based on a book. And the filmmaker is Ethiopian not white. His last film was a sensitive portrait of an Ethiopian girl’s trauma titled “Difret.” https://t.co/A4c23DmAn6

2.) To be clear, this isn’t to suggest that this makes a huge difference (although it shifts the conversation), but we should at least have our facts right, so that we know exactly what we’re fighting against. That is all…

Consequently, much of the outrage against the film and Fanning is ill-informed and not justified.

That said, there’s certainly a broader discussion to be had about the dearth of films of this caliber that tell stories about Ethiopians, especially those that have currency in the international marketplace. And subsequently, a conversation about what kinds of films about “Africa” are often financed by the so-called “West,” and who gets to direct those films, is also very worthy.

But rather than speculate on the filmmaker’s intentions and motivations, IndieWire contacted Mehari, as well as the film’s producers (Sienna Films), to talk about the film and the controversy around it.

“I’m Ethiopian and Ethiopia was at the heart of the story,” director Mehari said about what drew him to the project. He left Ethiopia as a teenager, and has lived in the USA for over 20 years. “The script was brought to me by one of the producers while I was showing ‘Difret’ in Berlin in 2014. It hit close to home on so many levels. It is about unpacking what home means across all its dimensions and showing how communities heal after they have been ripped apart.”

“Difret” was Mehari’s feature film debut. The film, which told the true story of an Ethiopian girl who stands trial for killing the man who abducted and raped her, had its premiere in-competition at the 2014 Sundance Film Festival where it won the World Cinematic Dramatic Audience Award. Angelina Jolie would come on board as executive producer, and the film was later selected as the Ethiopian entry for the Best Foreign Language Film at the 87th Academy Awards, although it was not nominated.

On the character that Fanning plays in the film, Mehari said: “Dakota plays the role of a reserved outsider and in so doing depicts a different way of being in the world that is rooted in stillness and self-reflections — two qualities that are in far short supply today.”

Regarding the controversy that erupted on September 4 (even becoming a trending Twitter topic), Mehari didn’t expect it. “Someone mischaracterized the story which was quickly corrected. However all of the issues that are being discussed around the film are important issues and hopefully the film will add to that conversation. I thought the book was beautifully written and was excited to have a chance to adapt it to the screen.”

The filmmaker emphasizes that he does have other projects in development, including two TV dramas for Ethiopian television, as well as a film about an Ethiopian war hero who fought during the Italian war. Although he was mum on specifics, Mehari is clearly committed to spotlighting an Ethiopian narrative.

Additionally, Julia Sereny of Sienna Films, a producer on “Sweetness in the Belly,” shared the following statement with IndieWire:

The film raises many questions about belonging, identity and nationhood. Are these things which define us determined by how we see ourselves or how others need to label us? Is nationality something we inherit through our parentage, or do we define it through our own experience? Dakota Fanning plays a young woman who was orphaned by her British parents in and African country, subsequently raised in the country and we meet her shortly after she flees from pending war, to London, her so called ‘home,’ where she had never yet been. She befriends a refugee from Ethiopia, played by Wunmi Mosaku, and they form a beautiful friendship where they ultimately help one another move forward. This is a film which we hope will encourage conversation about some of the critical issues of our time.

“Sweetness in the Belly” makes its world premiere at TIFF, in the evening of Saturday, September 7th. In addition to Fanning, it co-stars Wunmi Mosaku, Kunal Nayyar, and Yahya Abdul-Mateen II. The festival calls the film a “graceful” translation of author Camilla Gibb’s novel, and an “emotionally rich cinematic experience” that “speaks pointedly to our present refugee crisis.” The film does not yet have distribution.

This Article is related to: Film and tagged Dakota Fanning, Sweetness in the Belly, TIFF, Zeresenay Berhane Mehari