Bill Hader, Andy Samberg, and Awkwafina are just a few of the famous names who helped bring the puppets to life in Netflix's fantasy series. 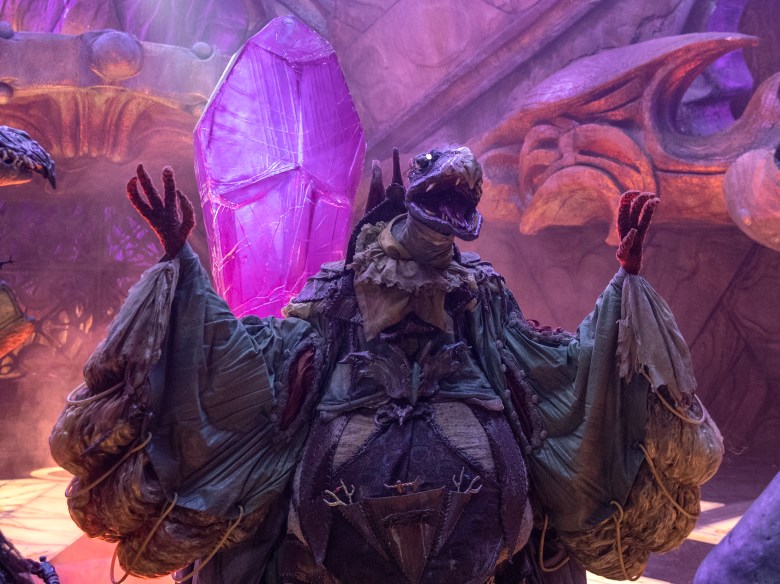 As a prequel series to “The Dark Crystal,” Netflix’s “Age of Resistance” takes place long before the majority of the Gelfling population disappeared and features seven divided Gelfling clans on Thra who are under Skeksis rule. But when the Skeksis’ horrifying secret is discovered and its effects on the planet of Thra, the Gelflings must unite to fight back against the evil overlords.

Although it takes multiple people to bring just one character to life – from the writers and puppet designers to the puppeteers who also do the initial voice performance as a guide – a slew of celebrities were also lured by the song of Thra to lend their voices. Sigourney Weaver, however, is the one big name who was never seen on screen, in puppet form or otherwise, as the voice of the narrating Myth Speaker.

Take a look below to see whose voice you may or may not have recognized: 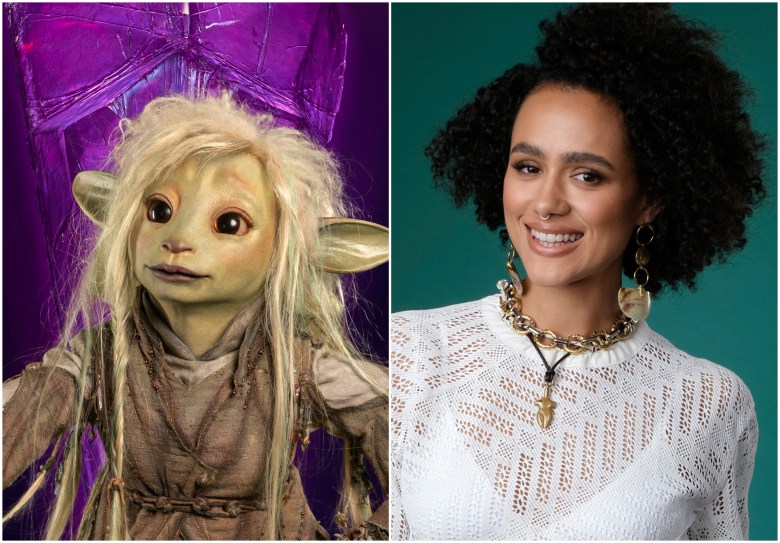 Playing the gentle Grotton cave dweller, Emmanuel is best known as Missandei on “Game of Thrones” and Ramsey from the “Fast and the Furious” franchise. She can also currently be seen in Hulu’s “Four Weddings and a Funeral.” 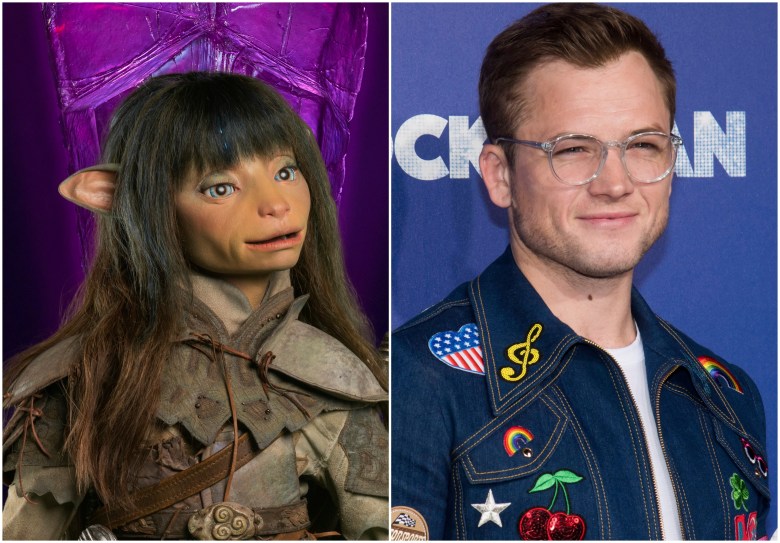 Before playing the heroic castle guard-turned-resistance fighter, Egerton also saved the world as Eggsy in the “Kingsman” films and starred in the Elton John biopic “Rocketman.” 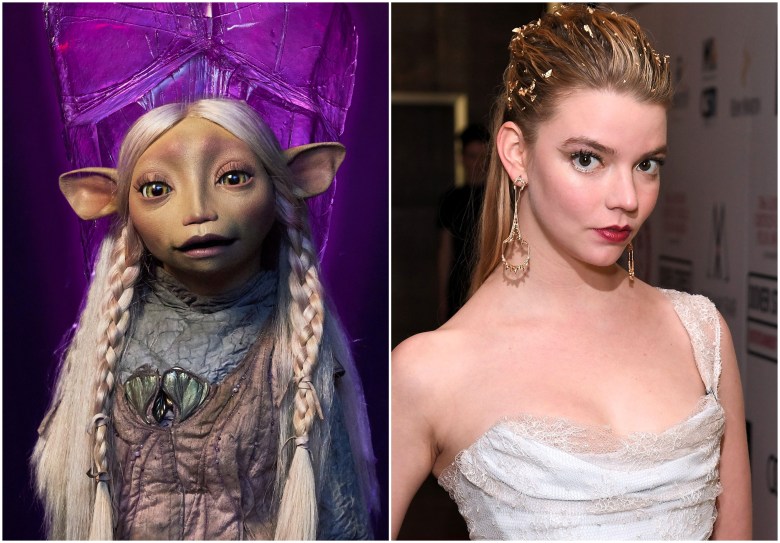 “The Witch” and “Split” star plays Brea, the youngest and most scholarly of the daughters of the All-Maudra. 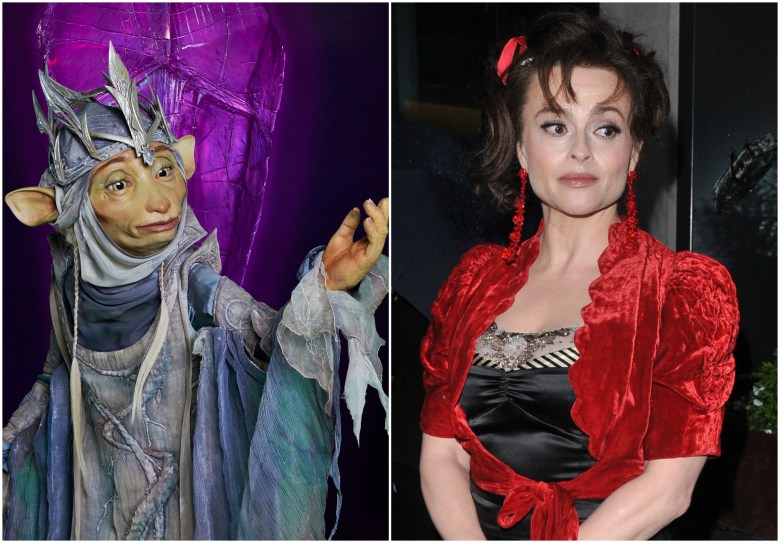 The veteran actress is no stranger to playing powerful women in fantasy projects ranging from Bellatrix Lestrange in the “Harry Potter” franchise to the Red Queen in “Alice in Wonderland.” She’ll also be seen as Princess Margaret on Netflix’s “The Crown.” 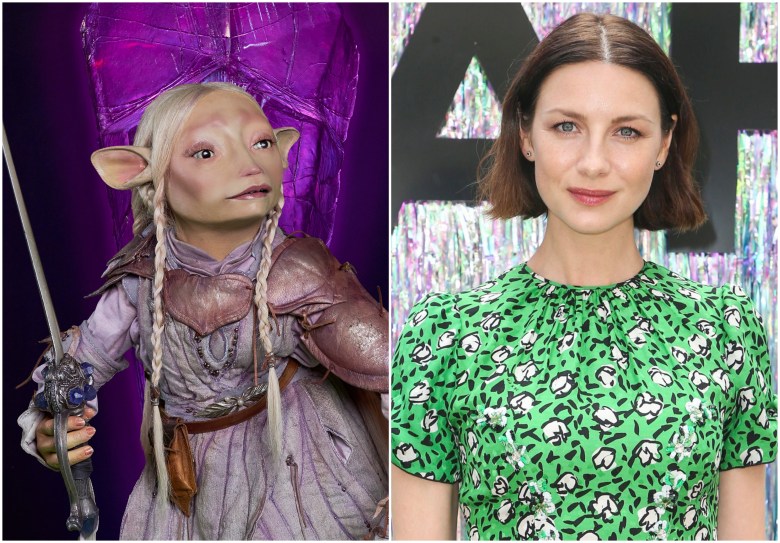 The “Outlander” star takes up a sword as a brave paladin and the middle daughter of the All-Maudra. 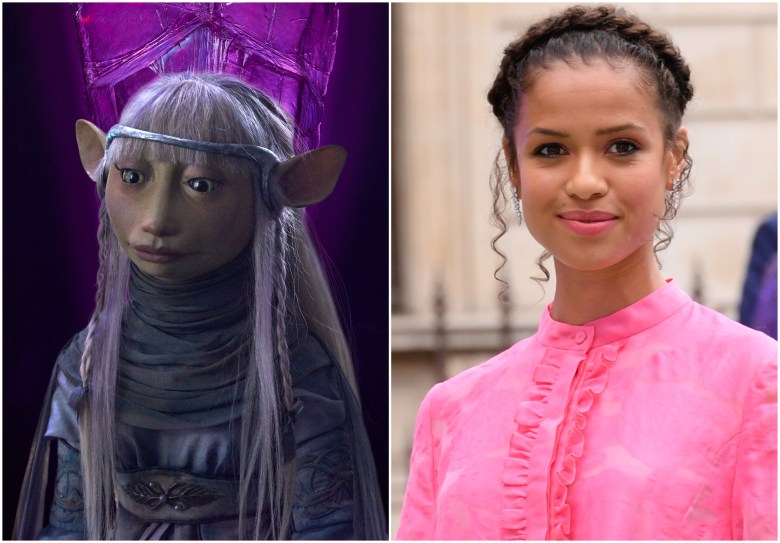 The “Belle” and “Black Mirror” actress plays the All-Maudra’s eldest daughter who is the most taken in by the Skeksis’ lies. 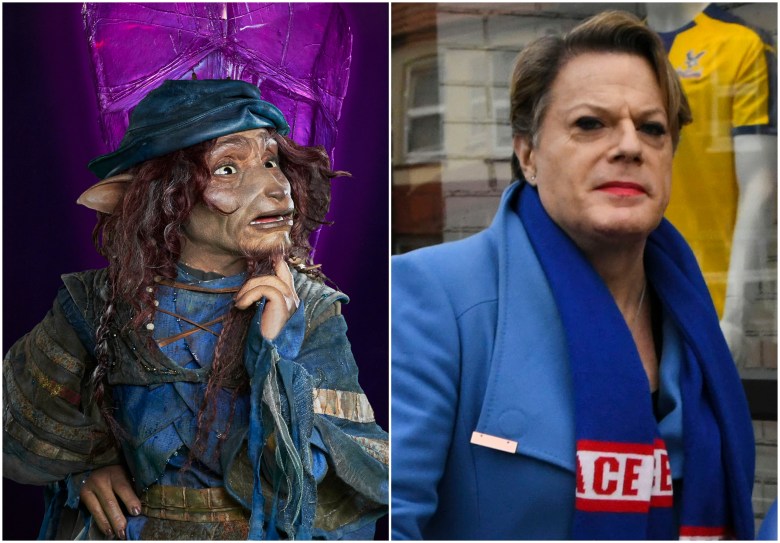 The actor and standup comedian plays the wise Sifa elder who isn’t too keen with Brea’s questions. 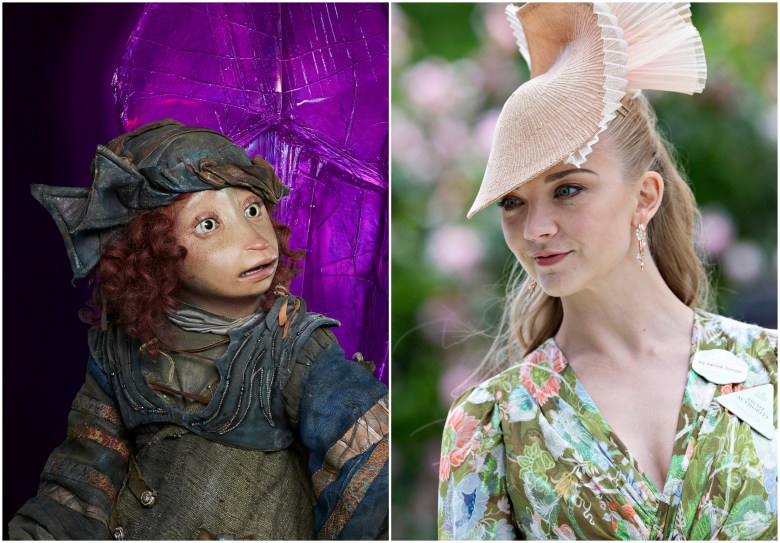 The “Game of Thrones” and “The Tudors” actress plays Onica, the assistant to Cadia who’s more than ready to rise in the ranks. 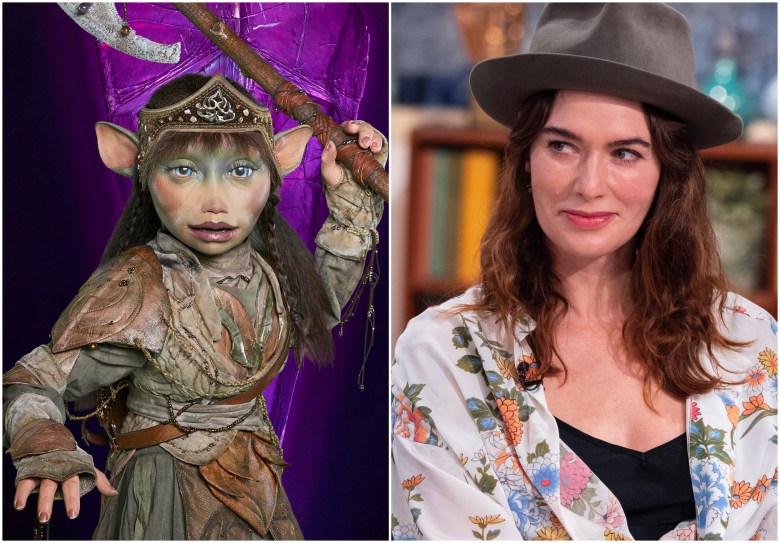 Yet another “Game of Thrones” alum, Headey plays the leader of the Stonewood Clan who joins Rian in battle against the Skeksis. 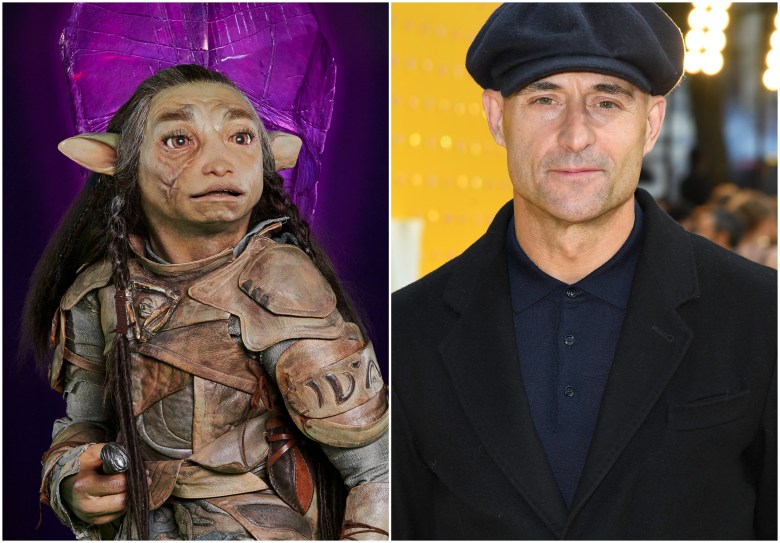 “The Imitation Game” and “Kingsman” actor plays Ordon, the father of Rian and captain of the guard at the Crystal Castle. 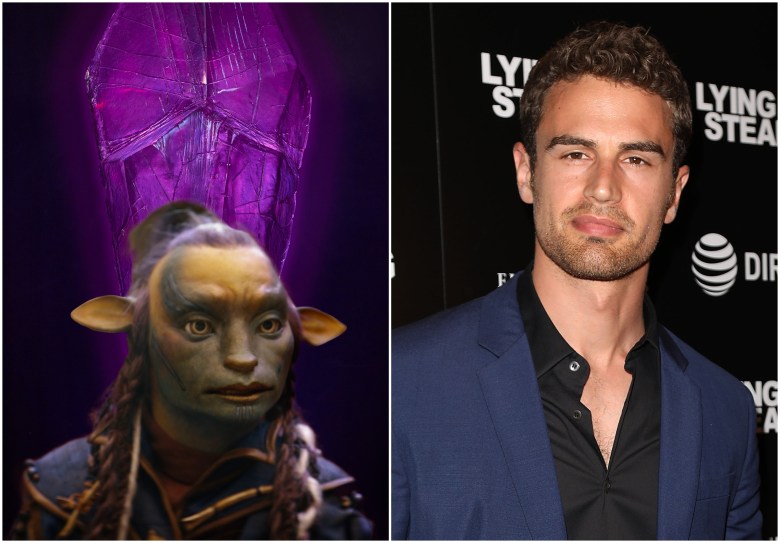 Before playing the rakish Dousan leader who comes to the aid of Brea and friends, James is best known as Four in the “Divergent” films and the late Kemal Pamuk from “Downton Abbey.” He’ll also star in PBS’ upcoming series based on Jane Austen’s unfinished novel, “Sanditon.” 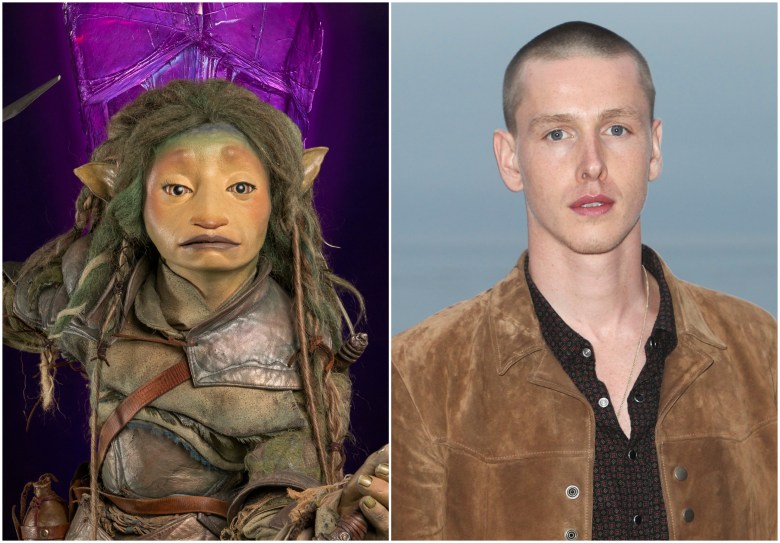 Dickinson most recently played the kidnapped heir of the Getty oil fortune in the FX series “Trust.” Here, he plays castle guard Gurjin, one of the Drenchen clan and best friend of Rian. 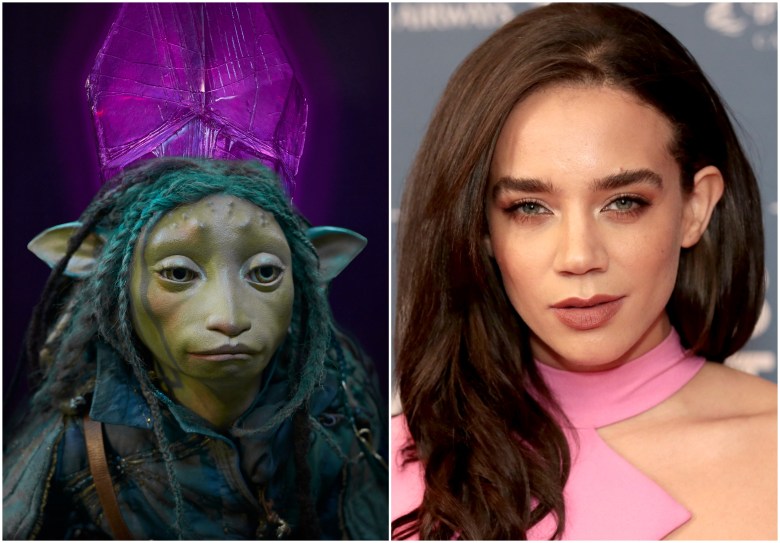 The actress is best known for portraying Dutch from Syfy’s “Killjoys” and most recently played Ava in “Ant-Man and the Wasp.” Here she plays Naia, the twin sister of Gurjin. 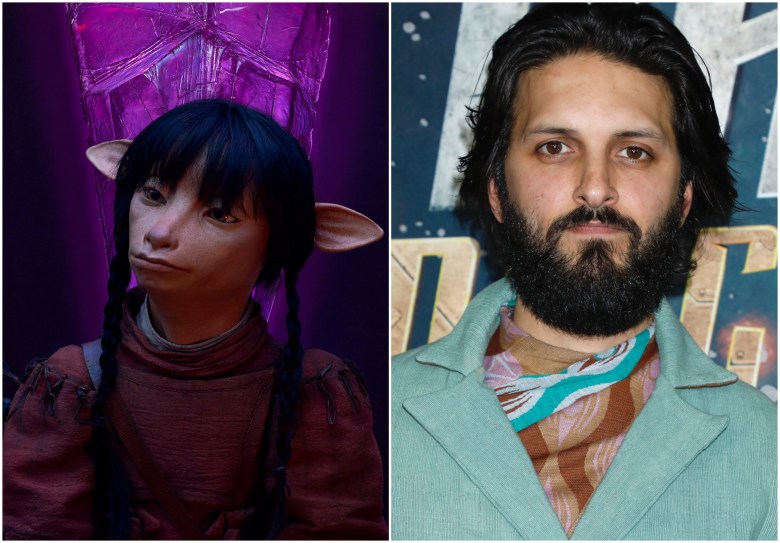 Latif, best known for playing Ash Tyler on “Star Trek: Discovery,” portrays one of the Spriton clan, a song teller who helped Brea and Rian share their memories and mourn.

The Librarian, voiced by Toby Jones 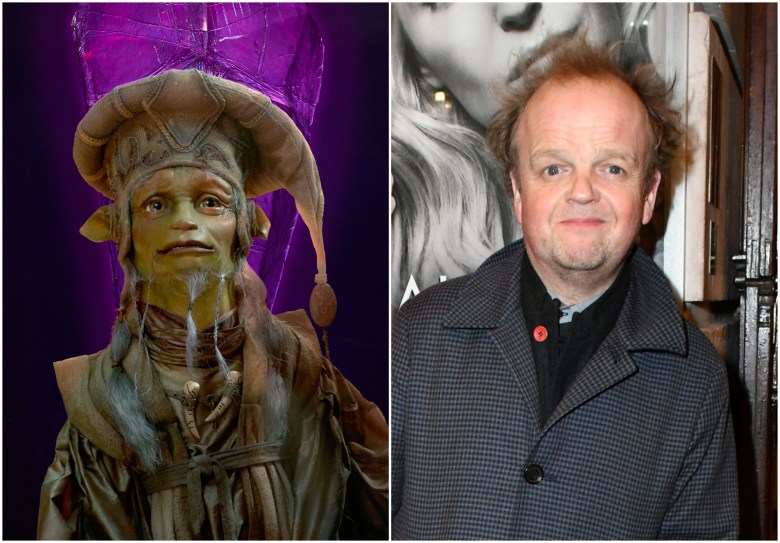 “The Detectorists” and “Tinker Tailor Soldier Spy” actor plays the Vapra librarian who must deal with Brea’s inquisitive ways. 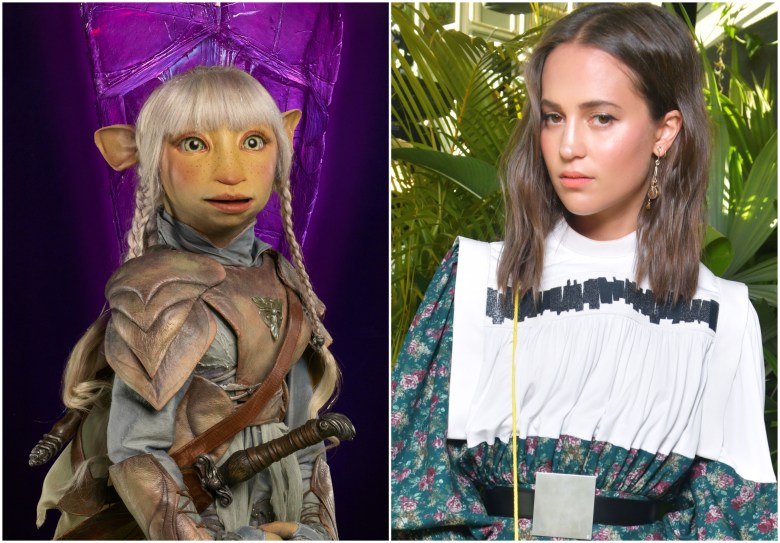 The “Tomb Raider” and “Ex Machina” star plays the castle guard and girlfriend of Rian. 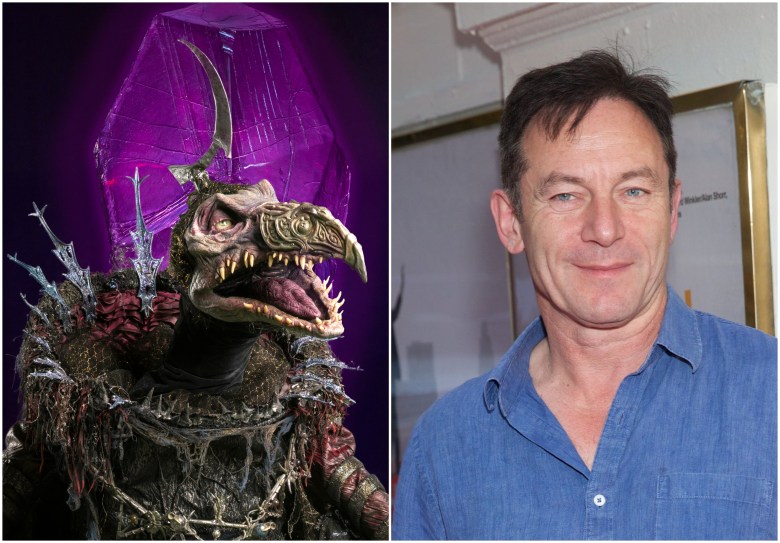 The star of “Star Trek: Discovery, “The OA,” and “Harry Potter” provides the voice for the leader of the Skeksis who has a secret weapon. 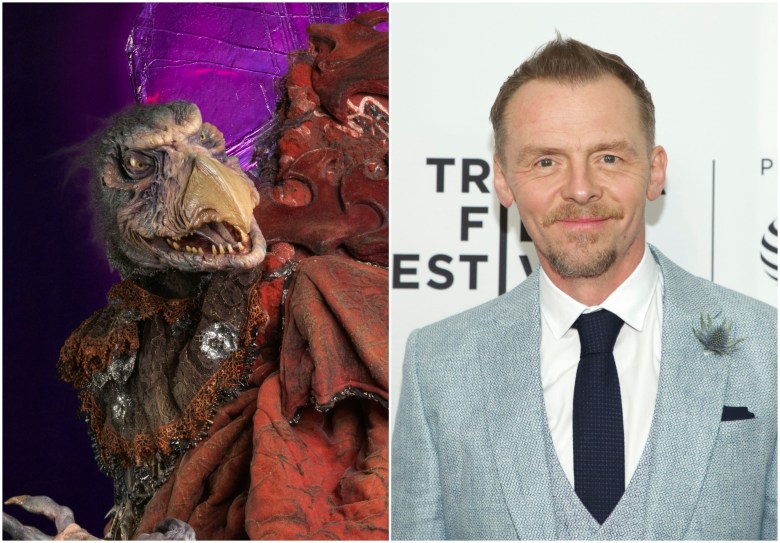 “Star Trek” and “Shaun of the Dead” star Simon Pegg plays the wily, scheming, and ambitious member of the Skeksis.

The Collector (skekLach), voiced by Awkwafina 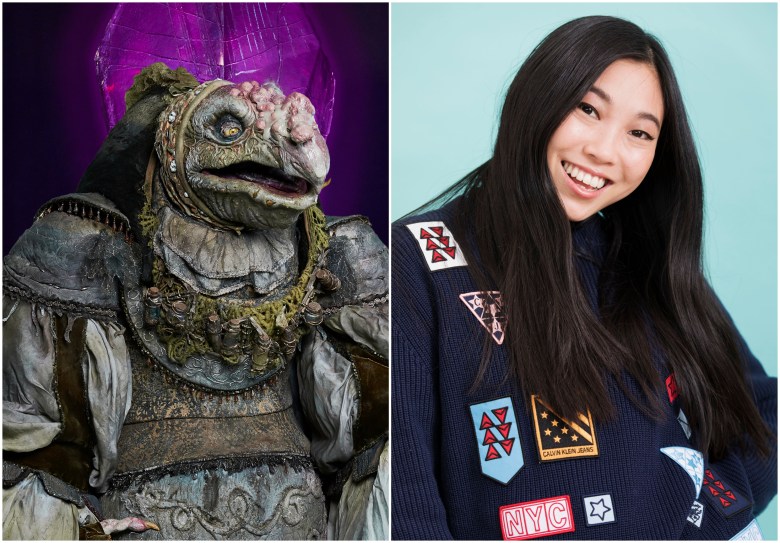 “The Farewell” and “Crazy Rich Asians” star gives voice to this disease-ridden Skeksis who collects the tributes from the Gelfling. 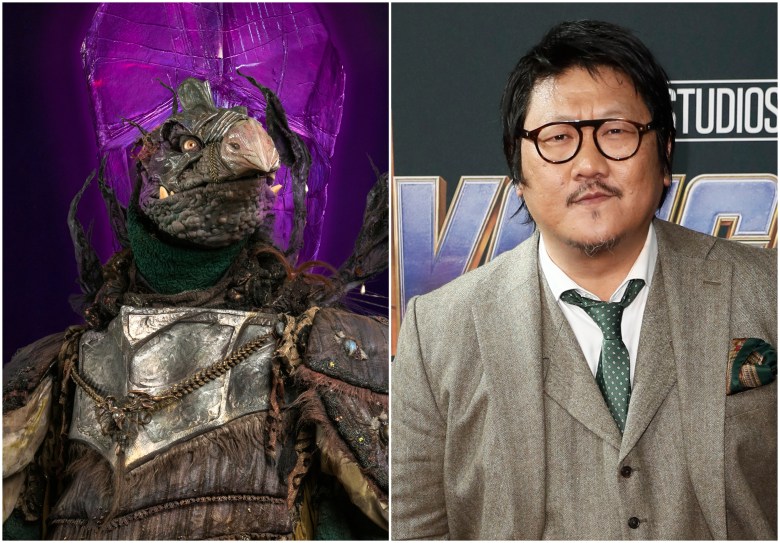 Wong, lately of the MCU and Syfy’s “Deadly Class,” plays the hot-tempered Skeksis who’s loyal to the Emperor. 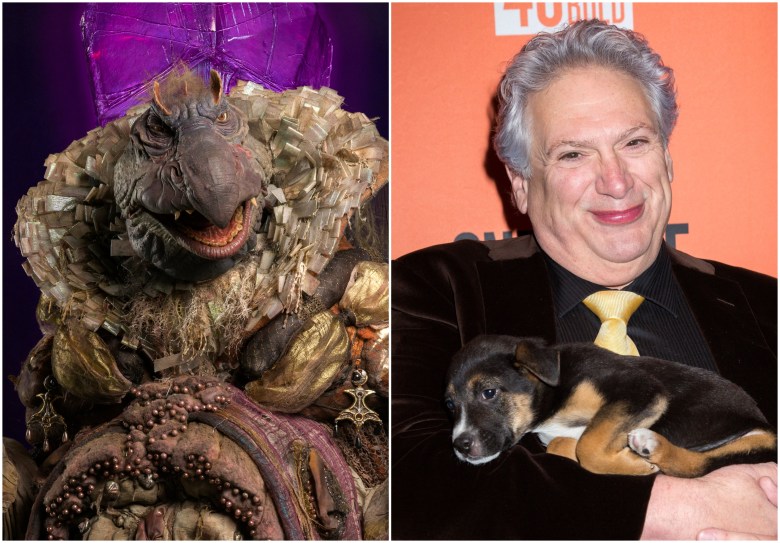 The multiple Tony winner plays the Skeksis who organizes the elaborate banquets. 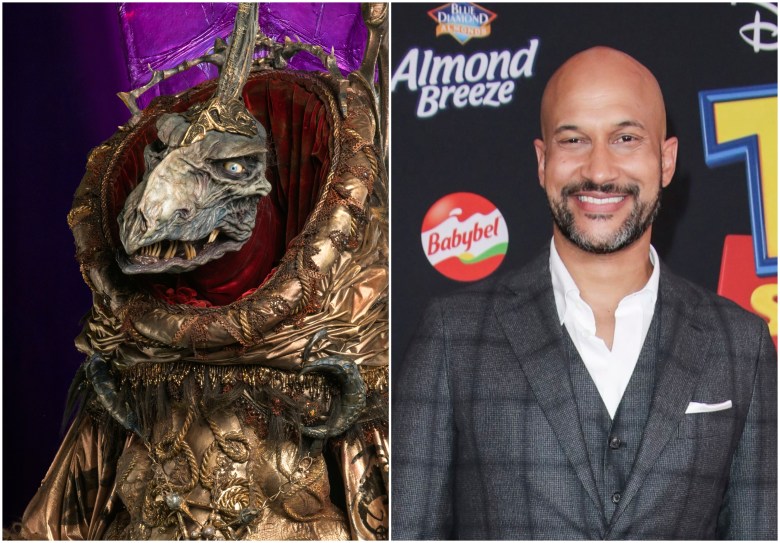 The “Keanu,” “Friends From College,” and “Brain Games” star portrays the Skeksis who’s responsible for guiding the group’s cultural practices. 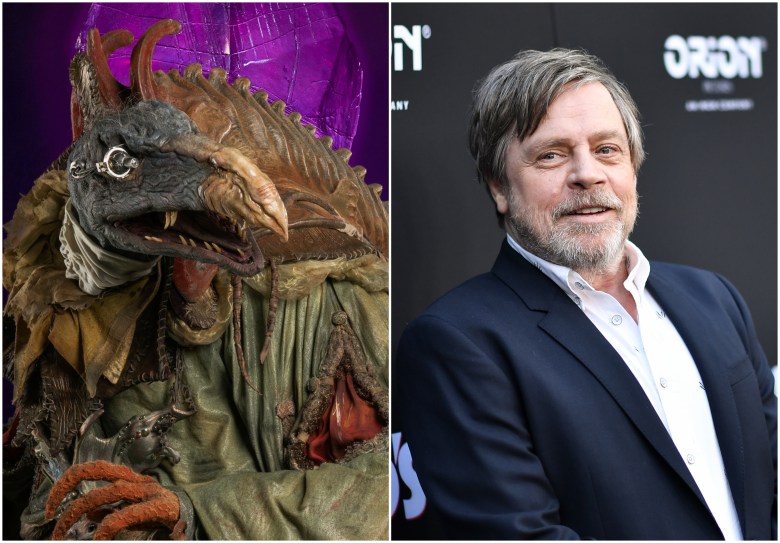 The “Star Wars” veteran plays The Scientist, who developed the technology that harnesses the essence from creatures through the Dark Crystal. 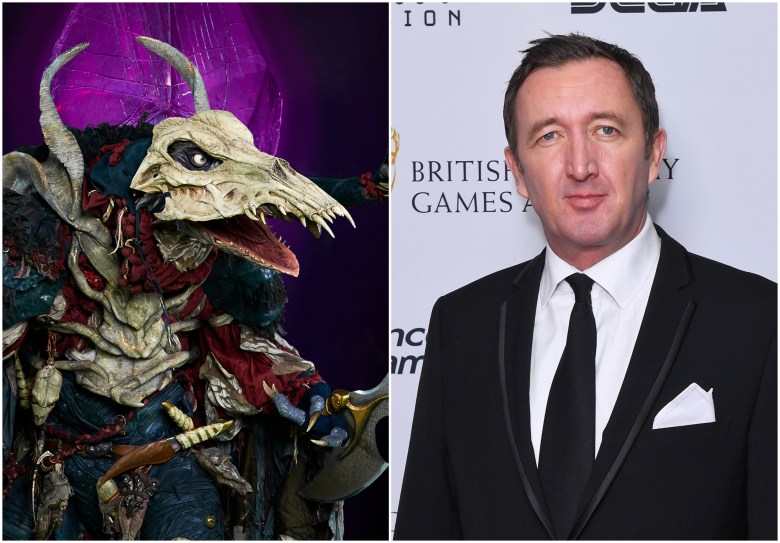 This “Chernobyl” and “Game of Thrones” alum plays the Hunter, an unusually nimble Skeksis who lives away from the Crystal Castle as he hunts. 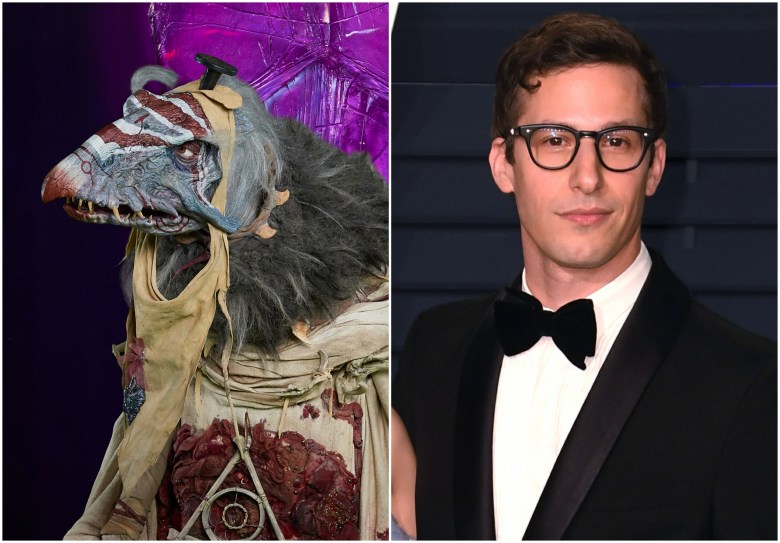 The comedian gives voice to the goofy Skeksis outcast who believes that the Skeksis should reunite with their Mystic other half to once again become the urSkeks. 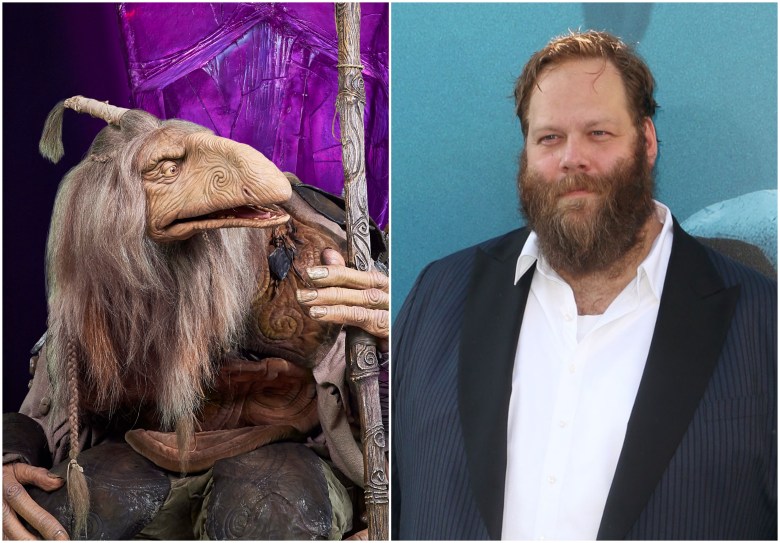 Seen in “True Detective,” “The Missing,” and “The Widow,” Ólafsson provides the voice of the Archer, who is the Mystic counterpart of the Skeksis known as The Hunter. He’s also a friend of Mother Aughra. 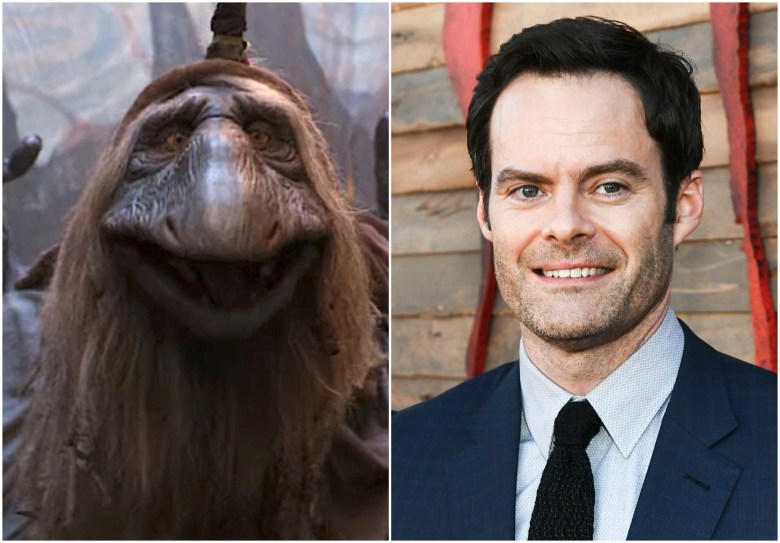 “Barry” star and comedian Bill Hader provides the voice of The Wanderer, who is the Mystic counterpart of the Skeksis known as The Heretic. He enjoys putting on puppet shows.

“The Dark Crystal: Age of Resistance” is currently streaming on Netflix.