TIFF: Donna Tartt's bestseller doesn't fly on the big screen, as "Brooklyn" director John Crowley adapts it into one of the year's dullest films. The big problem with “The Goldfinch” — a lifeless film that doesn’t consist of scenes so much as it does an awkward jumble of other, smaller problems stacked on top of each other like kids inside a trench coat — is that it mistakes its source material for a great work of art. That critical error isn’t an overestimation of Donna Tartt’s blockbuster novel of the same name, so much as it is a categorical mischaracterization. Perhaps even an unavoidable one.

The book, a vivid but ridiculous neo-Dickensian epic that borrows its title from the 17th-century Carel Fabritius painting at its core, is an improbable bildungsroman about the immortality of beautiful objects. Tartt’s novel became controversial among critics in the same way that anything so popular and acclaimed invariably does, but the story’s proximity to the great masterpieces of Western culture left fans convinced that it belonged among them, and inspired detractors to read it for filth.

In truth, “The Goldfinch” probably falls somewhere in between, but the Hollywood adaptation — a gauzy, bloated slab of Oscar bait — was always going to have to pick sides. And “Brooklyn” director John Crowley, hired for his ability to eke cinematic beauty out of literary grace, made the obvious choice.

Despite being reduced from a 784-page novel to an 144-minute film, “The Goldfinch” still regards its source material with reverence, and trusts it the way some people might trust a holy text. Crowley and screenwriter Peter Straughan (“Tinker Tailor Soldier Spy”) seem to have thought that Tartt’s story is a sacred thing, and that simply capturing it on camera would be enough to guarantee at least a hint of residual greatness. Alas, when stripped of its softer details and denied the sheer velocity of its narrative sweep, the story “The Goldfinch” tells feels utterly absurd.

Which isn’t to suggest that Crowley’s film doesn’t make any changes to fit “The Goldfinch” into a new frame; whereas the book trusted in its unfussy structure, the movie is broken into shards. Straughan rips out the spine of Tartt’s novel and rearranges its vertebrae until the story can’t stand up straight. The first segment introduces us to a long and handsome twenty-something named Theo (Ansel Elgort, radiating a conflicted sense of refinement) as he sits in an Amsterdam hotel room and contemplates suicide. From there, it whisks us back eight years earlier, when Theo — now a shy and unformed tween played by “Wonderstruck” star Oakes Fegley — shows up to a friend’s posh Manhattan apartment after surviving a disaster of some kind.

With our mouths pressed to a maddeningly slow faucet of basic information, we learn that Theo’s mom has just been killed by an explosion at the Metropolitan Museum of Art, where their morning together had been interrupted by a right-wing terrorist bombing (Theo avoided the blast because he was standing in front of the Fabritius in order to keep staring at a red-headed girl named Pippa).

Arriving at the Barbour residence with debris on his shirt and a painting-sized parcel hidden in his backpack, the lower-class Theo unknowingly inserts himself into a fragile WASP’s nest that will never let him go. Theo, who somehow connects with the wounded Pippa and her antique dealer guardian (Jeffrey Wright), becomes close to his friend’s sensitive mother (an understated Nicole Kidman) and seems on the brink of adoption when his broadly opportunistic birth father (Luke Wilson) escapes from whatever Disney cartoon he came from and shows up to reclaim his son (Theo’s dad is accompanied by a woman named Xandra, whom not even Sarah Paulson can save from feeling like one of Hilary Swank’s relatives from “Million Dollar Baby”). 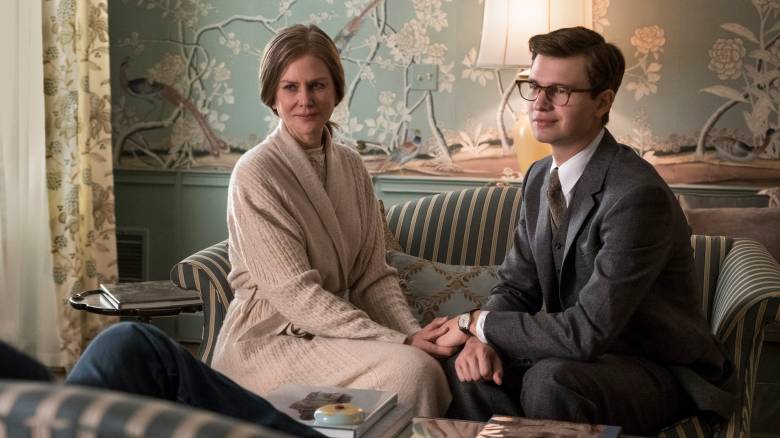 And just like that, Theo’s wild destiny takes him West, where a Russian vampire named Boris (a woefully miscast Finn Wolfhard) teaches him about drugs and domestic abuse. The leaden inauthenticity of these scenes is sometimes interrupted by episode-length glimpses into the future, as the film impatiently reminds us that Theo will grow into a successful opiate-snorting adult whose fairy tale life is built on lies, deceptions, and any number of other things that tether him back to the Barbour family and the horror that first brought him to their doorstep. If this doesn’t sound like a movie that might organically build to a shootout with some Dutch gangsters halfway across the world, that only feels more incongruous when you’re actually watching it happen.

If this story was always kind of absurd, at least the book had a way of divining cosmic beauty from sheer coincidence; Tartt’s floral writing and forward motion created a world in which destruction and wonder were inextricably entwined, and the traumas her young hero suffered became the very things that made the rest of his life feel so possible. Each unlikely twist in her winding narrative rippled out from the water displaced by the last, so that a decade-spanning tale could skip between years, continents, and genres with a sense of tonal continuity.

The film takes another approach: Crowley’s simple direction flattens the entire story into a styleless mash, while Straughan’s nonlinear screenplay knots it into a self-conflicted tangle. The result is a stately, lugubrious mess that feels at odds with such an eccentric adventure. Even the more natural plot developments seem farcical, and even the most pointed moments feel empty. It’s weird the first time someone from Theo’s childhood instantly recognizes him as an adult — it’s hilarious when it happens again after a virtual stranger clocks him on a New York City street.

This is a story fascinated by the ways in which people learn to disguise themselves, and a more nuanced telling might have explored Theo’s failure on that front. In a movie that confuses post-traumatic flashbacks for genuine depth, maybe it shouldn’t be surprising that everyone can see right through him. But all that lies under the surface is a couple of hollow montages where a pair of Radiohead songs do most of the heavy lifting, and a triple-underlined metaphor about the authenticity of antique chairs: The world will break you down, but our time on Earth is defined by how we manage to reforge ourselves. “Love your life, poor as it is,” Thoreau once wrote. But poor Theo doesn’t get much of a chance — he’s just a passenger in this dull and rootless adaptation, dragged along his destiny on autopilot until he learns that he wasn’t really lost in the explosion that ripped through his childhood.

Beautiful but wilting, Elgort is a fine Theo — his curled smile hides someone who’s uncomfortably suspended between lies and the truth. If only his scenes weren’t so entombed by their brute narrative purpose; if only this film were ever informed by the primacy of self-awakening. Fegley has an even tougher go, as the best parts of his section are undermined by stilted editing, and the worst are left to die in the Nevada desert. “The Goldfinch” continually reminds us that Theo has an exciting life in store for him, and we can’t wait for the movie to get there. When it finally does, we can’t wait to leave Theo behind altogether.

Sure to disappoint anyone who watches it with great expectations, this moribund adaptation doesn’t quite lose “something that should have been immortal” (to quote Theo’s self-loathing appraisal of the Fabritius painting), but if “The Goldfinch” hadn’t been weighed down by the gravity of great art, it might at least have been able to get off the ground.

“The Goldfinch” premiered in the 2019 Toronto International Film Festival. Warner Bros will release it in theaters on September 13.

This Article is related to: Film, Reviews and tagged Reviews, The Goldfinch, TIFF