No movie that features Robert Pattinson as a sociopathic dauphin should feel this flat or familiar, but "The King" squanders its cast. 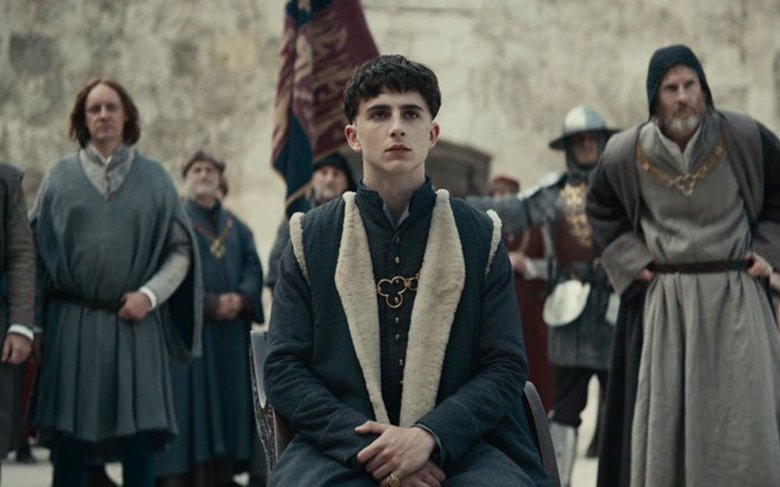 A large-budget, medieval war movie that’s loosely based on Shakespeare’s “Henriad” and the historical events that inspired those plays, David Michôd’s “The King” is so eager to be a mud-and-guts epic about inherited violence and the corruption of power that it loses sight of the rich coming-of-age story at its core. It’s hard for a good man to be king, and it’s even harder for a king to be a good man — that idea only feels relevant to the modern world because it’s been true for every one of the last 600 years, and “The King” has nothing especially new or insightful to say on the subject.

What “The King” does have is Timothée Chalamet as a soft prince who would rather sleep in his bed than sit on the throne, and Robert Pattinson (if only for three scenes) as a hilariously sociopathic dauphin who looks like Klaus Kinski and talks like a castrated Pepé Le Pew. It has “Leave No Trace” star Thomasin McKenzie in a blink-and-you’ll-miss-it role as the Queen of Denmark, and a razor-sharp Lily-Rose Depp looking so much like Vanessa Paradis it’s hard to tell if she’s her daughter or her deepfake. And yet despite this stacked deck of generational talents, the film would rather turgidly rehash its most basic themes than allow these actors to work through them; it would rather make broad gestures toward the notion that personal agendas shape political history than offer an intimate take on how it must feel for someone to lose themselves in that process.

Michôd and co-writer Joel Edgerton take some necessary liberties with the source material in terms of both language and content — the changes to Falstaff, who Edgerton plays with bruised wistfulness and boisterous warmth, are particularly inspired — but the center doesn’t hold when they try to consolidate this multi-generational saga and splash it across a massive canvas at the same time. It’s as if they weren’t paying attention when fellow Australian Baz Luhrmann taught the world his greatest lesson: It’s hard to improve on the Bard, but if you’ve somehow managed to score Venice Beach, pre-“Titanic” Leonardo DiCaprio, and the rights to Radiohead’s “Talk Show Host,” then you should milk them for everything they’re worth.

Michôd (whose potential was announced with “Animal Kingdom,” realized with “The Rover,” and dulled with early Netflix disappointment “War Machine”) has a natural flair for dank grandeur, and that talent is on full display in a gruesome opening shot that introduces us to the kill-or-be-killed world of “The King.” The year is 1413, and King Henry IV (a stringy Ben Mendelsohn, doing his thing) is an old man subsumed by malice and mistrust. His bloodlust has splintered England into civil war, a state that Michôd sells with an introductory image of the treasonous Henry “Hotspur” Percy (Tom Glynn-Carney) walking through a sea of fresh bodies.

It’s an ugly world that a pretty boy like Hal (Chalamet) wants nothing to do with. A pacifist with the soul of a poet and the body of a Tumblr idol, Hal would sooner get plastered in dingy Eastcheap pubs with his friend and bodyguard Falstaff than sit in court and foment violence with his father. He doesn’t even want to be King after Henry IV dies; he’s perfectly happy letting that burden go to his vain younger brother, Thomas (Dean-Charles Chapman, who practiced being ill-suited to rule when he played Tommen in “Game of Thrones”).

The film’s best scene illustrates the differences between these siblings, as Hal — hoping to spare Thomas from needless slaughter — shows up to duel Hotspur in his place. The resulting throwdown isn’t only one of the most realistic fights that has ever been staged between two men in massive suits of armor (it’s all huffing and puffing and tackling each other), it’s also an uncommonly lucid expression of Hal’s inner conflict. He isn’t interested in power, only in peace. Brave but naïve, he doesn’t seem to appreciate the irony of having to brutally murder someone in order to prevent bloodshed; he thinks this will be the only time. Chalamet never acts that false confidence. The strength of his performance is in how he lets the uncertainty bubble through him like indigestion, headstrong and shaking from the neck down — he’s never looked younger than he does in this movie. 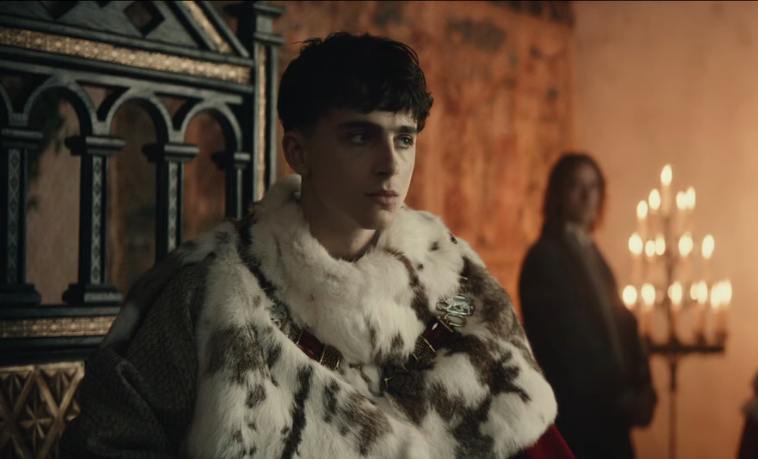 When Hal is crowned Henry V at the end of the first act — and given a terrible pageboy haircut that royal stylists clearly modeled on a young Don Draper — “The King” begins to teeter on the edge of a knife: You have to believe that Henry is competent but vulnerable; that he’s his own man, but susceptible to the influence of all the other men around him (most of all royal advisor William Gascoigne, played by a hunched Sean Harris). The loyal Falstaff insists that “A king has no friends; a king only has followers and foes,” but Hal is too young to hear him clearly. To paraphrase a poet by the name of Britney Spears, he’s not a boy, not yet a leader. But Michôd doesn’t seem much interested in exploring the difference. Within seconds of assuming the throne, Hal picks up where his father left off, chopping off heads and being provoked into conquering the whole of Christendom. Does absolute power corrupt? Absolutely. But it usually doesn’t happen overnight.

By the time Hal leads the English army into France — embarking on a long slog that’s depicted with all the sweep of an afternoon stroll — he’s already lost sight of what he’s fighting for, and so have we. Hal is developmentally stunted for much of the film’s tired second act, as all of the emotional texture is shifted onto Falstaff’s shoulders; the eponymous sovereign is all but reduced to a witness in his own story, as all of the nuanced adolescent frustration that ripples across Chalamet’s face wells up with nowhere to go. There are any number of scenes in dingy tents where it’s clear that other people are pulling the strings, but “The King” is so happy to gawk at the simple mechanics of power that it seems impossible Hal wouldn’t feel how he’s being manipulated.

Nicholas Britell’s stirring but unremarkable score — best when it’s jangly or playing with strings — is left to drag the story along, while Pattinson’s glorified cameo (and glorious comic relief) steals the movie from the clutches of tedium. Michôd, commanding a production that may have been too large and unwieldy for him to steer with his usual precision, displays little of the demented genius that made “The Rover” so much fun, and little of the steely patience that made “Animal Kingdom” so agonizingly tense. The Battle of Agincourt promises to be a perfect venue for him to show off his chops, but it ends up feeling like a miniature model of the Battle of the Bastards from “Game of Thrones.”

Michôd excels when he gets low to the ground, following the ever-eager Chalamet through an absolute shitstorm of sopping-wet Earth as Hal crawls toward his father’s dream. Few actors seem to want it worse than Chalamet, and the power of “The King” radiates from that powerful desire to go to hell and back in order to get the job done. There’s no doubt that he’s more self-aware than the character he plays here, who’s mercifully confronted by his own guilelessness in a shaky third act that’s capsized by a wallop of Shakespearean flair. “The King” will be no one’s crowning achievement, but it’s safe to assume that Chalamet’s rule has just begun.

“The King” premiered at the 2019 Venice International Film Festival. Netflix will release it in theaters on October 11. It will be available to stream on November 1.

This Article is related to: Film, Reviews and tagged Netflix, Reviews, The King, Venice