Meryl Streep stars in an anti-capitalist satire that takes a lot of strange detours. 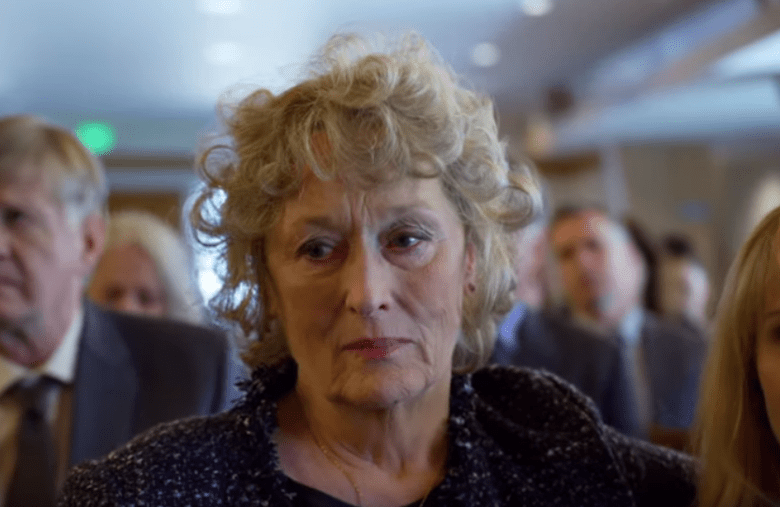 Steven Soderbergh excels at exploring the complex systems governing modern society with a delicious ironic tone. With “The Laundromat,” that tendency reaches a grandiloquent extreme. The director’s funny, searing look at the Panama Papers scandal unleashes a cavalcade of goofy fourth-wall-breaking explanations about shell companies, corporate tax laws, and offshore accounts. It has a gun-toting Meryl Streep shooting up a fraudulent insurance company, primitive cavemen to explore the origins of supply and demand, and a cameo by Will Forte as “Doomed Gringo #1.” There’s no telling where this movie will go in its quest to shake up a dense subject.

Needless to say, “The Laundromat” stuffs a lot of information into 95 minutes. The slapdash narrative doesn’t always click, and some of the devices are so on-the-nose one can practically hear Soderbergh and screenwriter Scott Z. Burns cackling at their cleverness. At the same time, the frisky energy of “The Laundromat” turns its “money-laundering for dummies” conceit into a robust anti-capitalist screed, so that even the dopey cameos and cartoonish metaphors come tinged with the queasy sense that the bad guys are laughing hardest at every joke.

That’s largely because they get to tell the story. From the opening slow-zoom on a green-hued Ben Franklin, “The Laundromat” is narrated in bursts of smarmy explanations from Jurgen Mossack (Gary Oldman) and Ramón Fonseca (Antonio Banderas), the two Panama-based lawyers whose firm Mossack Fonseca was at the center of the April 2016 revelations from the International Consortium of Investigative Journalists. The actors’ uncanny resemblance to their real-life counterparts pairs nicely with their own stardom: Who better to explain the giddy excitement of financial conspiracies than wealthy A-listers playing off their own fame? With “Ocean’s Eleven” composer David Homes’ ebullient score guiding the saga along, Soderbergh applies the language of a playful heist movie to real-world problems.

And what problems: The 11.5 millions documents showcased global tax evasion by thousands of companies registered with Mossack Fonseca, covering up an astounding list of criminal activities. The process behind reporting out those revelations has been ably covered in Alex Winter’s 2016 documentary “The Panama Papers,” and journalist Jake Bernstein’s 2017 tome “Secrecy World,” which provides the official source material for the movie. But Soderbergh and Burns have folded that information into a freewheeling ensemble piece framed by its villains from the outset.

That device gets heavy-handed rather fast, as the pair wander from ancient times, explaining the evolution of supply and demand, into a neon-soaked party to represent the inner workings of the one-percent. But “The Laundromat” grows far more intriguing when it settles into a series of overlapping dramas to illustrate the sheer international scale of Mossack Fonseca’s corruption.

Chapter-based installments careen from Vegas to China, Mexico to the West Indies, but none of the many characters stand out more than Ellen Martin (Streep), a sweet-natured grandmother who learns after her husband dies in a boating accident that the company’s insurance scheme leaves with her no settlement.

Baffled by the circumstances and keen on finding answers, she follows the bread crumbs all the way to the West Indies, though she spends much of her time quietly observing the moving parts of a machine much larger than she can fully comprehend. Streep’s complex screen presence is such a natural fit for Soderbergh’s tonal high-wire acts it’s a wonder it took this long for the pair to work together. This is the sort of deadpan performance Streep can do better than anyone — fierce and innocent at the same time, angry with the system and dwarfed by its many moving parts.

Other notable faces come and go, from Jeffrey Wright as a Jamaican legal hustler to Nonso Anozie as a philandering African businessman who pays off his daughter to hide his affair. In China, Matthias Schoenaerts surfaces to suffer a gnarly fate at the hands of a wealthy Chinese politician’s wife, Sharon Stone’s a two-faced real estate broker, and Larry Wilmore makes for a terrific smirking attorney who rattles off the benefits of a trust fund. Many of these fleeting moments serve as a wink to the audience, allowing the familiarity to guide them through a thorny maze of circumstances that would otherwise seem awfully dry.

Soderbergh usually sneaks canny stabs at modern capitalism into his lighter works (consider the role of the 2008 recession “Magic Mike”), but “The Laundromat” reverses that formula. “The Informant!” by way of “Schizopolis,” it careens through each mini-plot in an exuberant quest to explain scams that most people don’t understand until they become the victims (and even then, it’s tricky without an accounting degree). Burns’ script pairs measured breakdowns of financial concepts (“Credit is just the future tense of money”) with lucid assessments of various crimes in play (“The world is just men hiding behind piles of paper”).

Soderbergh has said that he was inspired in part by Argentine director Damian Szifrón’s delirious dark comedy “Wild Tales,” a brilliant anthology of savage comic circumstances with sharp social commentary to spare. But “Wild Tales” did a lot more showing than telling, while “The Laundromat” applies the opposite strategy with messier results. Even some of the better tangents lead to obvious outcomes: By the time the movie arrives at Anozie’s character talking his college-aged daughter (Jessica Allain) out of telling her mother about his girlfriend, the revelation that the man is hoodwinking his kid feels so inevitable it may as well be explained upfront.

Still, Soderbergh seems to be reveling in his loose approach, evoking the sheer density of his subject matter through the ongoing absurdity as he keeps stacking the deck. (At one point, Mossack even loses track of where to look into the camera as he attempts to size up the big picture for the audience.) In his biggest meta twist since Julia Roberts impersonated Julia Roberts in “Ocean’s Twelve,” Soderbergh’s narrators even drag him into the picture, noting that the film’s director holds five companies in Delaware to exploit that state’s loose tax laws.

Many of these silly devices belie the darkness operating beneath the surface, but “The Laundromat” throws subtlety to the wind when it calls out the loopholes that allow the wealthiest people in the world to invent their own rules. As its cynical lawyers celebrate their freedom, the movie stuffs the apocalyptic reasoning of “Dr. Strangelove” into “Wall Street,” explaining the process through which bad guys get away with greed in a country where greed is good.

While “The Laundromat” amounts to feature-length finger-pointing, there’s no denying the underlying appeal of Soderbergh’s indictment for the way it breaks down corruption into bite-sized summaries. A close cousin to “The Daily Show” school of thought, the movie uses punchlines as a shrewd Trojan Horse to reveal the machinations of a broken system.

But that can only carry the material so far. “The Laundromat” finally gives up all of its artifice and hands the mic to Streep, as she turns the words of the Panama Papers whistleblower known only as John Doe into a galvanizing monologue about the nature of democracy. In her capable hands, the moralizing cuts deep. “The Laundromat” may be blunt, and the humor hit-or-miss — but it swings wildly at a worthy target, and eventually hits its mark.

“The Laundromat” premiered at the 2019 Venice International Film Festival. It will be released theatrically by Netflix on September 27 followed by availability on the platform October 18.

This Article is related to: Film, Reviews and tagged Reviews, Steven Soderbergh, The Laundromat, Venice