Exclusive: "Balloon" takes aim at our obsession with superhero myths, which emphasizes strength and power as desirable masculine qualities. 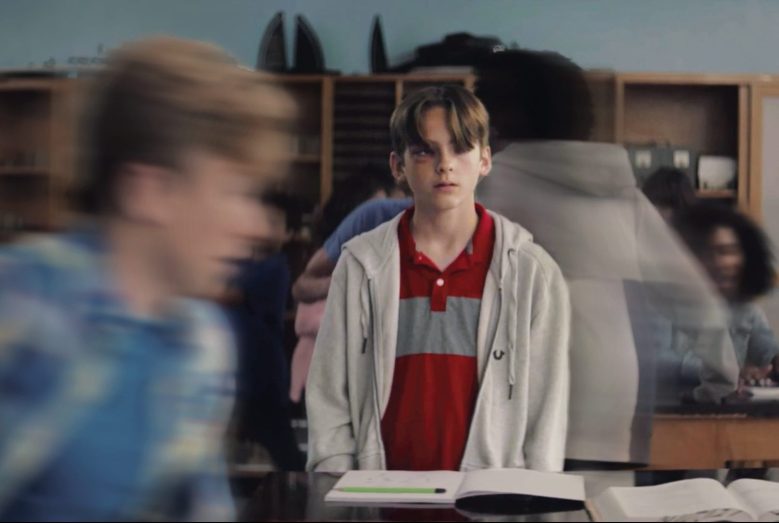 If “Joker” explores the genesis of a villain, “Balloon” — in which a young boy develops superpowers to fight his bullies — depicts the making of a hero.

Superhero movies have dominated mass media for the last 15 years, with no sign of slowing down. While Todd Phillips’ Joaquin Phoenix vehicle would like to position itself as an outsider of the genre, there’s no denying that its connection to DC Comics’ pre-existing intellectual property played a large part in the movie’s massive box-office success. In his emotionally vivid and delicately rendered short, queer filmmaker Jeremy Merrifield has crafted a timely critique of the superhero mythos, offering an alternative world that prizes softness and sensitivity over brute strength.

The film follows a 14-year-old boy named Sam (Jonah Beres) who is being bullied in between his school’s surreal active shooter drills. Amidst pressure to “hit back” and his closest friend abandoning him, he discovers superpowers that may offer a different solution. “Balloon” debuts online today, exclusively on IndieWire.

“With the slew of disappointing male leaders in the news, the only reliable role models are the ubiquitous masked superheroes in our movies — and they aren’t even real,” the director wrote IndieWire via email. “The idea of the superhero is the perfect metaphor for an inner empowerment, but the genre really has come to be more about physical power — lifting up a dated, narrow idea of masculinity: the warrior. In the same way that princess culture was damaging to girls, I think superhero culture has been damaging to boys — teaching them they can punch through their problems.”

“Our cultural obsession with [superhero movies] points to our general obsession with a dated version of masculinity,” added producer Christina Cha. “Superhero movies are almost like shrines to a time when being a man meant being a warrior or a hunter-gatherer. But we need to expand our narrow idea of masculinity — because it’s literally killing us.”

Audiences will recognize Beres from his role in Hulu’s cult hit comedy “Pen15.” Funnyman Paul Scheer takes a turn from his usual comedy fare, playing a cop overseeing a routine active shooter drill in a powerful opening scene. Such drills have become an accepted reality for America’s kids, and Merrifield brings home the obvious but nonetheless controversial connection between onscreen and real life violence. It’s a concern that led to much hand-wringing over added security at “Joker” screenings, which has thankfully not led to any violence thus far.

“‘Joker’ is tremendous filmmaking. While watching it, I really felt a kinship with ‘Balloon’ in its desire to subvert the genre and really motivate story from the character,” said Merrifield.

“In ‘Joker,’ Arthur Fleck was bullied all throughout his life up until he had the power to take matters into his own hands. This was his solution to being bullied,” said Cha. “When Sam discovers his superpowers, he has a choice to either use it towards aggression or decide to elevate towards a higher place. In some ways, the difference between ‘Joker’ and ‘Balloon’ is just that one different choice each protagonist makes: to join the cycle of violence or not.”

“Balloon” picked up the top prize at the Oscar-qualifying HollyShorts Film Festival, making it eligible to compete for Best Narrative Short. With its timely themes and elegant narrative, Oscar voters could certainly go for the impactful drama. “Balloon” was directed by Jeremy Merrifield; executive produced by his husband Michael James Scott; produced by Christina Cha; and associate produced by Kate Chamuris.

This Article is related to: Film and tagged Balloon, Joker, Short Films