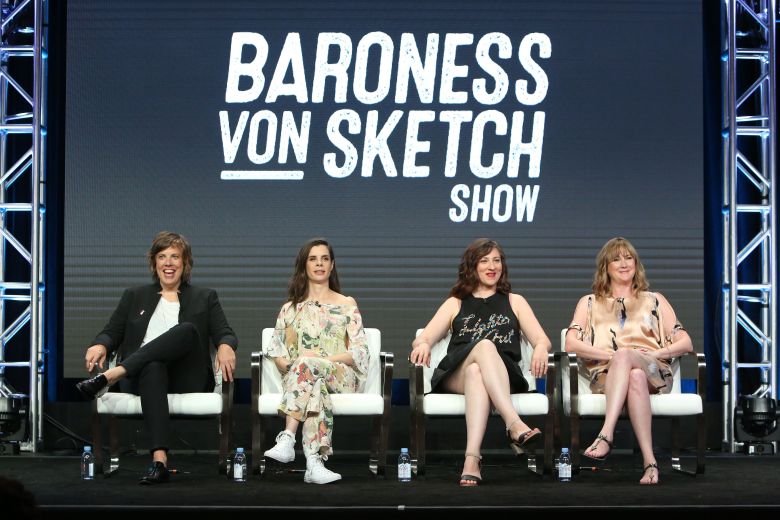 Everyone’s favorite Canadian sketch show (that’s currently airing new episodes and led by four women), “Baroness Von Sketch Show,” is coming back to IFC for its fourth season. And based on the official trailer, it’s still as poignant as ever, as it tackles things like: the horror and anger that comes with the realization that there are somehow full-blown adults who were born in the late 1990s, whether scrunchies are back in style and if they ever were “in style” to begin with, and the most important topic of all, binge-watching.

As IFC puts it: “‘Baroness von Sketch Show’ provides an insightful, satirical look at our everyday modern lives. Fast-paced and irreverent, the series celebrates the absurd and mines the embarrassing, offering a fresh, witty take on relatable moments such as crying at work, waiting in airport security lines, dealing with gossip-obsessed co-workers, co-parenting and more.”

Created, written, and performed by comedians Carolyn Taylor, Meredith MacNeill, Aurora Browne, and Jennifer Whalen (who also serves as showrunner), “Baroness Von Sketch Show” originally debuted on Canada’s CBC Television in the summer of 2016. The following summer, IFC brought the sketch comedy series to the United States, and the rest has been critically-acclaimed sketch comedy history. IndieWire’s own Jude Dry even called the series “the best sketch show on American TV,” despite (or maybe even because of) being made by four Canadian women over 40.

“The nice thing about being in your forties and having a career behind you is you realize there are no rules. You might as well do what you want, and you might as well create your own work because it’s the kind of business where no one is going to do it for you,” said Whalen to Dry. “We’re in a fortunate position that we wear so many hats. We’re involved in front of the camera and behind the camera, so we can see our vision through and we can write ourselves parts that nobody else would. It’s empowering, because we’re not waiting for the phone to ring.”

“Baroness Von Sketch Show” returns to IFC on Wednesday, October 30 (with two back-to-back new episodes every week). You can watch the trailer for its upcoming 10-episode fourth season below: