[Editor’s note: This review contains spoilers for all four episodes of “Catherine the Great”, as well as a substantial portion of 18th century Russian history.]

The first thing you have to know about this telling of the life of Empress Catherine the Great of Russia is that star and executive producer Helen Mirren, wearing an Chopard black opal and diamond necklace with roughly 40 billion carats, arrived at the London premiere in an 18th century sedan chair carried by four men. 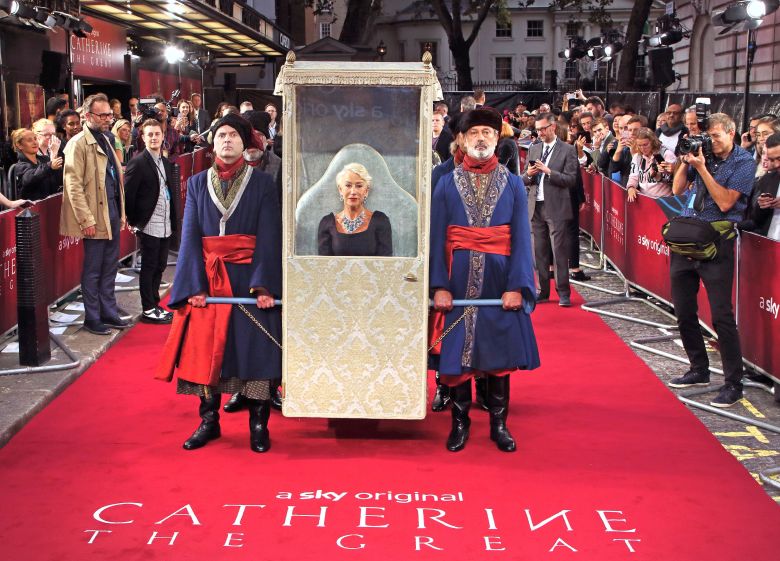 This is not, in other words, a production that skimps on the opulence. Nothing is subtle about it: not the acting, not the directing by Philip Martin, not the production design, not the costumes. It’s full-tilt scenery-chewing glamour in every frame of every scene; I weep for the loss of the entire planet’s gold leaf that was harvested to make this miniseries.

And, for the most part, it works. Mirren is in full DAME HELEN MIRREN mode, regal and saucy and steely by turn. This is a role for bombast: Catherine is a woman who killed her own husband to take the throne and, while acquiring that elusive Black Sea port and sleeping her way around the Motherland, so pissed off her son that after her death he put a law on the books that a woman would never rule Russia again. (Paul I of Russia, played with smarmy worminess by Joseph Quinn, was an idiot who was emperor for a hot minute — but, notably, a woman hasn’t ruled Russia since.)

This story focuses heavily on Catherine’s relationship with Grigory Potemkin (Jason Clarke) and their perfect matched appetites for sex, war, and intrigue. Clarke has the harder role — not because he’s called upon to be any subtler, oh no — but because he has to be both ambitious and a believably subservient lovelorn sot to a woman who has a habit of killing people who get too close to her power.

Playing off Mirren’s charisma really lifts his performance up; she and Clarke’s battle of egos and petty jealousies and grandiose gestures of love are amusing. (In Mirren’s autobiography, “In the Frame,” she gives one lonely page to her relationship with Liam Neeson — which, first off, #pettygoals; later, on “The Graham Norton Show”, she described their affair as “We didn’t date, we lived together for four years. We were a serious item for a while. Lucky me!” There is a lot of that vibe between Mirren and Clarke.)

The problem with these two gilded sociopaths building an empire, however, is that it gets repetitive. You can’t just defeat the Turks and invade Crimea once and be done with it, apparently. The script, by Nigel Williams, who also wrote “Elizabeth I” starring Mirren, is clunky.

Without a second screen open to Wikipedia to follow the timeline, the military threats start to bleed together; at one point Catherine mentions in passing, with her back to the camera, what a shame it was that Louis was beheaded in France. Various Russian Cabinet Members of the Narrative Aside Division come and go after delivering a couple of lines setting the stage for whatever genocide is happening overseas at the moment.

A succinct history lesson it is not — but with all these brocade vestments going awry and stockings being jettisoned from four-poster beds, do you really want it to be? “Catherine the Great” is for those looking for a sumptuous spectacle. Get your gilt on.

The four-part “Catherine the Great” premieres Monday, October 21 at 10 p.m. ET on HBO.