This time around, it’s an app that’s trying to kill a hapless bunch, but genuinely big laughs and clever nods to the genre amp up a tired idea. 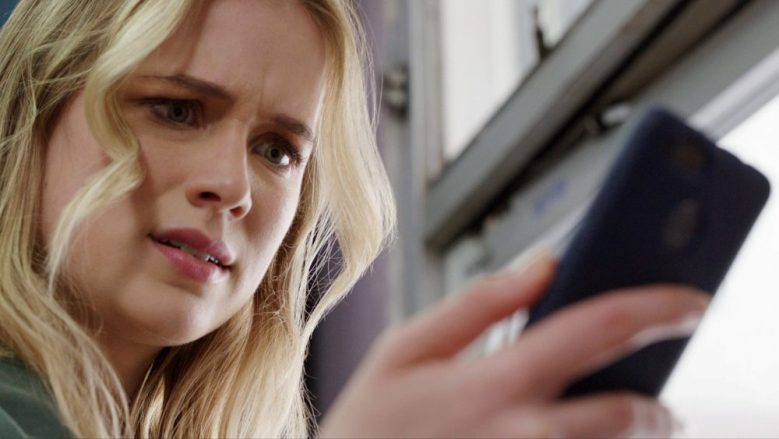 There are many things no one should do in a horror movie if they want to live — run back inside the house that holds the killer, have sex, play that haunted video tape, the list goes on — including a classic ripe for contemporary reinvention: Don’t play that weirdo parlor game. Bloody Mary is a bad idea, so is the Ouija board, and Light As a Feather Stiff As a Board has never led to anything good. Why not move that concept into a more modern space? Films about killer smartphones are hardly anything new, from “One Missed Call” to “Cell,” Skype-based offshoots like “Unfriended,” and even the forgettable “Jexi,” which came out in theaters mere weeks ago. But what about a movie about a killer app? “Countdown” fills that questionable void.

Initially a silly distraction at a raging house party, the titular app arrives with little fanfare — a glitch in a search of a weight loss app called “Countdown to Skinny” calls it up instead — and a beer-swilling table of pals can’t escape the allure of its promise to tell users the exact time of their death. (“It’s just an app!” Oh, how they will learn.) First-time filmmaker Justin Dec plunges right into the mayhem before the opening credits even roll, presenting his killer gimmick and offing some innocents in gruesome fashion along the way. A less disturbing “Final Destination” knock-off with a genuine sense of fun, “Countdown” is disposable escapism, but at least attuned to its limited appeal.

The first victim: Courtney (Anne Winters), who rightly freaks out when the app gives her mere hours to live, and who makes a valiant attempt to outrun her inevitable demise. Does activating the app activate death? It’s an idea Dec never quite resolves, though the film’s tension-filled opening makes a case for the possibility that downloading Countdown can lead to a cascade of small incidents that add up to big, terrible, bloody demise. With Courtney dispatched in a chilling early sequence, “Countdown” turns to the questions of inevitability and fate that will haunt the rest of its running time. Courtney was meant to die in a car accident, and in running away from her drunk driving boyfriend, she only makes things worse.

Said boyfriend (Dillon Lane) understands that pickle instantly: All it takes is a tree branch through the seat Courtney had just occupied for him to realize that the app wasn’t lying, and yes, he should definitely download it right now, too (which, of course, means he also has mere hours to live). Eventually, “Countdown” arrives at its actual star, sugar-sweet nurse Quinn (Elizabeth Lail), who listens to a shellshocked Evan rant about his imminent death from his hospital bed. Despite obvious reasons for her to abandon ship, Quinn can’t help but dig deeper.

It’s the sort of thing that should be a tough sell to anyone with a brain, and Lail works mightily to overcome the wackiness of the plot in order to catapult her into Final Girl territory with the minimum of fuss. Perhaps the gut punch of Countdown’s death clock — by the time Quinn gets the app, she has less than three days to live — is enough to motivate her into a state of butt-kicking and intelligence-gathering that surprises after an introduction that only plays up her sweetness. Dec attempts to circumvent that character weirdness by threading in a hefty amount of backstory to Quinn’s life, from her mother’s death that splintered her family to a #MeToo-esque issue with her icky doctor boss (Peter Facinelli). It all adds up in the end, and Dec doesn’t pad out anything that’s not totally necessary, but it also prevents the movie from shaking its paint-by-the-numbers feel.

But “Countdown” isn’t trying to reinvent the playbook, and has been layered with self-aware gags and winking jokes that mostly work (Lail makes off with plenty of over-the-top freakouts that keep the humor running high). Nothing is as funny as the app itself, which offers up amusing notifications at a steady clip, including the repeated admonishment that people are breaking their user agreements (yes, this will prove important later), screaming-tone alerts, and perhaps the funniest visual gag in the entire film: the revelation that Countdown has a 3.6 rating on the app store.

For all its chuckles, the app is a real monster, one that appears to favor transportation-based deaths, lots of cars careening out of nowhere, drunk drivers, even the hint of a train disaster. That’s to say nothing of the supernatural threats that start appearing to Quinn and her eventual sidekick Matt (a charming Jordan Calloway). It’s a lot to take in, and while such a bevy of beasties offer plenty of excuses for jump scares, little of it makes much sense.

The mechanics of the app and its death wish for its dum-dum users are hopelessly murky for much of the film’s first half, and the gimmick never develops a real sense of dread. Eventually, Quinn and Matt make contact with an uproarious, devil-obsessed priest (P.J. Byrne) who has never actually been part of an exorcism but really, really wants to. He’s got the details of what’s going on down pat, delivered during an exposition-laden meeting that nods firmly to horror movie lore and has the good grace to sneak in some incredibly silly jokes about GrubHub along the way.

Despite its contemporary sass and thoroughly modern technological threat, “Countdown” adheres to classic, often predictable narrative beats. Dec nearly works his film out of the conundrum with his ability to poke fun at a genre he clearly loves, but “Countdown” sags back into the old ways soon enough. The movie arrives at an eye-roll inducing final twist, and hints at an inevitable sequel. But this app isn’t exactly begging for an upgrade.

STX Entertainment will release “Countdown” in theaters on Friday, October 25.

This Article is related to: Film, Reviews and tagged Countdown, Elizabeth Lail, Reviews